Here are the profiles of the major candidates of the Tokyo governor election on July 5: 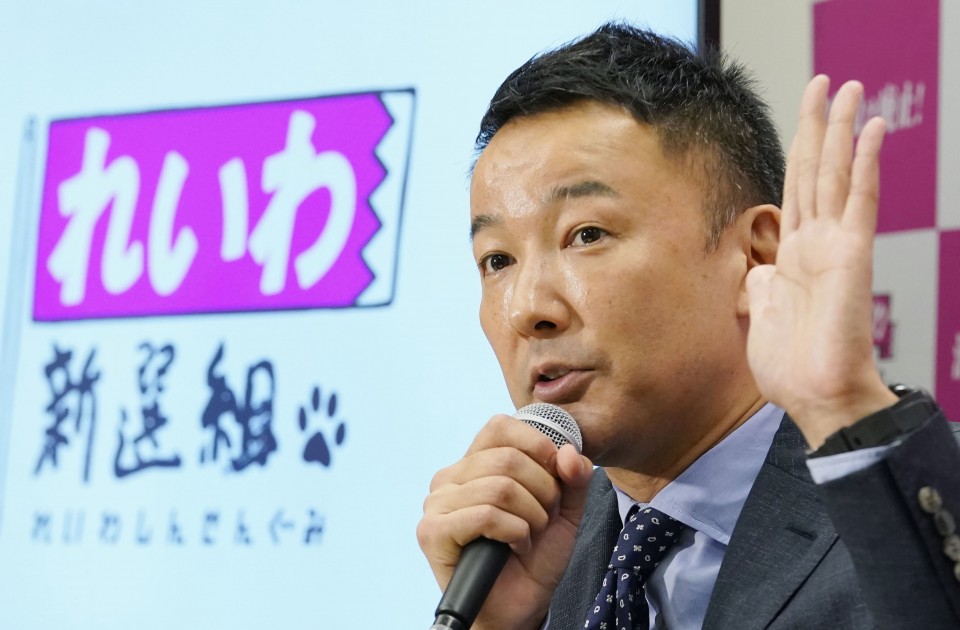 Taro Yamamoto, an actor-turned-politician who leads the anti-establishment party Reiwa Shinsengumi, speaks to reporters in Tokyo on June 15, 2020, announcing a plan to run in the July 5 Tokyo gubernatorial election. (Kyodo)

Actor-turned-politician Taro Yamamoto, leader of the anti-establishment political party Reiwa Shinsengumi, became known for his anti-nuclear activities following the 2011 Fukushima nuclear crisis and is a proponent of halving the consumption tax to 5 percent.

The 45-year-old Hyogo Prefecture native was first elected to the House of Councillors in 2013 from the Tokyo constituency but was reprimanded that same year for handing a letter on the nuclear disaster to then-Emperor Akihito at a garden party, triggering criticism his action could amount to political exploitation of the emperor.

Before entering politics, Yamamoto was an actor who appeared in several hit TV dramas and films including the 2000 dystopian action thriller "Battle Royale." His hobby is surfing. 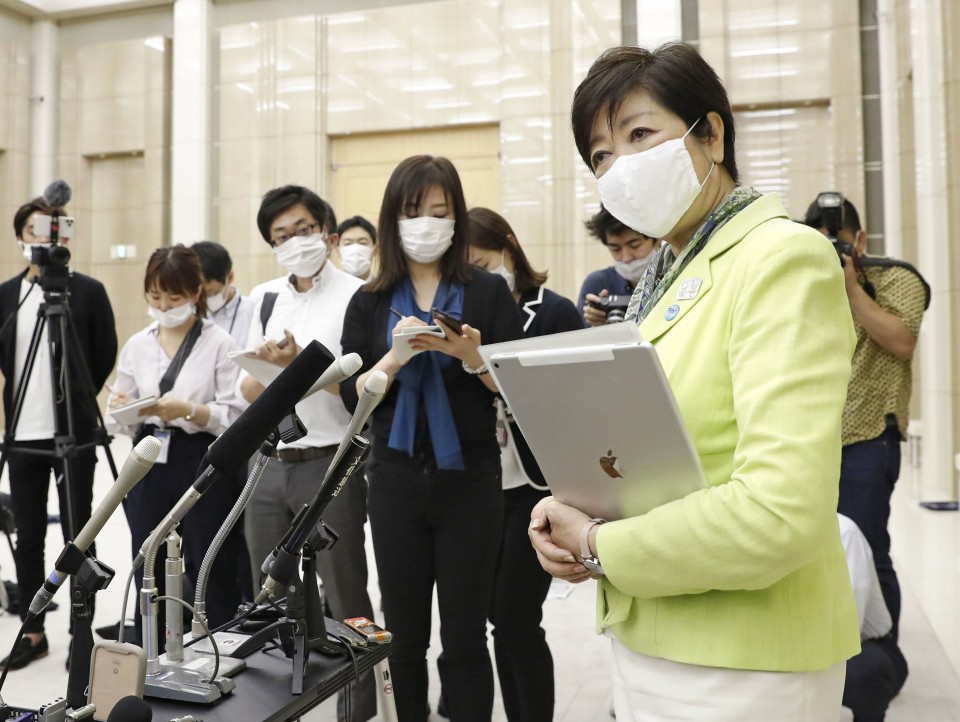 Tokyo Gov. Yuriko Koike, who is widely expected to win a second term in the capital's gubernatorial election on July 5, became the first woman to assume the post after a landslide victory four years ago without the backing of the ruling Liberal Democratic Party.

The 67-year-old Hyogo Prefecture native, a former TV newscaster, graduated from Cairo University in 1976 and is known as an expert on the Middle East.

Koike was first elected to the upper house in 1992 for the now-defunct Japan New Party and won a seat in the lower house the following year.

After joining the LDP in 2002, she was appointed to her first Cabinet post as environment minister under then Prime Minister Junichiro Koizumi and served briefly as defense minister from 2007 during Prime Minister Shinzo Abe's first stint in power. 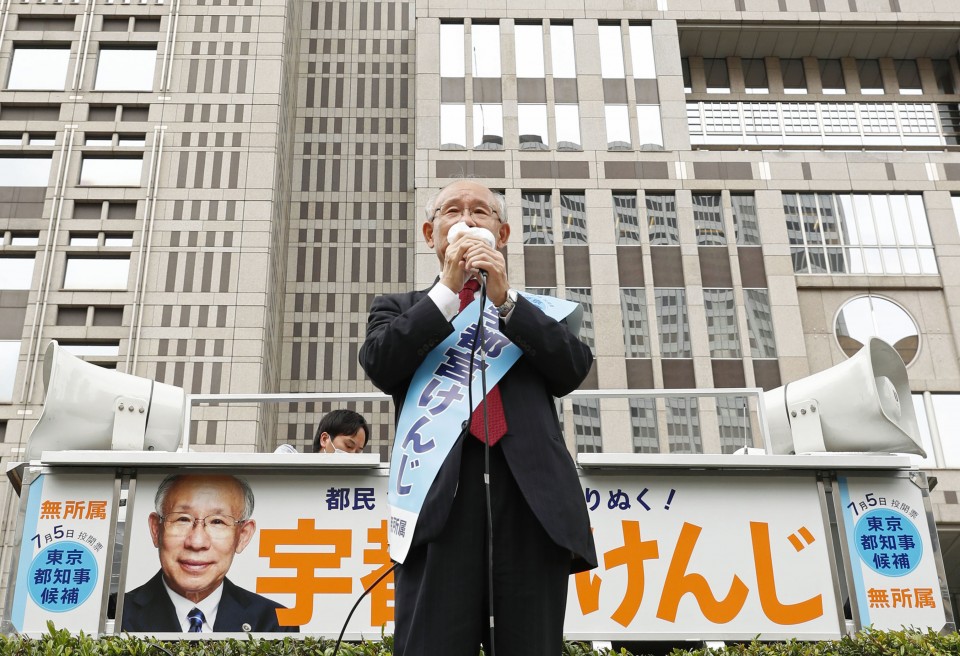 Kenji Utsunomiya, a former head of the Japan Federation of Bar Associations, makes a speech in Tokyo on June 18, 2020, as campaigning officially kicked off for the July 5 Tokyo gubernatorial election. (Kyodo)

Kenji Utsunomiya, a former head of the Japan Federation of Bar Associations, is making his third bid for the Tokyo governorship after placing second in both the 2012 and 2014 races.

The 73-year-old, backed by the Constitutional Democratic Party of Japan and two other opposition parties, pledges to strengthen measures against the coronavirus pandemic by increasing testing and financial support to medical institutions as well as affected businesses.

Utsunomiya believes the metropolitan government's virus response was delayed by a late decision to postpone the Tokyo Olympics and Paralympics for one year, and has called for the games' cancellation if public health experts advise against hosting them in order to divert funds to those affected by the virus.

After a career in law that included representing people subjected to loan-shark intimidation, he became president of the bar associations federation in 2010. He entered the Tokyo gubernatorial race in 2012 and 2014, coming behind Naoki Inose and Yoichi Masuzoe, respectively. 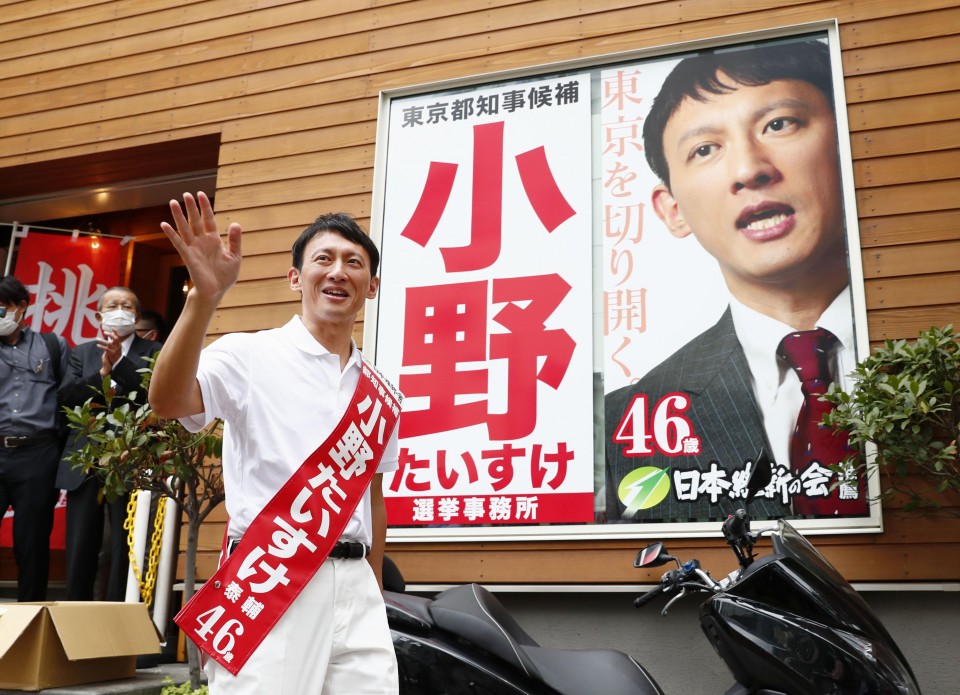 Taisuke Ono, former vice governor of Kumamoto Prefecture, waves in front of his campaign office in Tokyo on June 18, 2020. Campaigning officially kicked off the same day for the July 5 Tokyo gubernatorial election. (Kyodo)

Taisuke Ono, who was the youngest vice governor in Japan when he took on the role in Kumamoto Prefecture in 2012, is pledging a quick recovery of the coronavirus-hit economy in Tokyo in his bid to win the capital's gubernatorial election next month.

Backed by the opposition Japan Innovation Party, Ono, 46, is promising support for businesses hit by the novel coronavirus pandemic, criticizing incumbent Gov. Yuriko Koike's road map for reopening the capital as too slow.

A Tokyo native and a graduate of the University of Tokyo, Ono worked at a consulting firm and as a secretary to Masayuki Fujishima, who served as a House of Representatives member between 2000 and 2003.

In 2008, Ono became a policy adviser to Kumamoto Gov. Ikuo Kabashima who taught Ono when he was a political science professor at the University of Tokyo. At age 38, Ono was promoted to vice governor of the southwestern prefecture in 2012, a post he left last week. 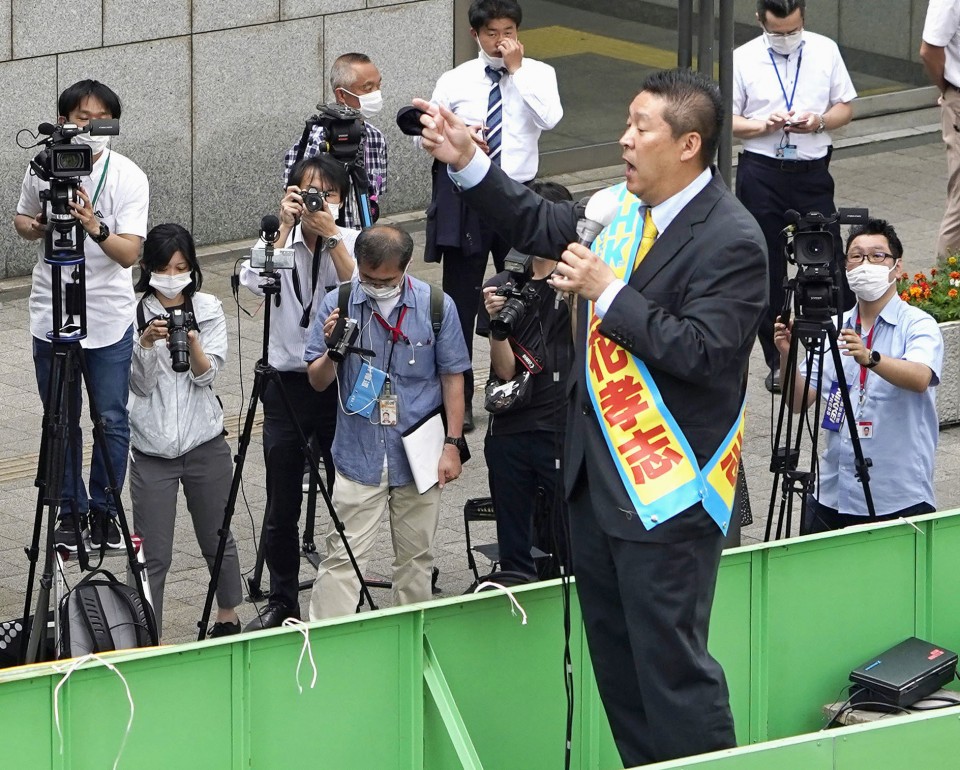 Takashi Tachibana, who heads a single-issue party that vows to "crush" Japan's public broadcaster commonly known as NHK, makes a speech in Tokyo on June 18, 2020, as campaigning officially kicked off for the July 5 Tokyo gubernatorial election. (Kyodo)

Takashi Tachibana, 52, is a former upper house member who heads NHK Kara Kokumin Wo Mamoru To (the party to protect the people from Japan Broadcasting Corp.), a single-issue party that vows to "crush" Japan's public broadcaster commonly known as NHK.

Tachibana won a seat in last year's House of Councillors election but relinquished his Diet seat for a failed attempt to win an upper house by-election in Saitama Prefecture held a few months later.

The party calls for the abolishment of mandatory payment of subscription fees to the public broadcaster, Tachibana's former employer, arguing that only those who watch the network should have to pay.

He was indicted in April on charges of disturbing NHK's business by illegally sharing the personal information of some subscribers online as well as intimidating a member of a local assembly in Tokyo. His trial has yet to begin.