Campaigning for the Tokyo gubernatorial election officially kicked off Thursday with incumbent Gov. Yuriko Koike facing a record 21 challengers, as they focus on the ongoing coronavirus crisis and the metropolitan government's response to it.

In the July 5 election, the candidates will also highlight the postponement and future of the Tokyo Olympic and Paralympic Games, which had to be rescheduled to the summer of 2021 due to the pandemic.

Including Koike, a total of 22 people -- the most for any Tokyo gubernatorial election to date -- have filed their candidacies with the capital's election board. 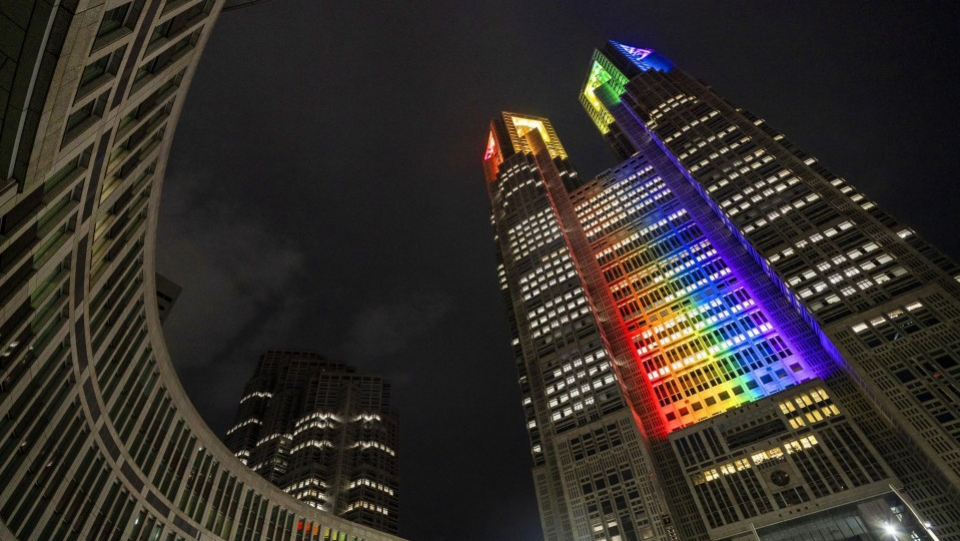 The Tokyo metropolitan government building is lit up in a seven-color scale on June 11, 2020, after Tokyo lifted its warning about a possible rise in coronavirus cases. (Kyodo)

The candidates are expected to largely campaign online in order to avoid drawing crowds of people together, a concern during the ongoing coronavirus pandemic.

Koike, 67, who became the first female Tokyo governor in 2016, is running for re-election as an independent candidate without the support of any party.

"We are working to provide a thorough health care and testing system in the event of a second wave of virus infections," she said in a two-minute video posted online after filing her candidacy.

She vowed to step up support for the virus-hit economy and said, "I will continue to fight to protect the future of Tokyo residents."

Seeking to keep leading the capital's response to the coronavirus, she has proposed developing a Tokyo equivalent of the Centers for Disease Control and Prevention, the U.S. national public health institute, to prepare for a possible second wave of virus infections.

The total number of people who have tested positive for the coronavirus since the start of the outbreak in Tokyo stood at 5,674 as of Thursday, the highest among Japan's 47 prefectures.

The number of new cases in the capital, which reported 41 on Thursday, has seen an increase since a nationwide state of emergency was fully lifted on May 25, easing restrictions on social and business activities. 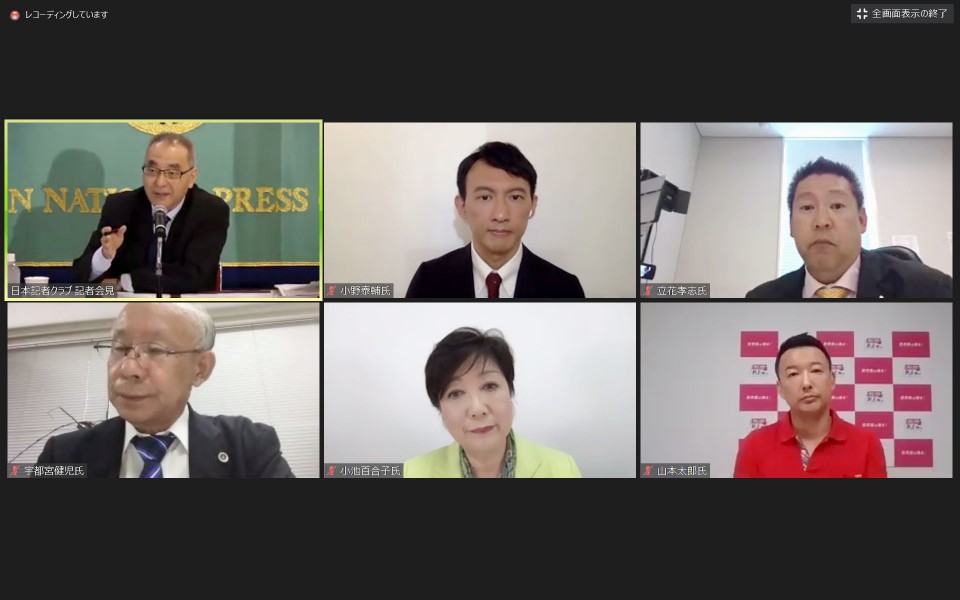 A graduate of Cairo University, Koike has also expressed support for female empowerment and measures to reduce the number of children placed on waiting lists for Tokyo day-care centers, among other policies.

Her challengers include Kenji Utsunomiya, 73, a prominent lawyer and former head of the Japan Federation of Bar Associations, and Taro Yamamoto, 45, a former actor and leader of the anti-establishment party Reiwa Shinsengumi.

Utsunomiya is making his third run for Tokyo governor after placing second in 2012 and 2014. He is backed by the main opposition Constitutional Democratic Party of Japan, as well as the Social Democratic Party and the Japanese Communist Party.

"The focus of this election is on Tokyoites' right to live their lives," the lawyer said in reference to the capital's response to the virus outbreak when giving his first speech after filing his candidacy outside the metropolitan government building.

He has called for the cancellation of the Tokyo Olympic and Paralympic Games if public health experts advise against hosting them in order to divert funds to those affected by the virus.

To avoid overcrowding, he does not plan to release prior information on the time and location of his public campaign speeches.

Yamamoto, who actively promotes policies to support socially vulnerable people, served his first term as a member of the House of Councillors from the Tokyo constituency between 2013 and 2019.

"As an emergency measure, I will deliver a 100,000 yen ($940) handout to all Tokyo residents to cover damage inflicted by the coronavirus," Yamamoto said near Shinjuku Station after filing his candidacy, promising the extra assistance on top of that already offered by the central government.

As for the Tokyo Games, they "are nothing but festivities for businesses that can just be canceled," he said. "We won't be able to host the games while there is no medicine or vaccine for the virus."

Yamamoto, who is also not releasing details in advance about the location of his public speeches, refrained from shaking hands with his audience on Thursday. His campaign staff members wore protective masks and face shields, as well as disposable gloves.

Other challengers include Taisuke Ono, 46, former vice governor of Kumamoto Prefecture who is backed by the opposition Japan Innovation Party, and Takashi Tachibana, 52, who heads the single-issue party known as NHK Kara Kokumin Wo Mamoru To (the party to protect the people from Japan Broadcasting Corp.).

"We need to change this democracy that grants victory to those who just have a catchy slogan," said Ono during a speech in Shinjuku's Kabukicho nightlife district, which has been affected by a recent rise in virus cases among its establishments.

Tachibana gave a speech near the metropolitan government building after filing his candidacy and pledged to "protect the people involved in eateries and event planning."

With the previous two Tokyo gubernatorial elections in 2014 and 2016 called due to the resignation of the governor during their first term, Koike is the first incumbent governor to run for re-election since Shintaro Ishihara in 2011.

The number of eligible voters in the capital stood at about 11.47 million as of Wednesday, up some 193,500 from the previous gubernatorial election in 2016. 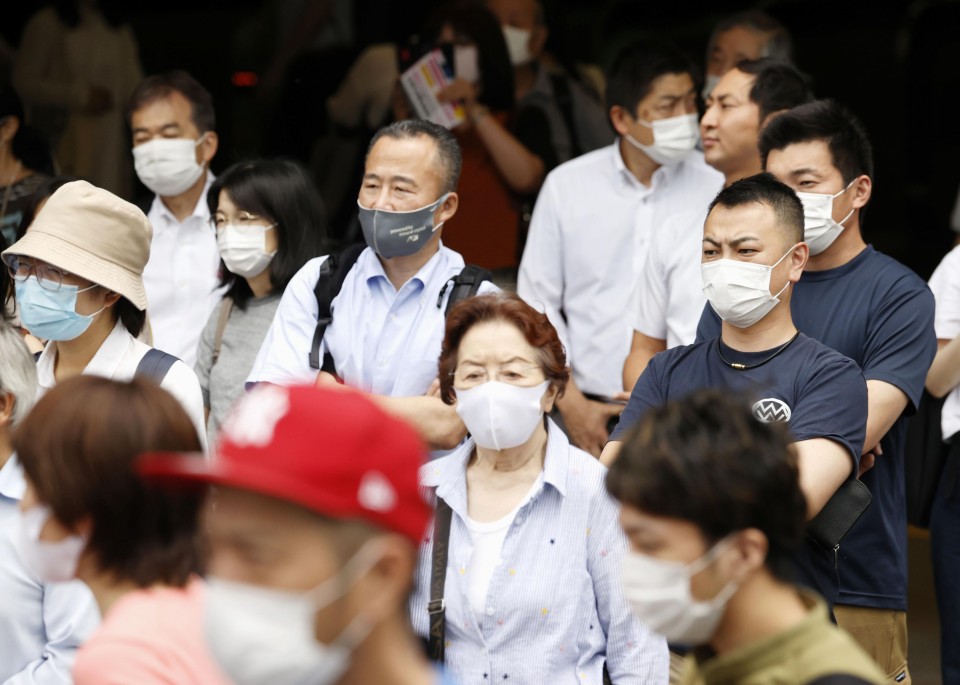 Voters listen to a speech by a candidate in Tokyo on June 18, 2020, as campaigning officially kicked off for the July 5 Tokyo gubernatorial election. (Kyodo)