China tightened security in Beijing and Wuhan, the original epicenter of the new coronavirus outbreak, on Thursday, the 31st anniversary of the crackdown on the Tiananmen Square democracy protests.

With roads near the political center of the capital being blocked, uniformed police officers kept a close watch in and around the square, aiming to contain any potential commemorative demonstrations.

Foreign journalists were not allowed to get close to the square by security authorities, which claimed that they were taking measures to prevent infections with the pneumonia-causing virus.

In the central Chinese city of Wuhan, meanwhile, fears are lingering that large-scale protests may break out, as residents unhappy with unprecedented restrictions on their movements could vent their pent-up frustrations.

To maintain its firm one-party rule, the Chinese Communist Party has justified the 1989 killing of hundreds of protesters and bystanders by declaring it was necessary to quell political unrest. Open discussion about the incident remains taboo in China. 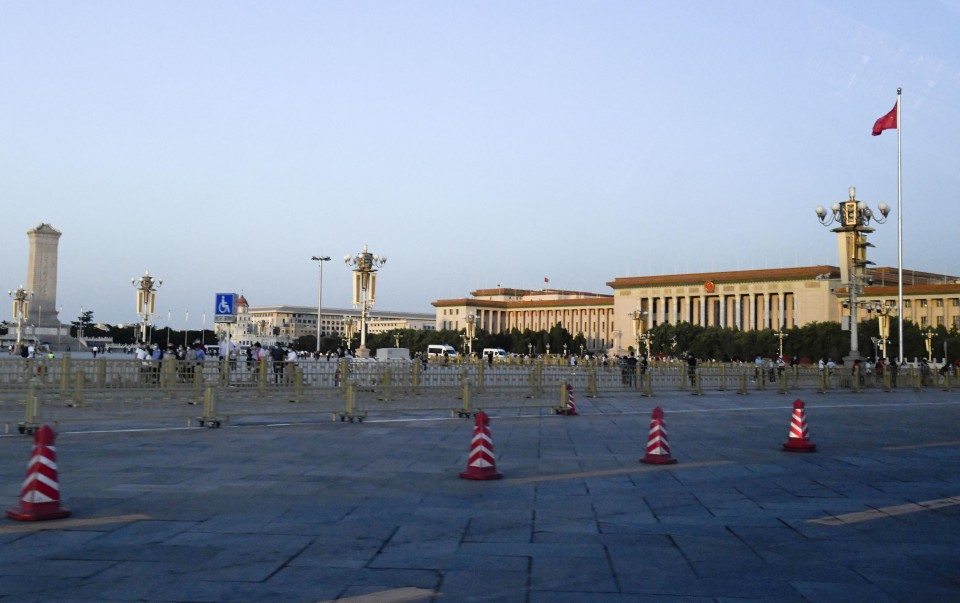 Photo shows Tiananmen Square in Beijing on June 4, 2020, the 31st anniversary of the bloody 1989 military crackdown by the Chinese leadership to quell student-led pro-democracy protests in and around the square. (Kyodo)

"The development path that China has chosen is completely correct," Foreign Ministry spokesman Zhao Lijian told reporters on Wednesday. "We will unswervingly follow the path of Chinese socialism and the path of socialism with Chinese characteristics."

China, however, has stayed on high alert, as some other major countries have accused it of trying to erode freedoms and human rights in Hong Kong by enacting a national security law for the territory to clamp down on what Beijing views as subversive activity.

Concern over President Xi Jinping's leadership has been growing in the international community, given its alleged initial attempt to conceal crucial information about the virus spread and hardline response to pro-democracy protests in Hong Kong, pundits say.

In the wake of the 1989 death of Hu Yaobang, sacked as general secretary of the Communist Party two years earlier for his liberal leanings, students rallied to call for democracy and government action on rampant corruption. Support for the protest grew as people poured into Tiananmen Square.

The protest defied martial law, declared in late May, and inspired big rallies across China. But from late June 3 into June 4, troops and armored vehicles cleared the square by force, killing protesters and bystanders.

U.S. Secretary of State Mike Pompeo has met with four former student leaders of China's pro-democracy movement who were present in Tiananmen Square in 1989, his department said Wednesday, in a rare move that is likely to irritate Beijing.

The U.S. State Department said in a statement released on the same day, "The total number of missing or dead Tiananmen protesters is still unknown...We reiterate our call for a full, public accounting of those killed or missing."

In China, the increase in infections peaked in late February. The virus, which causes the respiratory disease COVID-19, has sickened over 83,000 people in the mainland and killed more than 4,600, the nation's health authorities said.

The 76-day lockdown in Wuhan, a business and transportation hub with a population of around 11 million, was lifted on April 8.