FOCUS: Race for Tokyo governor is Koike's to lose

Tokyo Gov. Yuriko Koike is riding a wave of popularity thanks to her efforts to bring the coronavirus under control, putting her on course to win re-election when voters cast their ballots on July 5.

In late March, when the central government was still hesitating about declaring a state of emergency due to fears it could tank the economy, Koike issued a call for Tokyoites to stay at home on weekends and avoid nightclubs and hostess bars, where clusters of infections had popped up.

Making frequent appearances in televised and livestreamed press conferences, she popularized the "3 C's" -- confined spaces, crowded places and close contact -- to describe situations carrying a high risk of infection that should be avoided. 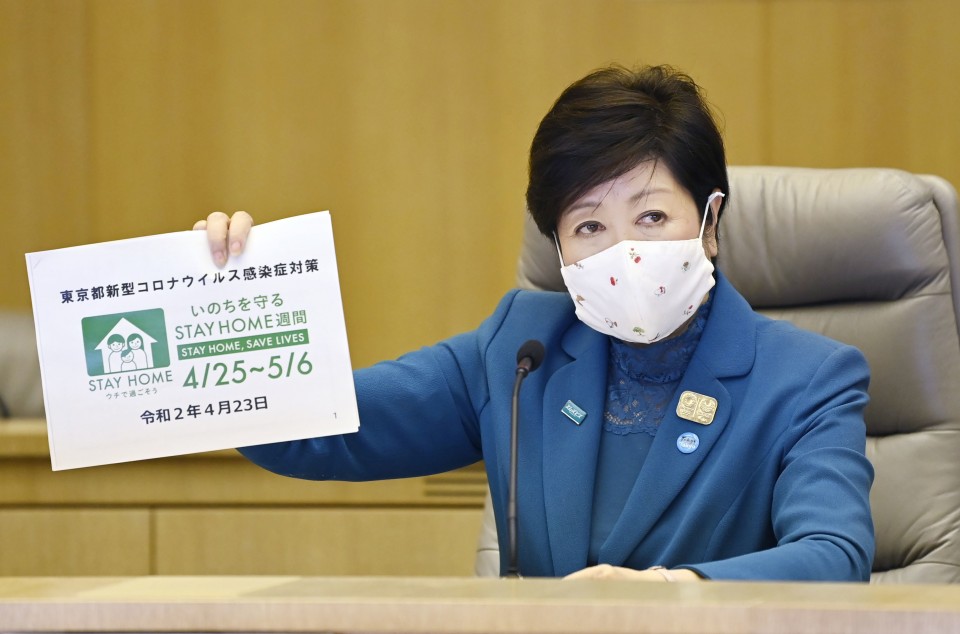 Tokyo Gov. Yuriko Koike speaks at a meeting of the metropolitan government's task force on arresting the spread of the new coronavirus in Tokyo on April 23, 2020. (Kyodo)

When the state of emergency was eventually declared, Koike called for more social distancing and asked some businesses to temporarily close. Tokyoites heeded the call. New infections in Tokyo peaked at around 200 per day in mid-April and have since fallen to a dozen or so daily. That is impressive for a city of 14 million, one of the largest metropolises in the world.

While some have accused Koike of "style over substance," she has succeeded in cultivating an image as a strong leader particularly in contrast to Prime Minister Shinzo Abe, who has stumbled in his plans to distribute face masks and cash handouts across Japan.

Koike, 67, faces sparse opposition in the election, with Japan's ruling Liberal Democratic Party opting not to field a challenger. Her main rivals are Kenji Utsunomiya, the former head of the Japan Federation of Bar Associations, and Taisuke Ono, until recently the vice governor of Kumamoto Prefecture.

Utsunomiya, 73, is popular among the capital's more liberal voters and backed by the Constitutional Democratic Party of Japan, the Japanese Communist Party and the Social Democratic Party. But he finished a distant second in both of his two previous attempts and will need to gain wider support to win this time. 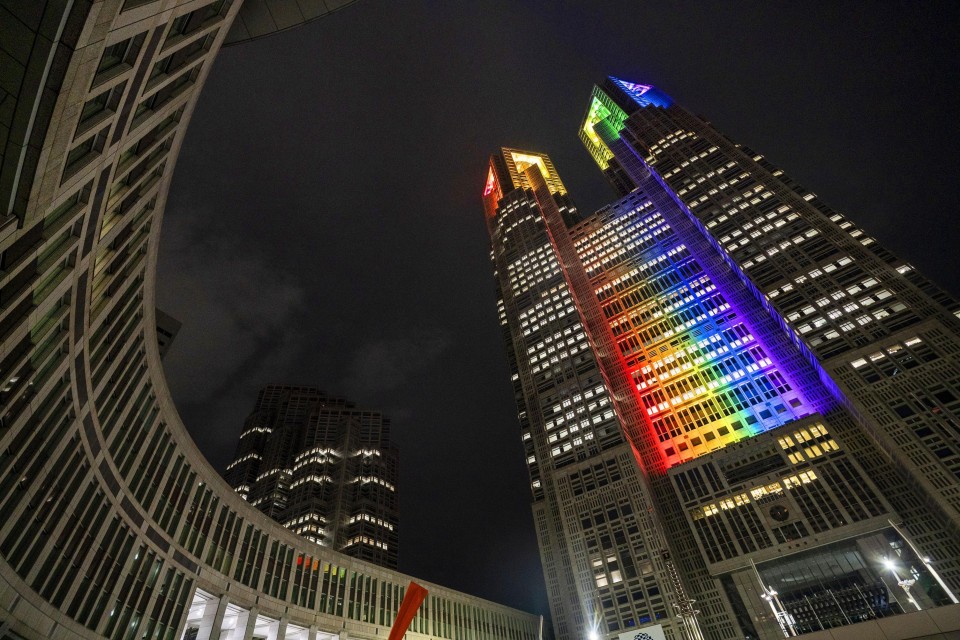 The Tokyo metropolitan government building is lit up in a seven-color scale on June 11, 2020, after Tokyo lifted its warning about a possible rise in coronavirus cases. (Kyodo)

While he has yet to announce his policy platform, in the past Utsunomiya has called for the creation of more day-care centers and nursery schools, free medical care for people over 75 and the elimination of nuclear power in favor of renewable energy.

Taro Yamamoto, an actor-turned-politician who leads the anti-establishment party Reiwa Shinsengumi, has also said he is considering entering the race.

Ono, 46, is pushing for a quick economic recovery and has criticized Koike's road map for reopening as too slow. He has vowed to negotiate for the Summer Olympics to be moved to 2024 to allow for the coronavirus pandemic to fully subside. Ono is backed by the Japan Innovation Party.

Other candidates include Takashi Tachibana, head of a fringe party calling for public broadcaster NHK to be dismantled.

She made her political debut in 1992, winning a seat in the House of Councillors under the now-defunct Japan New Party, which became part of a coalition government that ended the LDP's 38-year reign. 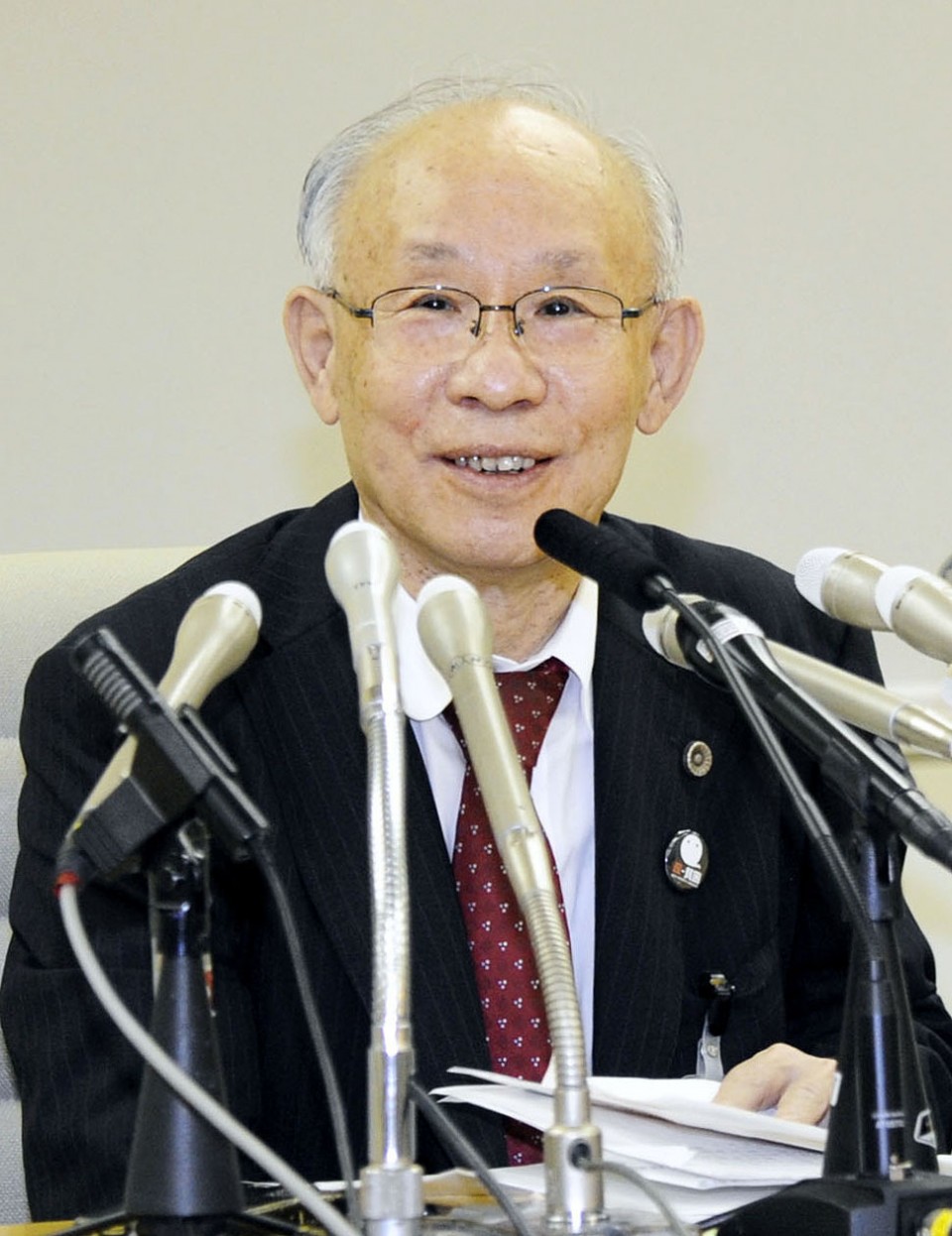 Kenji Utsunomiya, a former head of the Japan Federation of Bar Associations, holds a press conference in Tokyo on May 27, 2020, about his candidacy for the Tokyo gubernatorial election to be held on July 5. (Kyodo)

After some political shuffling, Koike joined the LDP in 2002 and was appointed to her first Cabinet post as environment minister under then Prime Minister Junichiro Koizumi. She promoted "Cool Biz," encouraging office workers to ditch their jackets and ties during the summer to cut down on carbon emissions from air conditioning. She served as defense minister from 2007 during Abe's first stint in power.

In 2016, Koike ran for Tokyo governor after her predecessor, Yoichi Masuzoe, resigned for misusing taxpayers' money. She won convincingly with 44.49 percent of the vote despite not having LDP support, with the subsequent tidal wave of support for her Tomin First no Kai (Tokyoites First party) at one point making her a contender to become Japan's first female prime minister.

Koike has meanwhile been dogged by allegations that she lied about graduating from Cairo University in Egypt and faked her diploma.

But this month the school issued a statement saying she did graduate in 1976, following a report in the Shukan Bunshun weekly magazine quoting a woman who says she was Koike's former roommate.

Whoever wins the election will have to tackle the complicated process of preparing for the Summer Games, which organizers and the International Olympic Committee have agreed should be simplified to lower the risk of spreading the coronavirus.

That could include reducing the number of spectators and scaling back the opening and closing ceremonies, sources with knowledge of the matter have said.

And it remains unclear exactly how much postponing the Olympics will cost or who will foot the bill. The IOC has said it will put up to $650 million toward holding the games next year, with total expenses expected to be several times that amount.