A group of about 20 restaurants in Yokohama's Chinatown started a drive-through service Wednesday as part of efforts to retain customers amid the novel coronavirus pandemic.

Customers who order by telephone in advance can pick up hot meals from the restaurants at a nearby parking complex, according to the Yokohama Chinatown Development Association, to which some 400 restaurants and shops belong.

Nobumasa Takahashi, chairman of the association, does not expect customer traffic to Yokohama's Chinatown, the largest in Japan, to return to levels prior to the pandemic in the coming year.

"We have to try a new way of doing business as we brace for a post-coronavirus society," said Takahashi, 61.

Even during the Golden Week holidays earlier this month many businesses were shuttered in the district, one of the three major Chinatowns in Japan together with those in Kobe and Nagasaki.

On May 4, Ye Yunxia, who works at Chinese restaurant Mankinro, said, "Our business has dried up, although now is the period when customers come the most."

Ye said the 300-seat restaurant is normally filled with customers during the annual holidays, but it closed earlier than usual this year and asked all its over 10 part-timers to have days off.

"There are no people on the street in the first place," Ye said.

The number of visitors to Chinatown started to decrease in January when Japan's first case of COVID-19 was confirmed, with a false rumor circulating that the patient was from the area.

In March, a number of restaurants in the popular tourism destination received hate mail blaming Chinese people for spreading the pneumonia-causing virus and telling them to "get out of Japan soon."

In the wake of the incidents, Kaiinkaku, one of the restaurants targeted, temporarily drew crowds of customers who wanted to show their support and encourage its staff.

Still, the number of visitors to the area in March dropped to around a tenth of its normal business.

Around 80 percent of the association's member businesses have remained closed since April. Prime Minister Shinzo Abe declared an initial state of emergency until May 6 covering seven prefectures with relatively high numbers of infections, including Tokyo, Osaka and Kanagawa, of which Yokohama is the capital. 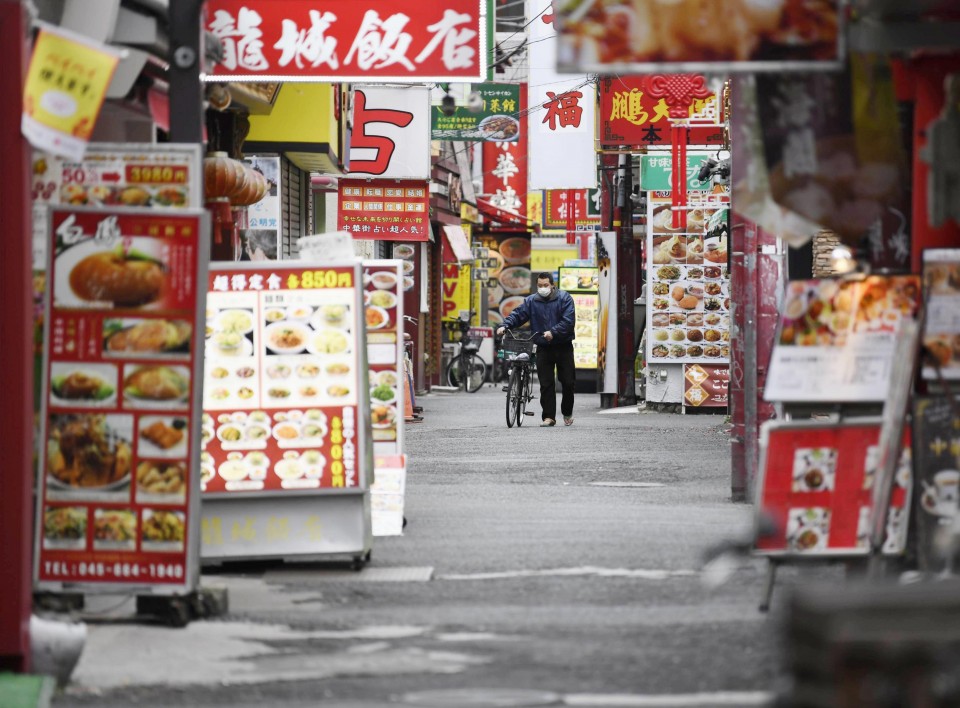 (Yokohama's Chinatown is deserted amid coronavirus fears on April 5, 2020)

The declaration, requesting people to stay at home as much as possible, was widened to all 47 prefectures in mid-April.

It was later extended until May 31 and four member restaurants have decided to discontinue business, weighed down by labor costs and rent.

In an attempt to overcome the hardship, the association came up with the joint drive-through service to reduce human-to-human contact and help reassure customers.

Takeshi Tsuruoka, president of Cantonese restaurant Kitcho, which has logged a monthly deficit of more than 1.5 million yen ($1,400) in recent months, expressed hope for the new style of business,

"As we want to increase sales by any means possible, I appreciate the new service, as it is not like delivery that requires additional work," he said.