Prime Minister Shinzo Abe pledged Friday to deliver 100,000 yen ($933) in cash to all citizens in Japan "as soon as possible" as his declaration of a nationwide state of emergency will curb people's freedoms amid the new coronavirus outbreak.

Reducing human-to-human contact by as much as 80 percent holds the key to preventing an explosive surge in coronavirus infections, Abe said as he asked people in the country's 47 prefectures to refrain from unnecessary outings to help reduce the strain on hospitals and medical staff.

"Please do refrain from going out. Please reduce your contact with others as much as possible. Doing so will save the health care system and the lives of many people," Abe said during a televised press conference.

"This will lead to the protection of your loved ones. It all depends on your behavior," Abe said, a day after he expanded the state of emergency from Tokyo, Osaka and five other prefectures to the entire nation.

The expansion came with a sudden policy shift on Abe's part at the urging of coalition partner Komeito. He dropped the initial plan to provide cash handouts only to struggling households hit by falling income, deciding instead to give 100,000 yen to each citizen. 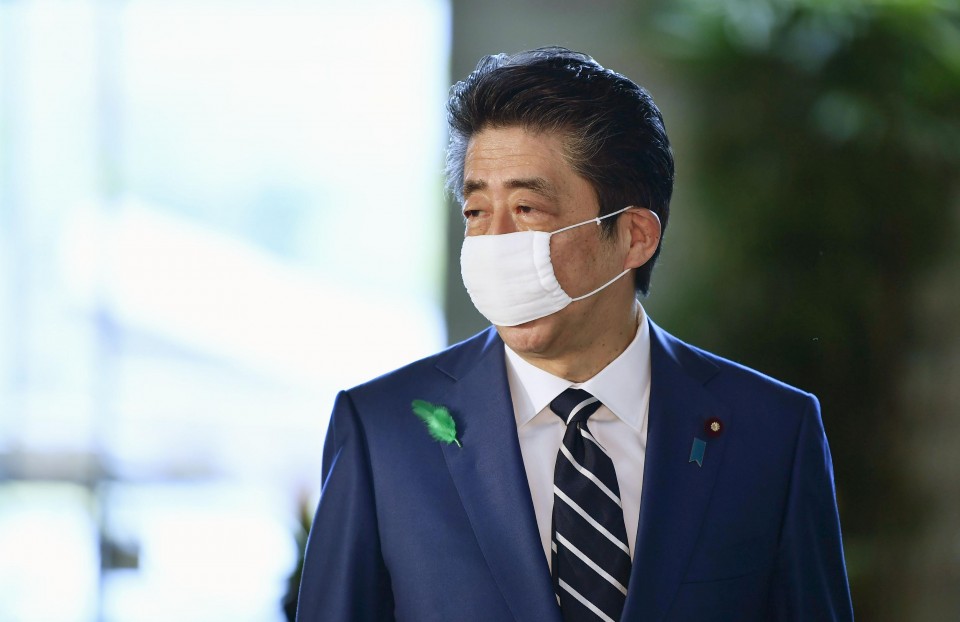 The change will require a rare reworking of a supplementary budget for fiscal 2020 from April that was scheduled to be submitted to parliament next week. The necessary funding will increase to 14 trillion yen from 6 trillion yen for the new cash handout scheme, according to Abe.

"I apologize from the bottom of my heart to the people of Japan for causing confusion," the prime minister said, adding that the policy shift should have been made earlier.

The government launched a similar cash handout program in 2009 at the time of the global financial crisis following the collapse of Lehman Brothers Holdings Inc., though the scale was much smaller.

Abe had been skeptical about such a blanket scheme as many ended up saving rather than spending the money to rejuvenate the economy.

As the government works out the details of the envisaged program, it will adopt simplified procedures for receiving the money, Abe said, adding, "Speed matters."

After reworking the extra budget, the government is expected to have a revised version approved by the Cabinet on April 20 and submitted to parliament around April 27.

Nongovernmental organization Solidarity Network with Migrants Japan on Friday asked the government to make sure that all of the more than three million foreign nationals living in the country receive the cash handouts as they did under the 2009 program.

The expansion of the state of emergency, which will not involve hard lockdowns in Japan, came ahead of the Golden Week holidays from late April to May 6.

The decision is intended to reduce travel from urban to rural areas and prevent the spread of the virus, Abe said, while dismissing the idea of requesting train and flight operators to reduce services.

"Reduced services will instead lead to congestion," the prime minister said.

Japan has so far confirmed over 10,000 coronavirus cases, with about 700 from the Diamond Princess, a cruise ship operated by a U.S. company that was quarantined near Tokyo in the early stages of the epidemic in Japan. The acceleration of infections in Tokyo and other cities prompted Abe to declare an emergency on April 7 for the seven prefectures.

Speaking at the nearly hourlong press conference, Abe said whether he will be able to lift the emergency declaration at the end of the holidays in early May will hinge on the opinion of an advisory panel of medical experts, not a political decision.