When Japan won the bid to host the 2020 Summer Games in 2013, retired top fencer Kenichi Chida was determined to find some role to play, having been one of the "phantom athletes" who never made it to the boycotted 1980 games in Moscow.

Born in the northeastern coastal city of Kesennuma, where more than 1,100 people perished in the March 2011 earthquake and tsunami, Chida was penciled in to bear the Olympic torch in his hometown as one of 65 runners to tour Miyagi Prefecture in June, ending what would have been a 40-year wait for an "Olympics appearance."

But four days after the sacred flame landed in the prefecture from Greece, the raging coronavirus pandemic forced postponement of the games until 2021. The nationwide relay was also put on hold, but Chida was relieved that the worst-case scenario -- cancelation of the games altogether -- was averted.

"I've been informed by the prefectural government that we (the runners who were originally chosen) will be prioritized when choosing the new ones. I'm relieved," Chida said.

The former high school teacher, currently director of a local sports hall, says he had hoped during the relay to "give athletes pats on the back" and "show the world our region's recovery."

His uncle, cousin and two former students were among the nearly 16,000 people whose lives were claimed by the calamity, including the female captain of his former high school fencing team, which won all three national titles in 2005.

He has groomed two local fencing stars to Olympic success, including his own son Kenta, during his 36-year coaching career. They both appeared in the London Olympics the year after the disaster, with Kenta winning silver in the men's team event to give a big lift to the city, whose population currently stands at over 60,000. 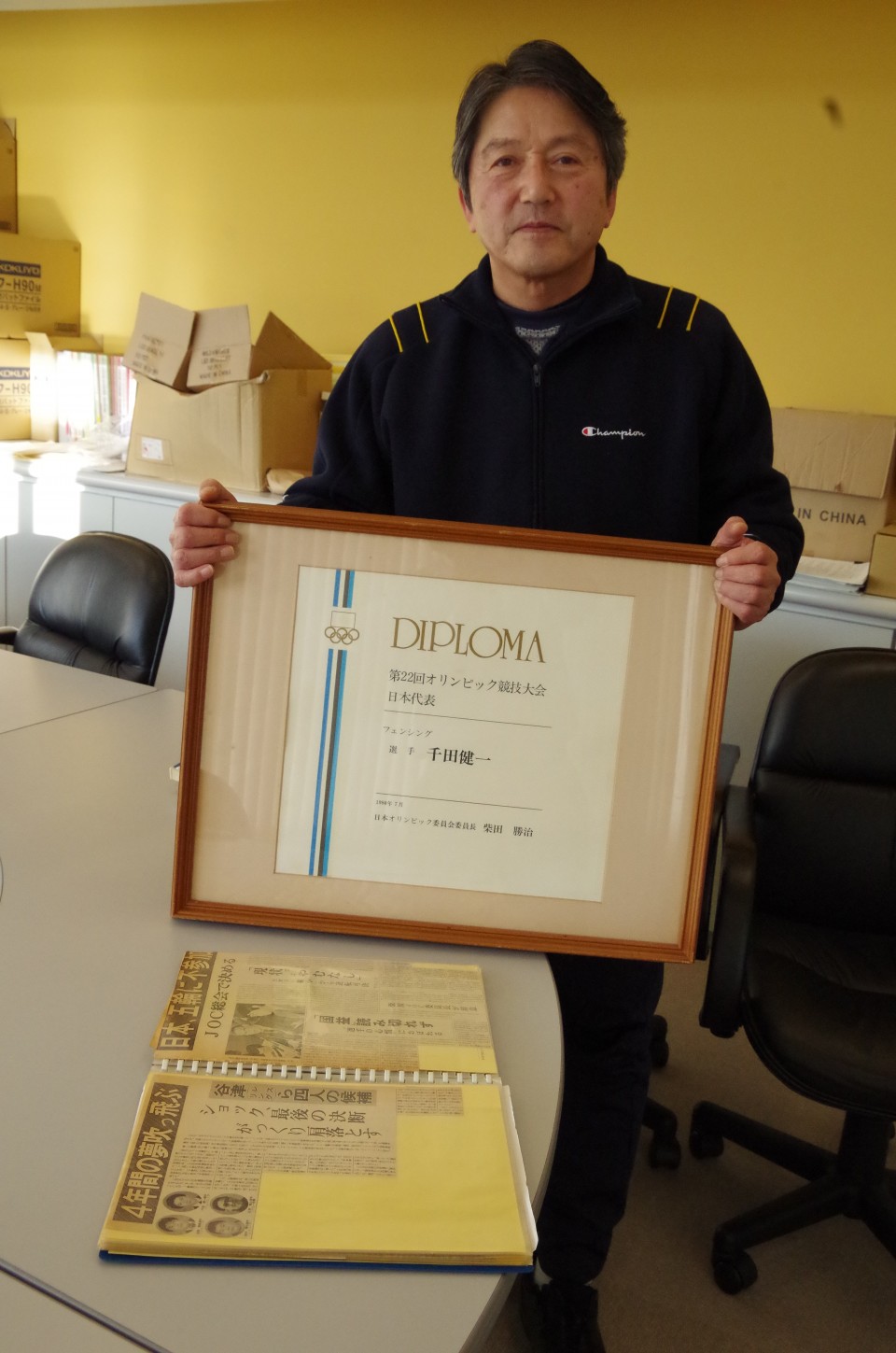 His coaching success reflects a hunger born from his own missed opportunity to appear at the Olympics, dashed two months before the Moscow Games were due to open.

His spot had already been booked for three months. When he came out atop the domestic qualifiers in February that year, neither he, nor his fellow teammates, envisaged they would forever be referred to as "the phantom delegation."

"I remember it was May, the news about boycotting was on all the time and everyone at the training camp had this weird feeling -- anxious whether the games would be held, Japan would participate or boycott," he recalled.

They continued their preparations, remaining hopeful even amidst the Soviet Union's invasion of Afghanistan, but the dreaded news eventually arrived.

"I could see it coming, but it was a huge disappointment. Getting a spot for the games was something we all yearned for, especially for those who had made it for the first time like myself," he said.

"I remember vividly the Japanese team in the 1964 Tokyo Games entering the opening ceremony with their red blazers on. I was in the second grade of elementary school. I wanted to do the same after getting picked for Moscow and I'm gutted to this day that I couldn't."

Forty years on, the coronavirus that was first reported in China has put Tokyo Olympics and Paralympics in jeopardy. But a second cancelation of an Olympics for Tokyo after it lost the games in 1940 when the world was plunged into war has been ruled out for now, leaving Chida hopeful of fulfilling his dream after a 41-year wait.

Chida knows, however, that his own worries about participation are small in comparison to the concerns confronting athletes -- being more aware than most how decisions on participating in the games can define their careers. 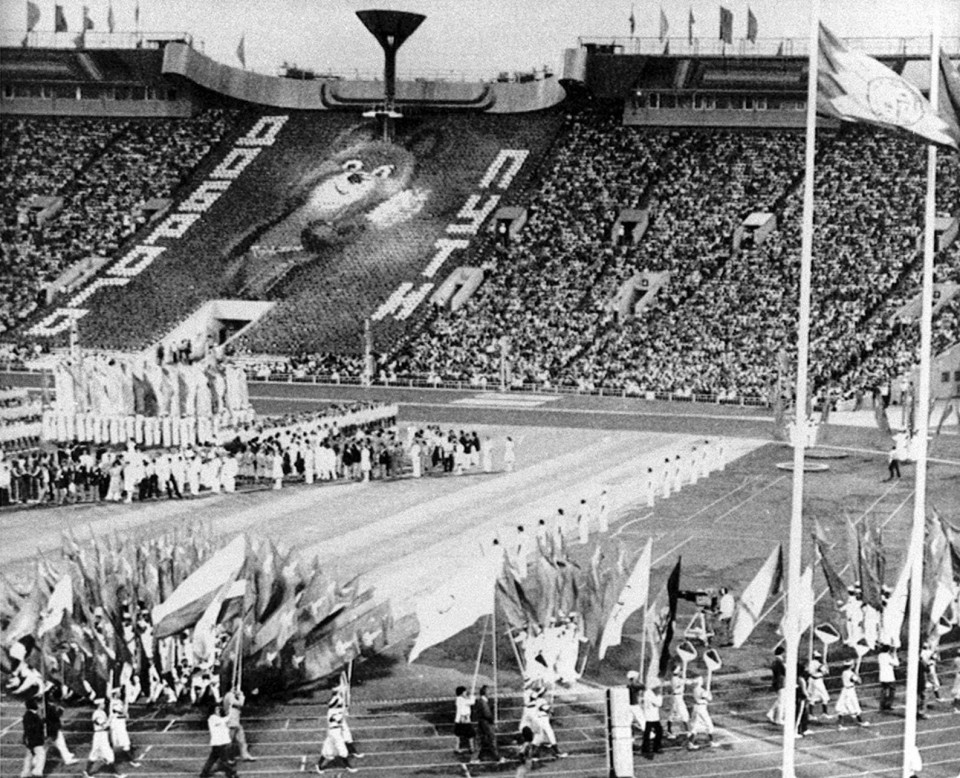 (File photo shows the closing ceremony of the Moscow Olympics.)

"Olympics are valuable because there's that wait of four years. It is one that your whole competitive career hinges on," he said. "I was 23, so I could have aimed for the next one in Los Angeles, but there were those who were reaching their 30s and they said their competitive careers were over. We couldn't hide the shock as teammates."

"If it's a one-year delay then that's still manageable, but say an athlete is at the age of 28 and the next opportunity is at 32, your career would be on the wane."

The sense of loss lingered for Chida following the Moscow boycott, but he eventually decided to stay true to his long-held commitment to return home as the oldest son in his family, taking a local teaching job rather than remaining a teacher in Tochigi -- much closer to Tokyo where he could have continued to train at the elite level.

The summer 1984 was his last chance to take the teacher recruitment exam in Miyagi due to the age limit, a fateful decision that led him to give up on representing Japan in the Olympics that year.

It left him ruing what might have been when he saw a younger fencing colleague he used to beat in competition appear on television at the Los Angeles Games.

"I was the youngest among top fencers before Moscow and would likely have made Los Angeles if I could continue. Instead, I was teaching the very basics to beginners at school when the games were taking place, and I did think this isn't really where I should be. I'd have chosen to carry on fencing had I gone to Moscow."

Qualifications for the Olympics, still to be called the 2020 Tokyo Games, have been postponed globally across sports, leaving selection of over 40 percent of the games' some 11,000 athletes undecided. Those who have already qualified were left wondering whether they would participate at all at one stage, in a similar boat to the one Chida found himself in.

"It was a plus for athletes that it wasn't canceled. To wait another four years would have been cruel, and it's good they can have something to look forward to," he said. "The issue was no longer just about Japan, we've got no clue what will happen to other countries even if we manage to contain (the virus) here."

In 2011, Chida's high school suddenly became an evacuation site for 1,000 people. As vice headmaster at the time, Chida found himself in charge of caring for survivors and bereaved families, struggling with them through the next four months.

"On the first day, I was given 70 rice balls to share with all 1,000 evacuees," he said. "Another day, a father was calling his daughter's name with no reply. He broke down crying in the middle of the schoolyard, saying he had gone to all the other evacuation sites and that this was his last hope. I saw similar scenes countless times."

Chida says he had some misgivings about how Tokyo's pitch for the Olympics used the disaster in Tohoku as a "bargaining chip," with only a few soccer, softball and baseball games to be hosted in the region during what was sold as the "Olympics of recovery."

There was no mention of the region when the marathon was moved to northern Sapporo over summer heat concerns in Tokyo by the IOC last year, a decision that still stands even though the games' postponement offered a chance for a rethink.

"Recovery would have progressed further if resources and manpower hadn't been taken away by the 'Olympics of recovery'," he said. "I do think there are many living in Tohoku who feel left behind."

But he also acknowledges that the arrival of the flame -- temporarily being kept in neighboring Fukushima Prefecture at a site associated with battling the 2011 nuclear disaster -- and the torch relay, when it is finally held, will be a step forward for the region, providing an opportunity to show appreciation to the outside world and also to local communities.

"The disaster was unprecedented and I wondered what would happen to Kesennuma at the time. Now I feel the city has recovered to a degree where it is gradually becoming one that can be handed on to the next generation. The kids here are really pure and we lived sharing so many goals, so I want to share the joy with them when I run."

As one of the athletes deprived of the chance to grace the Olympic stage, Chida hopes today's athletes will take any positives they can from the delay -- and that the games will not slip through his fingers again.

"There's a chance that this one year provides athletes opportunities to evolve in their characters, even if they are in their 30s. There are lots of areas where one can mature in one year," he said. "What they've built toward this summer will remain assets, and I hope they can add on top of those."

"I'd be really luckless to miss both Moscow and this one, but thankfully I will still be able to run. I'm just leaving the fun bit for next year."