Every Sunday morning, a decades-old market in Japan's northeastern prefecture of Miyagi is crowded with local residents and tourists making their way down narrow aisles and checking a variety of fresh seafood.

The bustling market in the Yuriage district in Natori has become part of the small port city's scenery -- but it was once unthinkable. 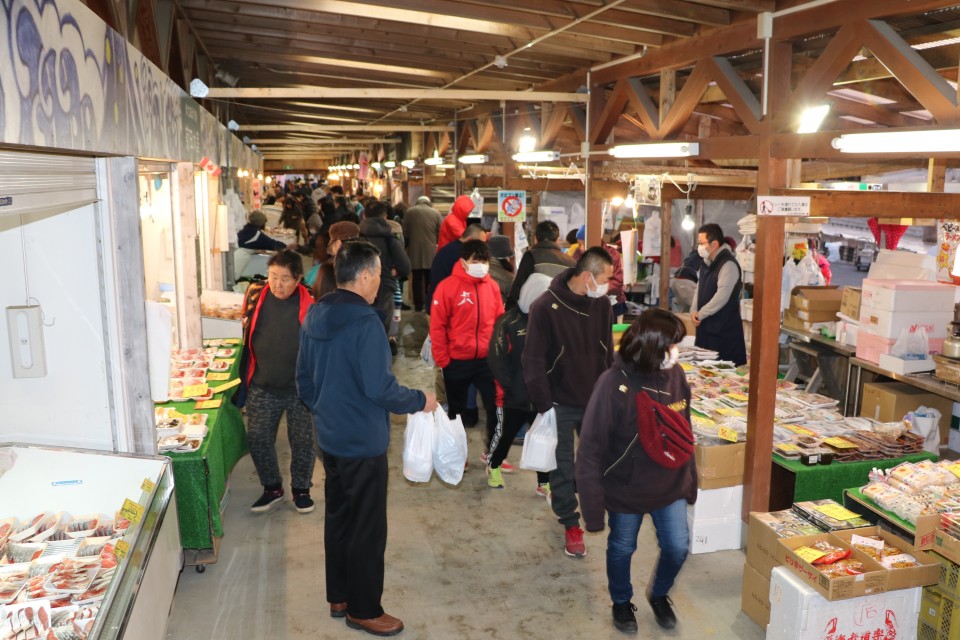 "I had almost given up my business, and didn't believe that we could rebuild our market," said Koichi Sakurai, who runs a seafood retailer at the market, looking back on the days when the city was devastated by the March 11, 2011 earthquake and tsunami.

"So it's incredible for me that we've come so far," said the 65-year-old, who, along with other people in his community, was looking forward to the Olympic torch relay passing through the district in June.

"Both natural disasters and something like the outbreak of the new coronavirus are unpredictable. But we have had experience of recovering from where everything was lost, after having struggled so much in one of the disaster-stricken areas," he said after the International Olympic Committee decided to postpone the Tokyo Summer Games by about one year.

With the delay due to the global coronavirus pandemic, the Japan leg of the torch relay, which had been scheduled to start on March 26, was also put on hold, two days before its kick-off.

"I'm certain it will be a success next year if we show the same kind of spirit we showed following the disaster," he said. 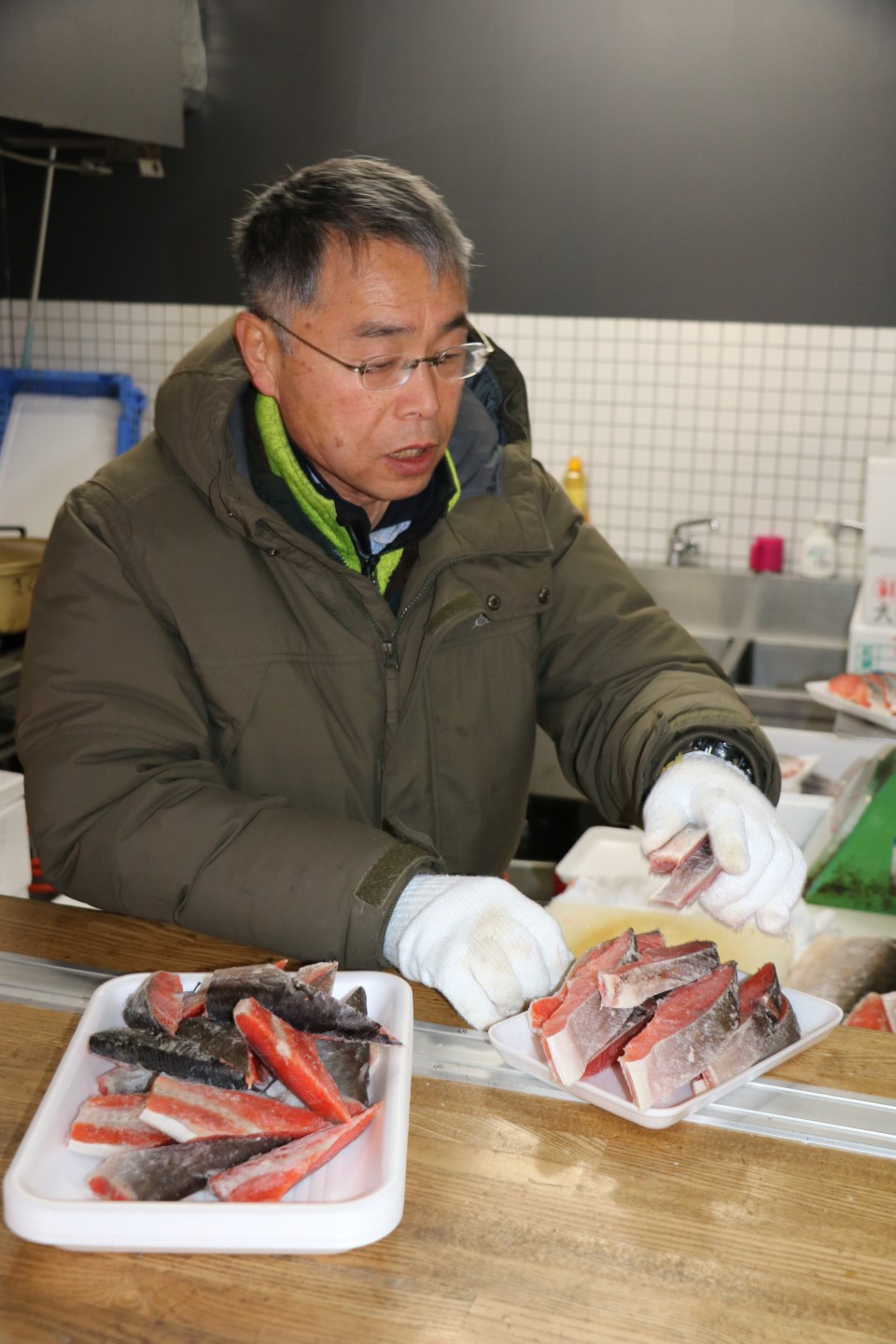 (Koichi Sakurai puts slices of salmon on trays at his shop in Yuriage Port Morning Market on Feb. 23, 2020.)

In the Yuriage district, where more than 700 out of 7,000 residents lost their lives in the quake and tsunami, the reconstruction of stores and houses has been making steady progress and the population has been picking up recently after years of outflow.

Following the decision last year that the route for the Olympic torch relay would go through the district on June 22, local people were hoping the event would be a golden opportunity for them to express their gratitude to the world for helping with the region's reconstruction and prevent the memory of the catastrophe from fading away.

"We are looking at the postponement positively also in the context of our wish to convey our appreciation," said Sakurai.

Located in the eastern part of Natori and facing the Pacific, the district is known for its fishing industry and seafood such as high-quality ark shell.

Following the tsunami, over half of the residents of Yuriage moved to other places including Miyagi's prefectural capital of Sendai, located just 10 kilometers north and which has a population of more than 1 million.

The buildings of the market, which has been held on Sundays for about half a century, were rebuilt two years after the tsunami. About 50 shops stand side by side, though there are some vacant lots outside the market.

Taking over his father's business around 25 years ago, Sakurai has also served as the leader of the market's cooperative union for over 10 years.

Sakurai sells about 150 kg of red salmon every week. "Those who want to eat salmon surely come to my store and buy it, and they never fail to become regular customers," he said.

Four days after the magnitude 9.0 quake and tsunami, however, only the cement foundations of the market's facilities were visible, as was the case with nearly all buildings in the district. 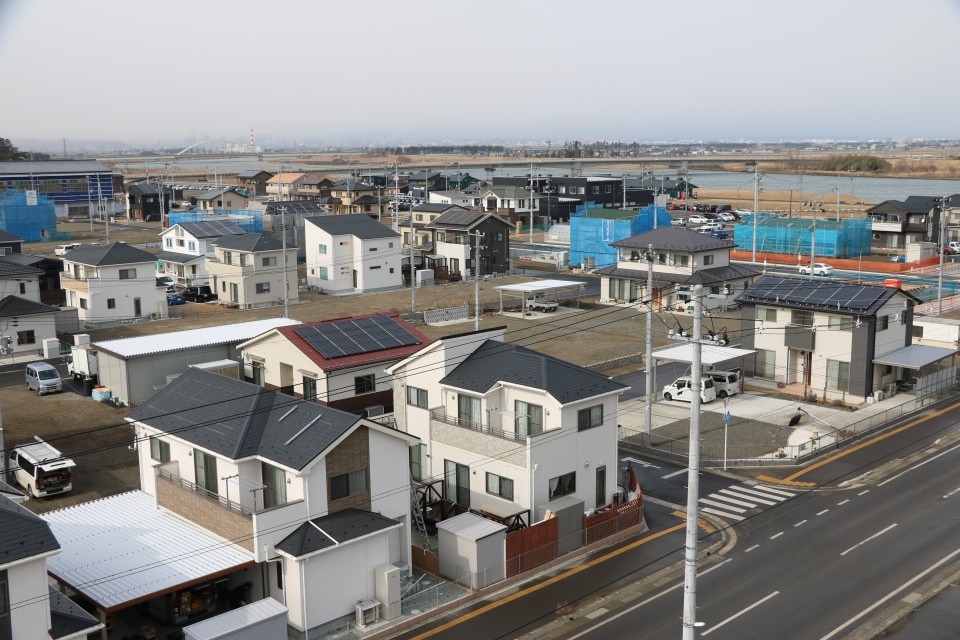 (Photo shows newly-built houses on raised ground after the area was inundated by the March 2011 earthquake-tsunami disaster in Yuriage district in Natori on Feb. 23, 2020.)

Sakurai's family members were luckily all safe, but his home and an adjacent seafood processing plant were swept away by the tsunami.

Of the 48 store operators at that time, four died or went missing, but about 40 were able to assemble a month after the disaster.

"We have nothing to sell any longer, so let's give up our business, let's put an end to everything by allocating the (union's) money to everyone," Sakurai said at the meeting.

About 10 agreed, but the rest of shop owners disagreed, saying they wanted to continue their businesses at the same place.

Their spirit of commitment moved Sakurai, and he decided to work with them in getting the market up and running again, initially selling their products in places such as a parking lot that a shopping center in Natori rented to them for free.

In the fall of 2012 Sakurai heard from the city that a local company had introduced Yuriage to Canada's central and local governments, as well as its private sector, as a possible destination for donations.

Yoichi Sugiura, 61, a director of Sendai-based housing maker Selco Home Inc., explained that at first the Canadian side asked the company what kind of assistance it could offer in the wake of the tsunami, "because we have been handling Canada-made houses and routinely interacting with the Canadian government and firms."

Sugiura said the firm's president had a personal relationship with the then-mayor of Natori, and that they had known that the market was in need of financial support. 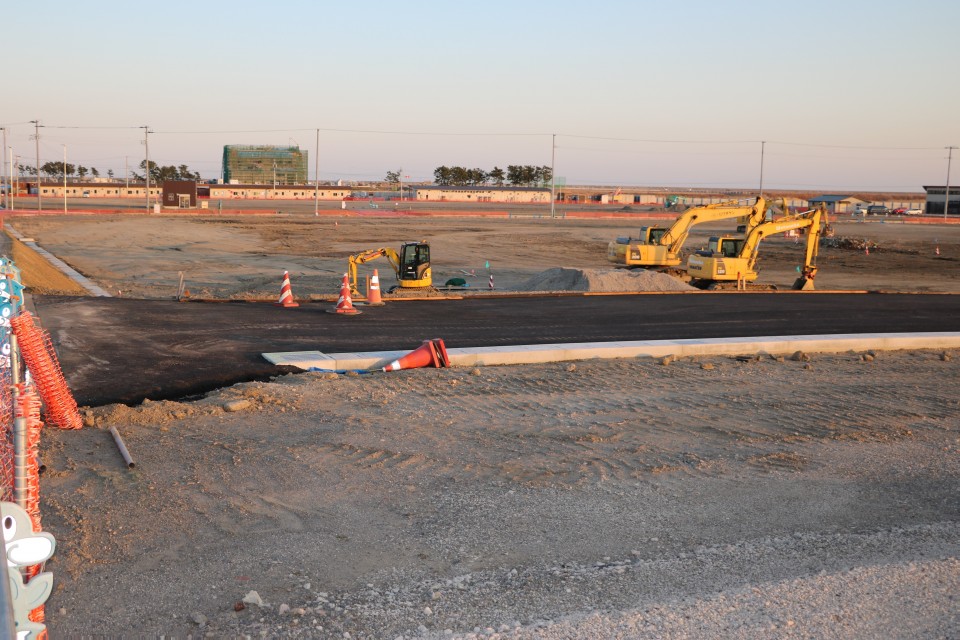 (Photo shows a road under construction and vacant lots near Yuriage Port Morning Market on Feb. 21, 2020.)

"We thought that we could encourage Yuriage people by resuming the market as soon as possible, so we had no doubts about linking Canada and the district," Sugiura said.

Making full use of donations worth 1.5 million Canadian dollars ($1 million), three of the six current market buildings were completed in May 2013 and the rest in December the same year funded by subsidies from the Japanese government.

The renewed market has been attracting more visitors than before the disaster, with the number increasing about 50 percent, although it has been declining over the past few weeks, apparently due to concern over the spread of the coronavirus, according to the union.

Sayuri Tanno, a 47-year-old local resident said she and her husband come to the market once or twice a month to buy fish and other foodstuff.

"Before the tsunami, the market was a bit messy, but after the renewal, the buildings are nicer, tidier and more comfortable," she said.

Sakurai said several barbecues were recently set up on the premises so that visitors can grill and eat their purchases, and the revamp has turned the market into "a place to enjoy not only shopping but also eating," and succeeded in drawing more people, especially those with small children.

"It was essential for us to rebuild the market buildings in the same place as before, and support from people across Japan and other countries like Canada made a dream come true," Sakurai said. "If we didn't, nobody would want to come to Yuriage."

In fact, Yuriage's population is on the rise, reaching nearly 3,000, after it bottomed out at about 2,000 in 2016. Among them are newcomers, drawn by its proximity to Sendai and its low land prices.

But many former residents did not immediately return to Yuriage, partly because it took about three years for the city government to determine where to construct new residential areas for residents who lost their homes.

The issue had divided the locals, with some claiming inland areas were more suitable in case there was another tsunami.

In October 2014, the city finally started raising the ground level by 5 meters and putting up seawalls so new houses could be built. But many former residents had already left.

Satoko Ishizuka, 71, who moved to an inland area about 3 km southwest of Yuriage with her husband in 2015, said she is satisfied with the couple's choice.

"I love Yuriage, but here is more convenient because it's closer to a supermarket and a train station," she said. 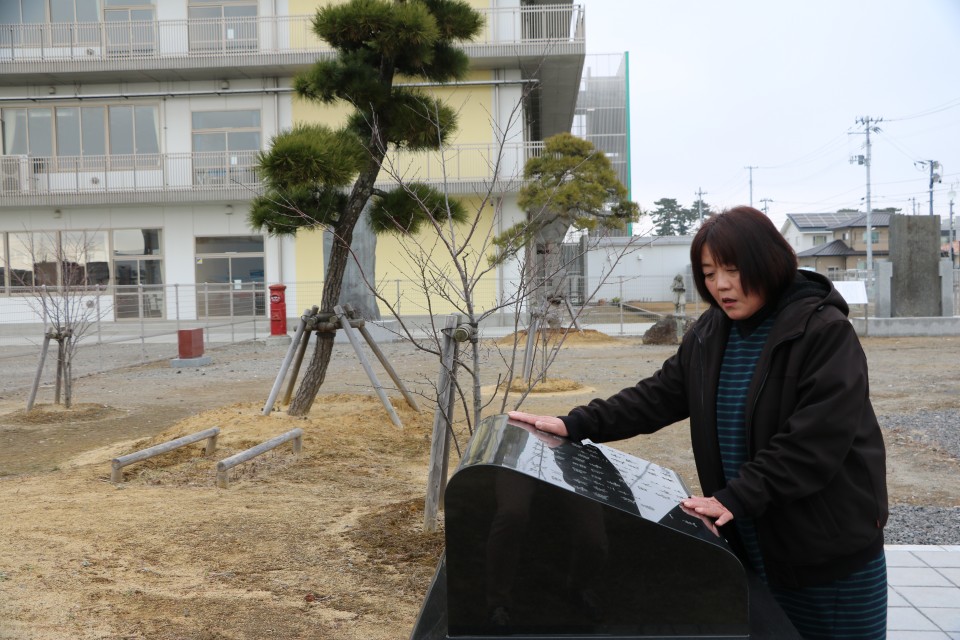 (Yuko Tanno visits a monument in memory of local students who lost their lives in the March 2011 earthquake-tsunami disaster, including her son Kota, in Yuriage district in Natori on Feb. 22, 2020.)

On the other hand, Yuko Tanno, 51, who lost her 13-year-old son Kota in the tsunami, moved into a brand new house built two years ago on the raised ground, close to where her former home was located.

"If the city's decision to build houses in Yuriage had been taken much earlier, more people would have come back," Tanno said. "It took up too much time."

Tanno's husband and daughter had argued that they should move elsewhere, but Tanno held firm.

"I thought that if Kota's soul is still in Yuriage, it would be better to live in a place where he can come back whenever he wants. The choice of moving to another safer place would have made me feel guilty."

On the first anniversary of the disaster, Tanno and five other parents of local junior high school students who lost their lives in the tsunami erected a memorial monument at the school.

The city integrated the district's elementary school with the junior high school and opened it two years ago, and the monument was relocated to the new site.

Before the postponement, the Olympic torch relay section in Natori was slated to start from the market and finish at the unified school.

"We want the world to see how much we managed to revive, and want foreign tourists to use the Tokyo Games as an opportunity to go a little further into the countryside like here," Sakurai said. 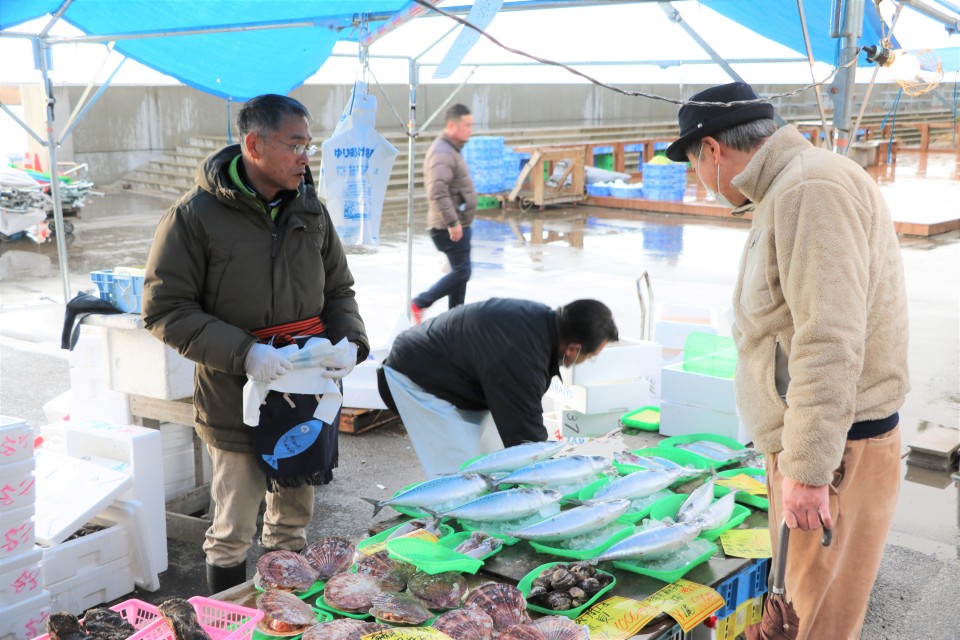 Meanwhile, Tanno has mixed emotions about the Japanese government billing the Tokyo Olympics, initially due to begin July 24, as a "Reconstruction Olympics."

"Indeed, we've got a chance to give thanks to people across the world (by hosting the torch relay), but some still live in temporary dwellings, and some are still missing," Tanno said.

Tanno also lamented that some newcomers in Yuriage do not know "fully comprehend what happened here nine years ago."

"I'd like everyone to learn that the devastated areas have been revived, but that's not all. I would be glad if they think of why our district and our houses are so tidy and neat, and why the relay runs through our district," Tanno said.