For Ryoji Sakuma, a farm boy from a village not so far from the site of the 2011 Fukushima nuclear disaster, the Olympic torch relay was only ever something to watch on television.

The 15-year-old was advised by his school teacher to apply to become one of about 10,000 torchbearers through a public recruitment campaign but never thought that he would actually be selected.

"In the future, I hope people around the world will drink milk from the cattle that I raise," Ryoji, a third-year student at Katsurao Junior High School, wrote last summer on his application form for the Japan leg of the torch relay to begin next Thursday for this summer's Tokyo Olympics.

The starting point of the 121-day relay is the J-Village soccer training center in Fukushima Prefecture, which was used by Tokyo Electric Power Company Holdings Inc. until about three years ago as an operation base for workers who battled the nuclear crisis, triggered by the catastrophic earthquake and ensuing tsunami in March 2011.

Despite the continuing spread of the new coronavirus around the world since December, including in Japan, the flame will travel through all of Japan's 47 prefectures ahead of the games' opening ceremony on July 24. 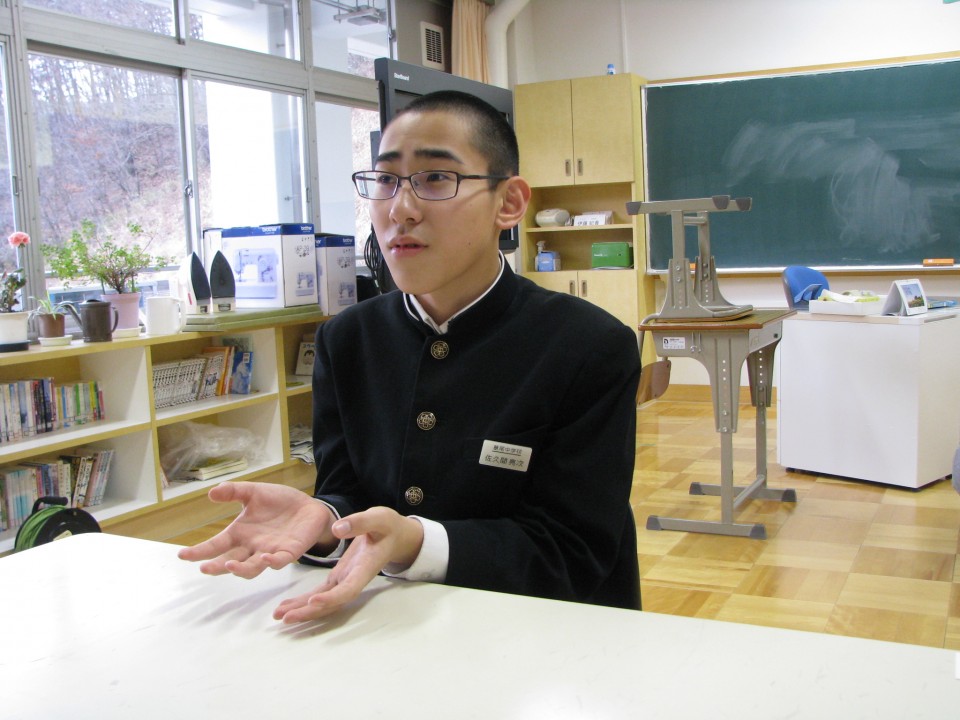 "By running, I want to let people know how far the reconstruction of Katsurao has come, though it is not yet complete," Ryoji said at his school in the village, which has a registered population of about 1,400 people, out of which only some 400 were actually living there as of March 1.

"I used to put on protective gear here before heading to the Fukushima Daiichi nuclear plant to give tours for the press," said Yusuke Takana, an official of the facility that opened in 1997 as the country's first national soccer training center.

"Hosting the Olympic Games in Japan is a once-in-decades opportunity, and it was an honor that the J-Village was chosen as the grand starting venue for the torch relay in the country," he said.

"I think it is a great chance for the J-Village and Fukushima to spread information on the current situation since the disaster," Takana said.

Characterizing the Summer Games as a "Reconstruction Olympics," Japanese officials hope they will showcase the progress of recovery in areas hardest hit by the magnitude 9.0 earthquake in the northeastern region, including the prefectures of Iwate and Miyagi. 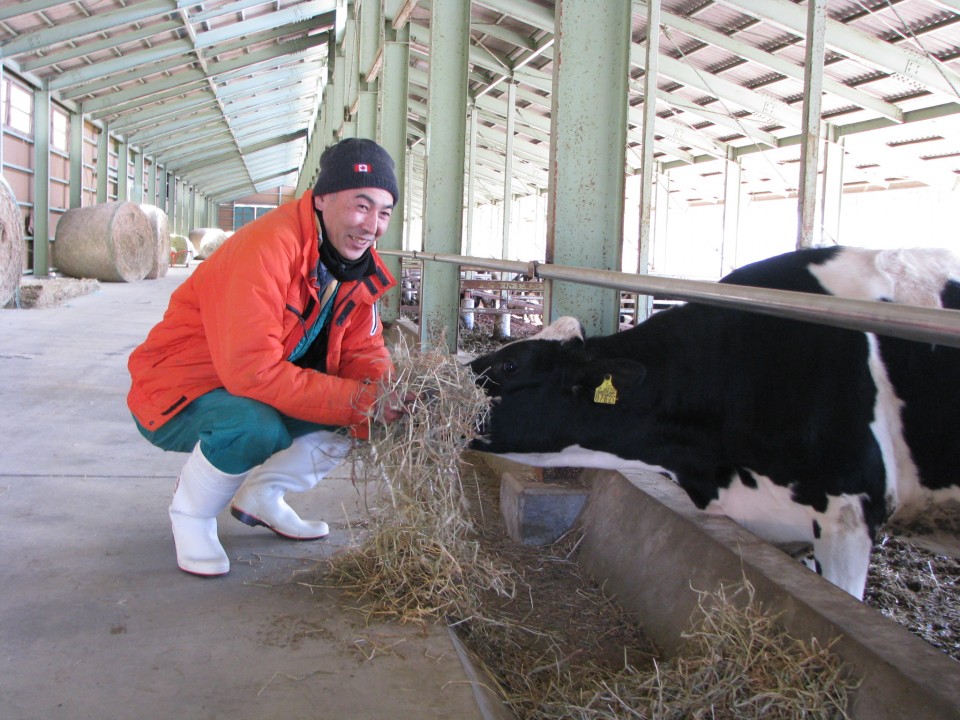 Still, public concern over radiation exposure was once again heightened after Greenpeace Japan informed the Japanese government and Olympic bodies last November that radioactive hot spots had been detected around the start of the torch relay route.

The discovery prompted TEPCO, operator of the crippled-nuclear power plant, to remove the soil from the spots.

In January, the Fukushima prefectural government released the results of its own measurements and reiterated that radiation levels around the relay route pose no danger to runners and spectators.

The local government said their potential exposure will be well below the permissible level of 1 millisievert per year, even if they stay around a hot spot with the highest level of radiation for four hours.

Losing their cooling systems, three reactors at the plant suffered meltdowns and spewed radioactive particles into the air, forcing a mass evacuation of residents.

Like Ryoji's family, some people have returned to their hometowns and resumed livestock farming, in the hope of reviving one of the major industries in Fukushima Prefecture.

Animal husbandry accounted for about 24 percent of the agricultural production in the prefecture, second after rice, in 2017, according to the local government. 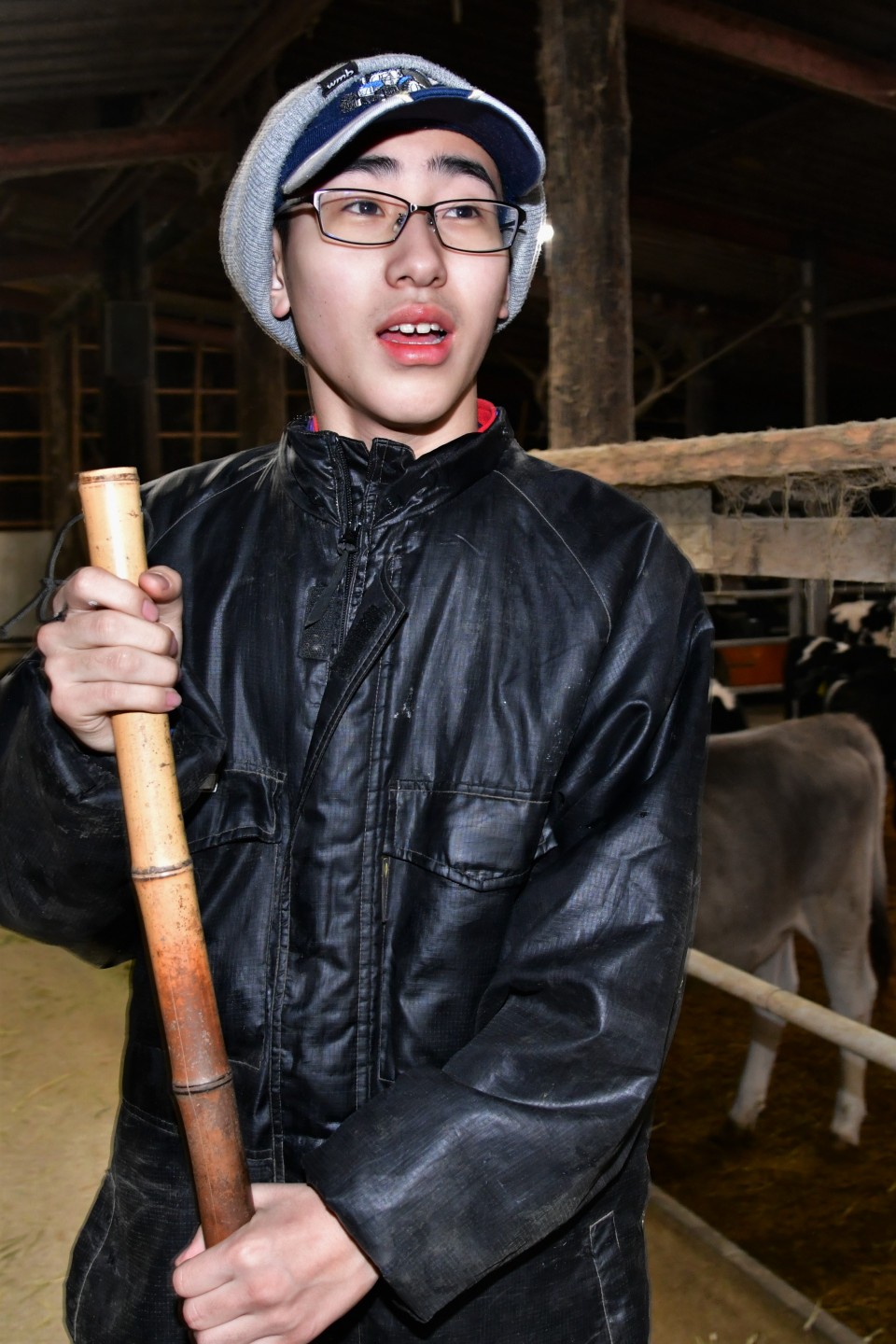 Since the nuclear disaster, dairy farmers have been tackling concerns about their products. To make sure that their milk is safe to consume, they need to continuously prove that it has no radioactive materials in official examinations.

Ryoji's father, Tetsuji Sakuma, 44, was operating his farm at a point 23 kilometers from the nuclear plant. Back then, he owned some 130 dairy cattle and produced about 2,700 liters of milk a day.

But the nuclear crisis forced him to dump milk in agricultural fields from the next day and evacuate the village. Along with many others, Sakuma had to slaughter his cattle for meat or sell them at below-market prices, while about a dozen of his cows died.

"All my farm came to zero with the loss at the time, after having spent years in finally achieving the goal of breeding cows only with high productivity," Sakuma said.

While he was finding refuge in several places both in and outside the prefecture, Sakuma vaguely dreamed of reopening a dairy farm but was unsure if he could do it when he thought of the enormous challenges ahead.

"Around then, my son wrote, 'I am determined to become a dairy farmer' in a calligraphy class at an elementary school. That gave me the final push I needed," Sakuma said.

Ryoji, who is now planning to study dairy farming at an agricultural high school in the prefecture, has been helping his father by getting up at five in the morning. 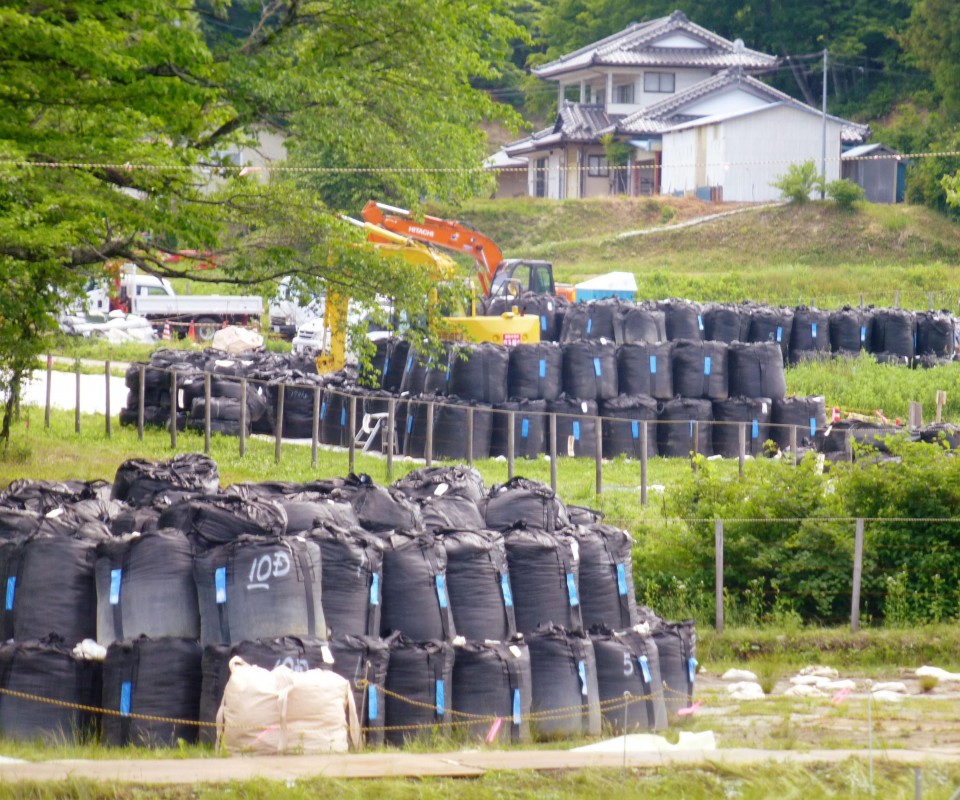 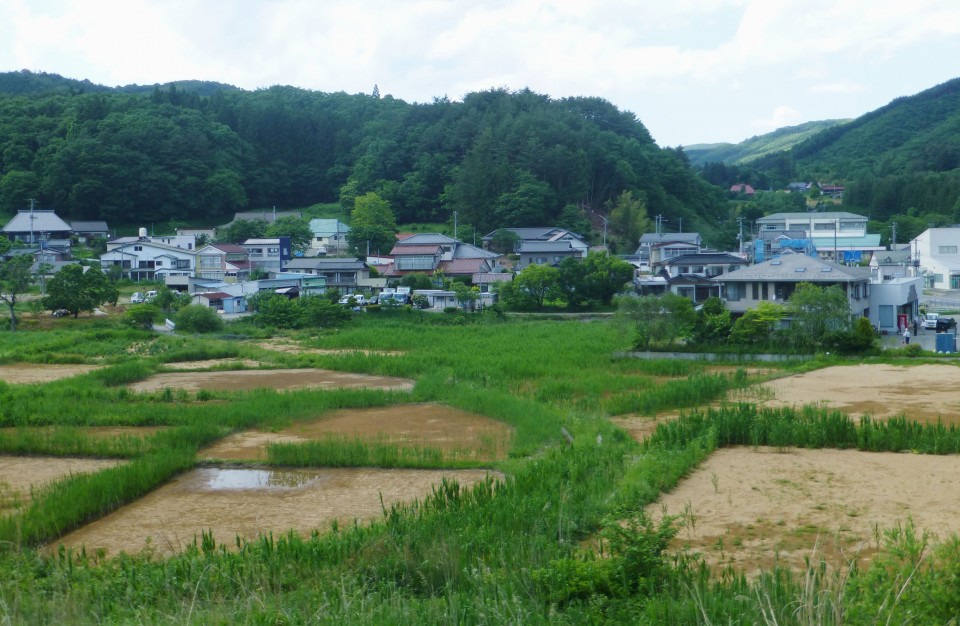 Sakuma and his family resettled in Katsurao in April 2018 following the lifting of milk shipping restrictions for the village in December 2016, except for a "difficult-to-return zone," and began shipping milk in January 2019 for the first time in nearly eight years.

Although the quantity of milk output has not recovered to the level before the disaster, his farm has already surpassed the quality of products of previous days.

In February this year, the farm won the top prize in a contest by the National Federation of Agricultural Cooperative Associations' local branch on the quality of raw milk and a barn environment.

Sakuma said it was the first time that the farm had won the award since his father started their dairy business more than 40 years ago.

Sakuma has tried to revitalize Katsurao through farming and said the number of his cattle is around 130 now, about the same as before the disaster, but about 30 of them are calves.

"I hope my son's run will inspire and motivate villagers who have been working to reconstruct the area day and night," Sakuma said.

However, there are some in the prefecture who remain skeptical of the idea of a "Reconstruction Olympics."

Kazumasa Tanaka, president of the farming company Feliz Latte and an avid Olympic fan, said he will be thrilled to see the torch relay passing through the nearby village of Iitate, as well as baseball and softball games to be played in Fukushima. 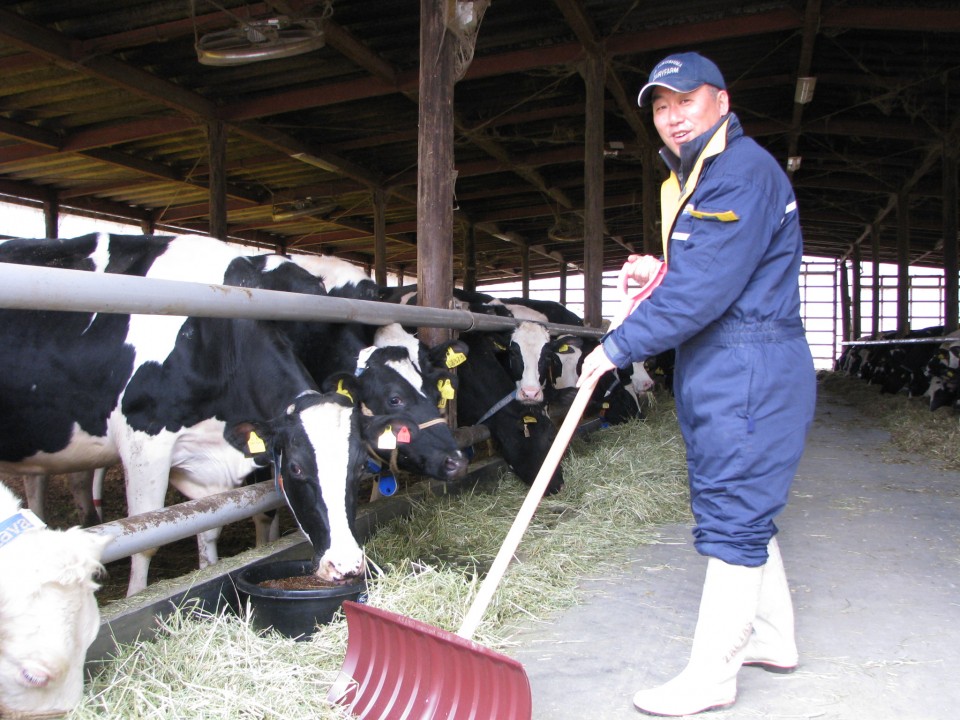 But Tanaka said he would feel slightly uncomfortable if too much emphasis is placed on the idea of "reconstruction" with respect to the Tokyo Olympics.

"In the end, it's the athletes who compete in the Olympic Games that should be the center of attention, not the construction work or recovery," Tanaka said.

Tanaka brought back dairy farming to Iitate in July last year, becoming the first person to do so following the nuclear accident.

The 49-year-old launched a calf-raising facility in the village where about 120 young Holsteins are currently being reared. He also runs a dairy farm, called Feliz Latte "reconstruction farm," with around 600 cattle in the city of Fukushima.

He said he will be happy if spectators and other visitors take the time to travel to disaster-stricken areas and see the progress in recovery, or some places that are lagging behind, during the Olympics, but it should be a secondary concern.

The Reconstruction Agency has said people can lead a normal life in about 97.5 percent of Fukushima Prefecture, but many former residents of severely-hit municipalities in the coastal region of "Hamadori," including Katsurao and Iitate, have not returned.

Nationwide, nearly 48,000 people have yet to return to their hometowns since the 2011 quake rocked Japan.

"I personally wonder what a 'Reconstruction Olympics' really means and how the games mainly played in Tokyo will actually benefit people living in disaster-hit areas," said Kenji Takahashi, director of Ozasa Farm Co., who moved to Katsurao with his wife and son to start a chicken farm.

But as for the torch relay, the 33-year-old said, "It is good that people who know nothing about Katsurao will discover the village by some means," adding he hopes that many people will move into the village as he did.