Japan marked the ninth anniversary Wednesday of the massive earthquake and tsunami in its northeastern region that left more than 15,000 people dead, but health fears over the spread of the new coronavirus caused several events to be canceled or scaled down.

A state-sponsored memorial ceremony that had been held every year in Tokyo since 2012 was canceled for the first time, with Prime Minister Shinzo Abe delivering an address at his office instead.

Many municipalities in the hardest-hit prefectures of Fukushima, Iwate and Miyagi, which canceled or postponed their ceremonies, still set up areas for people to lay flowers, while others drastically downsized their events.

The tsunami following the quake on March 11, 2011, engulfed the six-reactor Fukushima Daiichi plant and triggered the world's worst nuclear disaster since the 1986 Chernobyl crisis.

Fukiko Takahashi, 77, from Ishinomaki, Miyagi Prefecture, put her hands together as she gazed over the city toward the ocean from Mt. Hiyori.

"Many people I knew died. Nine years have passed but it's still painful now," she said. 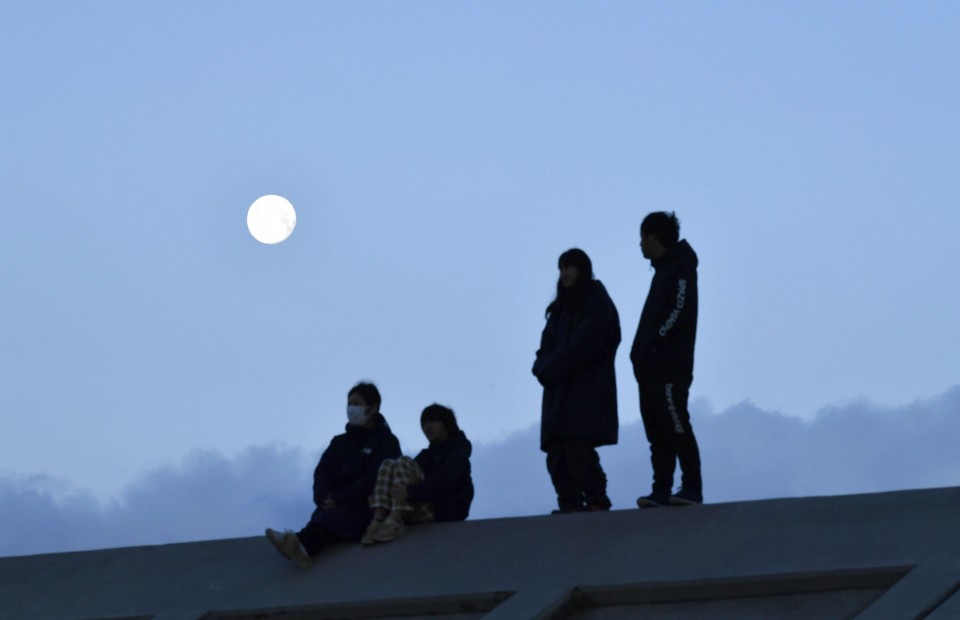 (People visit the coast of Arahama in Sendai, Miyagi Prefecture)

Residential areas in parts of the city were swept away by the tsunami, and although four public housing facilities stand on the elevated site, much of the land in those districts remains empty.

Flapping in the wind in Onagawa, Miyagi Prefecture, are around 360 yellow handkerchiefs filled with messages of hope for revitalization penned by residents.

"It is a day we must not forget. May this re-etch the memory in people's hearts," said Junichiro Kano, 69, a former teacher who planned the idea.

Many across Japan observed a moment of silence at 2:46 p.m., when the magnitude 9.0 quake struck northeastern Japan.

"We must never forget the valuable lesson we learned by this immense sacrifice," Abe said at a small ceremony attended by about 20 government officials.

As concerns over the virus continue to mount, the Tokyo Olympic and Paralympic Games organizing committee is also considering scaling down the Japan leg of the Olympic torch relay, set to begin on March 26 from the J-Village soccer training center, located some 20 kilometers from the nuclear plant.

Futaba, the final town that was totally off-limits due to radiation as it hosts parts of the crippled Fukushima plant, had its entry ban partially lifted for the first time last week, with the government keen to show off the northeastern region's recovery ahead of its hosting of the torch relay.

"I can finally stand at the start line for reconstruction. I want to brace myself anew," said Futaba town office official Nobuo Moriya, 42.

But with the ban lifted in only some parts of the town, residents will not be allowed to return until the spring of 2020 onward. 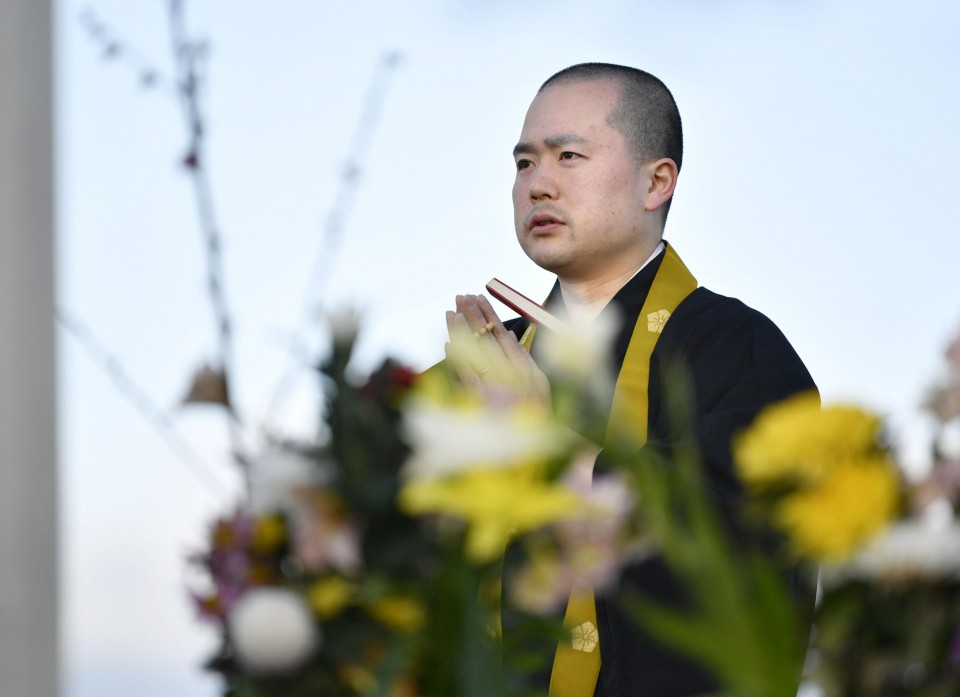 (A monk prays in front of a memorial in Sendai, Miyagi Prefecture)

Over 90 percent of residents have not returned to the towns of Okuma and Tomioka, which had their evacuation orders lifted earlier with the progress of decontamination work. Okuma also hosts the Fukushima Daiichi complex.

In the three prefectures, more than 90 percent of public housing for disaster victims has already been completed, and East Japan Railway Co.'s Joban Line will reopen fully on Saturday for the first time since the triple disaster.

The number of evacuees still living in prefabricated housing in the three prefectures stood at 740 at the end of January.

While the number of displaced people has dropped from its peak of 470,000, around 48,000 have yet to return to their hometowns since the devastating quake rocked the region.

Many have also chosen not to return, with the population of 90 percent of the 42 disaster-hit municipalities declining compared to what they were previously.

A 44-year-old former resident of Okuma, who chose not to return, now lives in temporary housing in Iwaki in Fukushima Prefecture after a new home she built around five years ago in her new home city was flooded by Typhoon Hagibis last October.

"I'm grateful just to be alive, but I want to go back to my normal life as soon as possible," she said.

As of March 1, the disasters had left 15,899 people dead and 2,529 unaccounted for, mostly in the prefectures of Fukushima, Iwate, and Miyagi, according to the National Police Agency.

Nearly a quarter of those who died of illness or stress linked to the disasters in the three prefectures were people with disabilities, a recent Kyodo News survey showed.

Another survey by Kyodo found that at least 242 residents of public housing in the three prefectures had died alone, revealing the need to develop networks to support elderly residents and prevent them from becoming isolated.

Of those living in public housing in the three prefectures, about 30 percent are aged 65 or older and live alone.

Last week the government approved a bill that will extend the life of the Reconstruction Agency, established to oversee rebuilding efforts, until 2031 -- a decade longer than initially planned.

Three of the Fukushima plant's six reactors suffered a meltdown when flooding from the tsunami caused their cooling systems to fail. Tomoaki Kobayakawa, president of the plant's operator Tokyo Electric Power Company Holdings Inc., vowed Wednesday to ensure that such a disaster never occurs again.

"We have to be humble in accepting that we weren't able to prepare for and prevent the accident and can't forget to reflect on and learn from this. We have to remember that the pursuit of safety is endless," he told about 700 workers at the Fukushima plant via a video feed.

TEPCO says the process of decommissioning the crippled facility could last until 2051, though there are doubts over whether they can stick to that timeframe in the face of numerous technical challenges.

In December, the government and TEPCO decided to delay the removal of spent fuel from the plant's Nos. 1 and 2 reactor pools by as much as five years from the initially scheduled fiscal 2023 to take further safety precautions.

They have also yet to decide how to dispose of more than 1 million tons of water contaminated with low-toxicity radioactive tritium being kept in tanks on the premises, even though space is running out.