China and South Korea have expressed support for Japan's hosting of the Tokyo Olympics and Paralympics in their "complete form," Japanese Foreign Minister Toshimitsu Motegi said Friday, as the coronavirus pandemic casts doubt on whether the Summer Games can be held as scheduled.

After a teleconference with his Chinese and South Korean counterparts, Wang Yi and Kang Kyung Wha, Motegi said they agreed to cooperate to contain an outbreak that has killed more than 10,000 worldwide.

The three Asian nations will arrange to hold a teleconference between their health ministers at an early date to share information on their response to the pandemic, he said.

Speculation has been brewing that the Olympics, which are slated to begin on July 24, and the Paralympics starting Aug. 25, will be postponed as the coronavirus continues to spread.

Japanese Prime Minister Shinzo Abe this week vowed to hold the Summer Games in their "complete form," meaning having spectators at the venues and without downscaling any of the events. He has not mentioned the possibility of canceling or postponing the events. 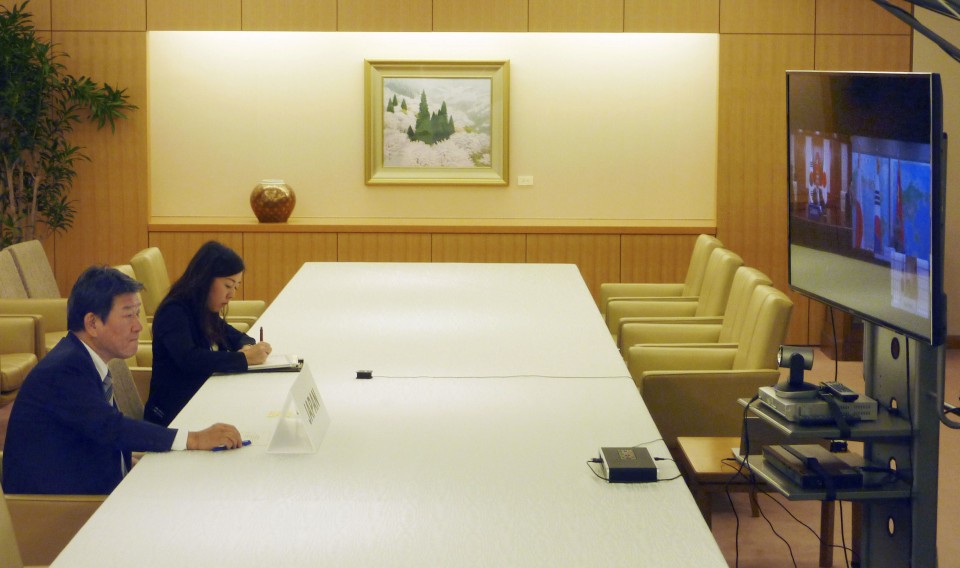 In the teleconference, Motegi said the quadrennial sports event would be "a symbol of humankind's victory over the virus." Wang said he is looking forward to the event, while Kang said she supports Japan's position on the matter.

Motegi also explained the reasoning behind Japan's decision earlier this month to impose travel restrictions on the countries.

"It will be necessary to take appropriate border measures for a while. It also serves to prevent the virus from spreading overseas," Motegi said at the beginning of the teleconference, which was open to the media.

Japan implemented tougher border control steps on March 9, effectively banning entry by Chinese and South Korean visitors through the end of this month as part of measures to prevent a surge in coronavirus infections.

The move was criticized by Kang as "unscientific" and "unfair," and South Korea quickly retaliated with similar measures.

The outbreak that originated in Wuhan, central China, has infected more than 200,000 worldwide. Cases were initially focused in Asia but the World Health Organization says the epicenter has shifted to Europe, as cases in countries including Italy, France and Spain have surged.