Japan's approach to social distancing during the coronavirus pandemic might seem to other nations around the world like it is very social, and not so distant.

As communities from Milan to Melbourne find themselves compelled to hunker down in their homes, peeking through the curtains at a world they once roamed freely, coronavirus life in Japan has been much like it ever was, save for some extra hygienic precautions.

Major sporting events have been disrupted or are being played behind closed doors. Companies are asking workers to consider working from home. And the spring tradition of spending time under cherry blossom trees is now more strolling than sitting.

Until very recently, Japanese authorities had not felt the need to impose stricter measures in Tokyo, home to nearly 14 million people. Only on Wednesday, Tokyo Gov. Yuriko Koike requested that citizens stay indoors over the weekend, citing "an important phase in preventing an explosive rise." 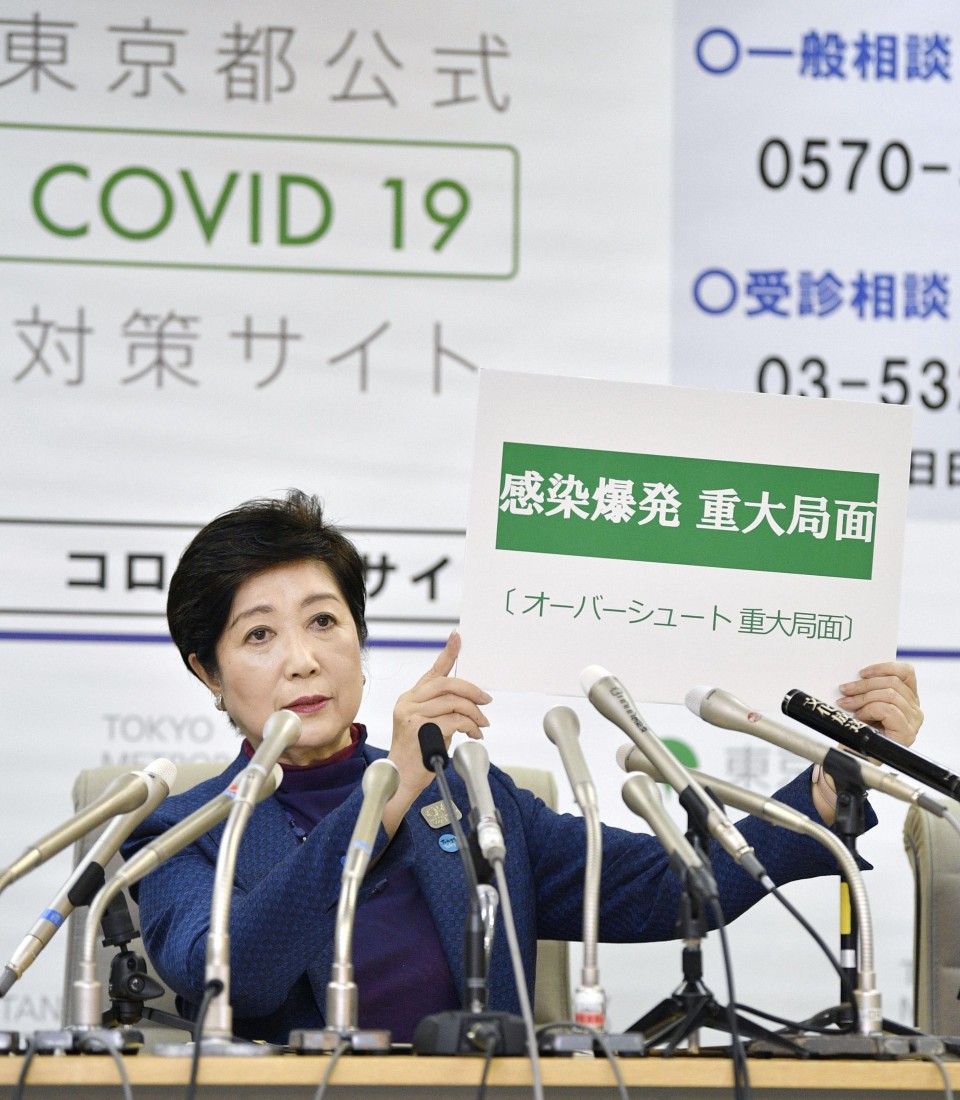 One message to the public, however, has gotten through clearly: wash your hands, wear masks on public transportation to be considerate of others and avoid contact with the elderly and others vulnerable to the pneumonia-causing illness.

While the Diet gave Prime Minister Shinzo Abe the authority to declare a state of emergency if the situation worsens, raising questions about restrictions on individual freedoms, social distancing Japan-style has been embraced, perhaps because it is so noninvasive.

Compared to draconian measures imposed in China, and lockdowns in Europe and the United States, freedom to live life as normal amid the pandemic has been a reality for most in Japan.

But this appears to have more to do with the current situation regarding the virus in Japan and the government's stance, thus far, than a sense of ignorance or naivete.

"Teleworking is quite stressful for me as I feel like I am confined to my home. So on weekends, I actually go to Shinjuku or other metropolitan cities," said Keishi Hasegawa, 34, an IT consultant in Tokyo who has been required to work from home and has stocked up on supplies such as rice.

Unlike some other places in the world, including cities and states in the United States, Japan has not yet ordered the closure of nonessential businesses, such as restaurants, cafes, or hair salons. Nonessential activities and internal travel have also not been shut down. The governors of Osaka and Hyogo have asked people not to travel between the prefectures, and Hokkaido, one of the hardest hit by the virus, has issued a temporary state of emergency.

Hasegawa said he had closely watched a live televised press conference by Abe on March 14 in fear that he might declare a state of emergency.

"I was a little relieved. It's unclear what would actually happen if such a state of emergency is called. I feared maybe public transportation would be affected," said Hasegawa, adding that he still goes to meet clients in person, if they ask.

Remarkably, Japan has seen a slow rise in the number of coronavirus cases compared with other countries, such as Italy, Spain and the United States, whose cases have grown exponentially.

As of Thursday, Japan had 2,018 cases, including 712 from the Diamond Princess cruise ship, and 55 deaths, while Italy, for instance, had more than 74,380 cases and over 7,500 deaths -- far surpassing China, where the coronavirus first emerged, with the most pandemic-related deaths in the world.

Japan's fortune to have at least so far escaped the worst of the pandemic has led to many theories being hatched.

Some have attributed the country's existing mask-wearing etiquette to the lack of cases, while critics argue that not enough testing has been conducted nationwide to get a full picture of an epidemic that might be lurking relatively unseen.

Despite the social distancing warnings, the virus outbreak has certainly not stopped many Japanese from celebrating hanami, or cherry-blossom viewing. They have congregated in parks, although the drinking and eating parties are either nonexistent or subdued. 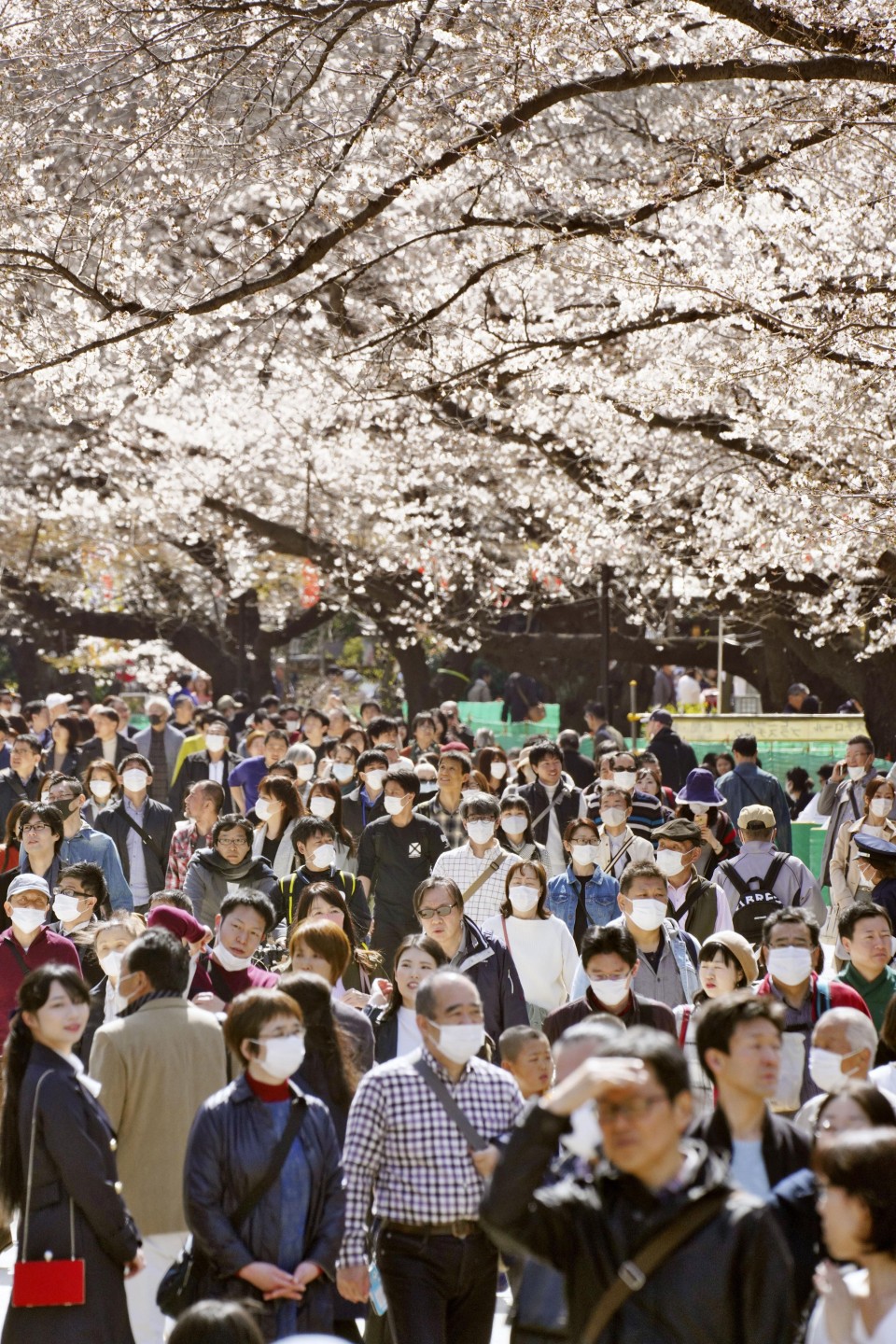 Abe has requested that big sports and cultural events be canceled or postponed nationwide and schools to be closed through the spring break to prevent the spread of virus, while also asking residents to avoid confined and crowded areas, buffet-style restaurants and gyms.

In the largest domino to fall, the Tokyo Olympics and Paralympics were postponed until 2021, apparently due more so to the global nature of the outbreak than what is occurring in Japan.

There have yet to be city lockdowns or "stay-at-home" orders, such as in Britain and India, issued yet in Japan.

People in Japan have had to make sacrifices in their own way.

Yukiko Akai, 46, a resident of Saitama Prefecture, near Tokyo, said she has had to make changes to her lifestyle and prioritize family while staying mindful of calls to implement social distancing measures, especially when thinking about her 10-year-old son Hanzo, whose school has been closed since mid-March.

But instead of frustrating her, she finds her new schedule has proved somewhat of a blessing in disguise.

"Before school closures, I felt like I was always rushed and occupied with trying to keep on schedule, such as taking my son to school, making him do homework, and getting him to go to bed. I tended to get irritated," she said.

"Now, I feel more relaxed with him," she said, satisfied with his school's policy to give assignments online and communicate with students via email. But she worries about how long her son will be deprived of the opportunity to take part in classroom discussions and interactions with friends and classmates.

Akai, who teaches private English lessons for kids, said she has not stopped classes because they are small in size with a maximum of six children. Parents of her students want her to continue as other official activities and large events have all been called off.

She said she still allows Hanzo to play with friends in neighborhood parks, although she has heard of other cities in Japan where police have been warning parents about allowing their children to play outdoors due to the virus.

Akai has driven her car to visit her sister, who lives in Hyogo Prefecture in western Japan, thinking that it is better than using public transportation. Although inconvenient, the virus outbreak has also opened up ideas about new ways of living, she said.

"This series of cancellations of events and mass social gatherings could change how people look at their lives. I have also started to think about pursuing a self-sufficient life by growing vegetables," she said.

Naomi Kumazawa, 35, also said she sees this period of social seclusion as a period to reassess her life. She spends time tidying up the house, rearranging furniture and cooking. She, like Hasegawa, refrains from meeting friends outdoors. She said she was considering sending a video birthday message to her mother.

"It is disappointing that I can't go meet my parents out of fear that I could spread the coronavirus, but because of that, my emails to them have become more heartfelt. I have become more focused on what I want to tell them," she said.

Experts agree that social distancing is effective in preventing the disease from spreading. They recommend keeping a distance of 1.8 meters from those around you.

Neither Hasegawa, Akai nor Kumazawa say they have been observing social distancing to such a strict degree, and nobody in Japan is forcing them to do so.

Other places around the world have also experienced problems with enforcing rules of social distancing, such as spring breakers shown partying on beaches in Florida as the pandemic creeps into their country.

University of Virginia physicist Louis Bloomfield described the math behind social distancing in a video posted on his YouTube channel earlier this month.

"At present, each person with COVID-19 transmits coronavirus to an average of about two to three people. With such a large multiplying factor, we have rapid exponential growth," he said in the video.

The physics professor went on to explain how social distancing acts to reduce the multiplying effect, citing cases of success in China and South Korea, both of which have lowered their transmission rates to less than one and are now experiencing exponential decay.

"With regards to others, we all need to act as if we might have COVID-19, and do what we can not to infect them. Every positive action we take as individuals has the statistical possibility of decreasing the overall transmission rate," Bloomfield said.

"From a statistical point of view, every time you keep your distance from others during this crisis, you are saving lives," he said.

But political experts warn that the law giving broad power to Abe to declare a state of emergency for mandated restrictions, enacted March 13, must be executed with caution as it could violate basic human rights.

Shigeki Uno, a politics professor at the University of Tokyo, called it "dangerous medicine," which ironically could potentially threaten the rule of law, he said.

"If the government were to declare a state of emergency, it will have to clarify more what the emergency is. It is necessary to carefully decide what kind of rights will be restrained and for how long," he said.

"Citizens should not accept the declaration casually, but understand the gravity of the restrictions," he said.

Around 70 people demonstrated on the streets in Kyoto on March 10, ahead of the enactment of the law.

Akai imagines that introducing stricter measures as observed abroad to combat the pandemic might be excessive, even though she is well-aware of the health risks caused by the deadly virus.

"For a parent with a child, I cannot imagine being forbidden to go outside at all," Akai said, who was surprised to hear about countries introducing measures such as observing social distancing of up to 1.8 meters.

"Public events and mass gatherings being canceled are disappointing, but it can't be helped. We will just need to observe the rules."

(Donican Lam and Reito Kaneko contributed reporting to this story.)