The number of confirmed cases of Wuhan coronavirus in Taiwan has increased to 16, while Taiwanese people who have visited China, Hong Kong or Macau in the past two weeks must now quarantine themselves at home for 14 days, the island's health officials said Thursday.

The five new cases include a married couple in their 50s who visited Italy via Hong Kong between January and February and a woman in her 40s who traveled to Macau in January.

The other two are a man in his 40s who worked in Wuhan, the epicenter of the outbreak, last December, and a woman in her 20s who lived in the central Chinese city. Both returned to Taiwan this week.

The Central Epidemic Command Center on Thursday also banned all cruise ships from calling in Taiwan ports after a mass outbreak on the Diamond Princess, which is currently quarantined in Yokohama, near Tokyo. 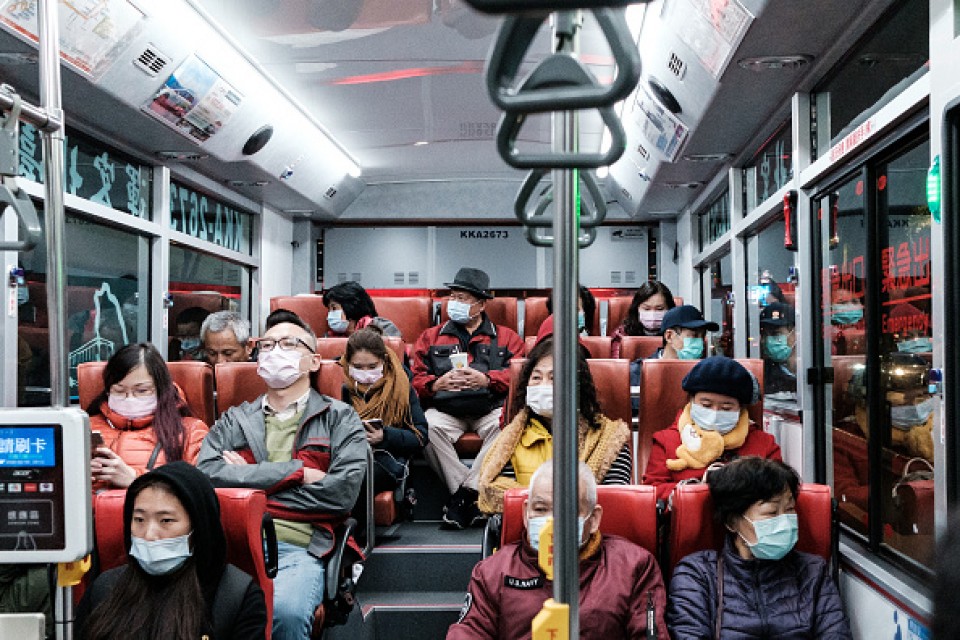 (People on a bus in Taipei wear masks to protect themself from the coronavirus.)
[NurPhoto/Getty/Kyodo]

The vessel stopped at the port city of Keelung in northern Taiwan on Jan. 31. According to Taiwanese media, many passengers visited temples and the Palace Museum and ate at hotels, prompting disinfection measures at various places.

The Mainland Affairs Council, which handles Taiwan's relations with China, announced Thursday that, given the spread of the virus in China's Guangdong Province, it will from Friday suspend entry procedures for residents of Hong Kong and Macau, which border the province.

The center on Thursday imposed a total ban on Chinese travelers going to the island from the mainland.

The center said one of the 13 confirmed cases has already recovered from the novel coronavirus and will be allowed to return home, adding that the remaining 12 are all in stable condition.

Amid a shortage of facemasks, the center on Thursday began limiting sales to two per individual over a seven-day period, while also requiring the public to present their health insurance IDs upon purchase at drugstores.

Meanwhile, Foreign Ministry spokeswoman Joanne Ou on Thursday denounced the World Health Organization for caving in to Chinese pressure and listing Taiwan under China as part of a high-risk virus area, confusing the international community and leading to some countries to ban flights from Taiwan.

Ou lodged a protest and urged the WHO to immediately correct the "preposterous" and "ridiculous" categorization of Taiwan and call Taiwan by its official name, the Republic of China, saying "Taiwan is not a part of China."

Taiwan and mainland China have been governed separately since they split amid a civil war in 1949. Since then, Beijing, which regards Taiwan as a renegade province awaiting reunification, has endeavored to bring the self-ruled, democratic island into its fold, by force if necessary.

The novel coronavirus has killed over 560 people and sickened over 28,000 others in China. It has spread from there to over two dozen countries and regions.