Nine passengers and a crew member on a cruise ship quarantined off Yokohama have tested positive for a new coronavirus originating in the central Chinese city of Wuhan, the health ministry said Wednesday.

The development prompted the Japanese government to ask all passengers and crew members to stay inside their rooms on the ship as much as possible for up to 14 days starting Wednesday as it continues screening and works to prevent the illness from spreading in the country.

By nationality, three of the 10 infected people in their 50s to 80s are Japanese, three are Chinese, two are Australians, one is an American and another is a Filipino, according to Carnival Japan Inc., the operator of the cruise ship Diamond Princess.

The vessel with 2,666 passengers and 1,045 crew members from 56 countries and regions aboard has been kept in quarantine at anchor off a pier in the Kanagawa Prefecture capital after a disembarked 80-year-old passenger from Hong Kong was found to be infected with the pneumonia-causing virus.

The ship headed for the Pacific Ocean in the afternoon to proceed with work necessary for its operation, such as creating fresh water and managing ballast water.

The city of Yokohama said the vessel will dock Thursday morning to restock food and other supplies.

The Japan Coast Guard said one of its helicopters will deliver 7,200 masks to the ship to prevent the virus from spreading at the request of the health ministry. 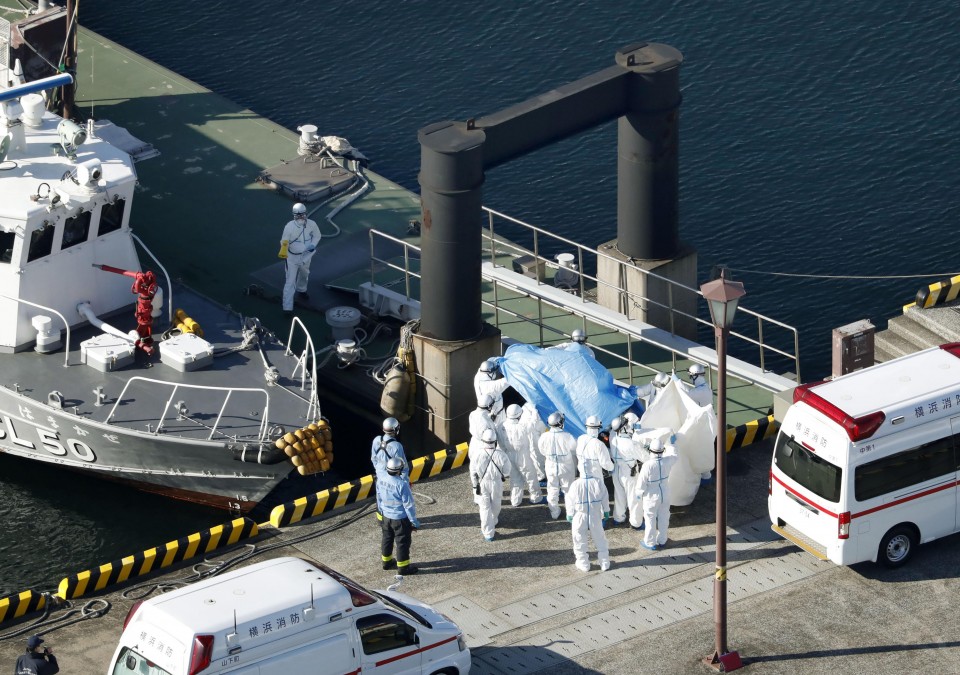 (Health officials in protective gear transfer people on board Diamond Princess found infected with a new coronavirus from a Japan Coast Guard patrol boat to an ambulance parked at a pier in Yokohama near Tokyo on Feb. 5, 2020.)

The number of infections in Japan rose to 35, with the government separately reporting two new cases.

In Chiba Prefecture, a man in his 40s who arrived in Japan on Jan. 21 from Wuhan has tested positive for the virus. His wife was confirmed Tuesday to also be infected in the prefecture east of Tokyo.

A Chinese man in his 20s residing in Kyoto, meanwhile, was also found infected. He had had contact through his work with Chinese tourists.

On China's mainland, more than 24,000 people have been infected, with the death toll rising to 492, according to the country's health authorities.

Foreign Minister Toshimitsu Motegi said the Japanese government is planning to dispatch its fourth chartered flight to Wuhan on Thursday to bring home Japanese nationals who wish to return.

Of the cruise passengers and crew, 120 who have displayed symptoms including a cough and fever and 153 who had close contact with the infected passenger were tested for the virus, the Health, Labor and Welfare Ministry said.

Results for 31 people came back, and the 10 found to be infected were sent to four hospitals. Health minister Katsunobu Kato said it will take several days before the results for the remaining people come out. 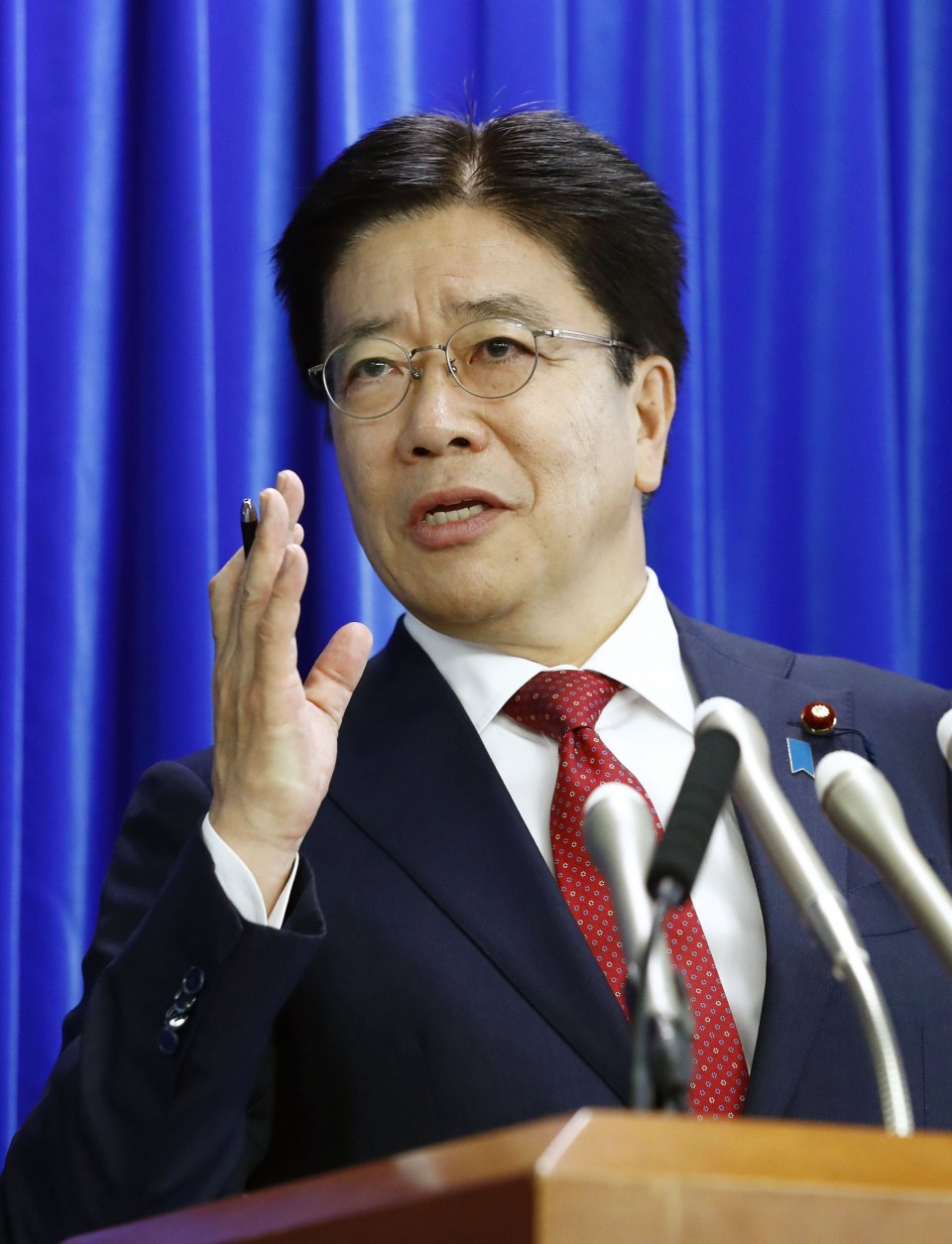 Of the 10, two went on the same bus tour as the Hong Kong man when the ship made a stop in Kagoshima, southwestern Japan, according to the ministry.

No one is showing severe symptoms, and some have no symptoms at all, the ministry said. They were all hospitalized to prevent infections from spreading further.

Kato also said it will take "a certain amount of time" before Japan can develop a rapid test kit and a vaccine to protect people from the deadly virus, when asked by an opposition lawmaker during a parliamentary session.

The elderly and those with pre-existing conditions on the ship will be tested for the virus as they tend to be the worst affected if infected, the ministry said.

"We will take appropriate measures to prevent the spread of infections while giving full attention to the health of the passengers and crew," Kato said at a press conference.

The infected man from Hong Kong flew to Tokyo in mid-January and boarded the cruise ship in Yokohama on Jan. 20. He disembarked in Hong Kong on Jan. 25. 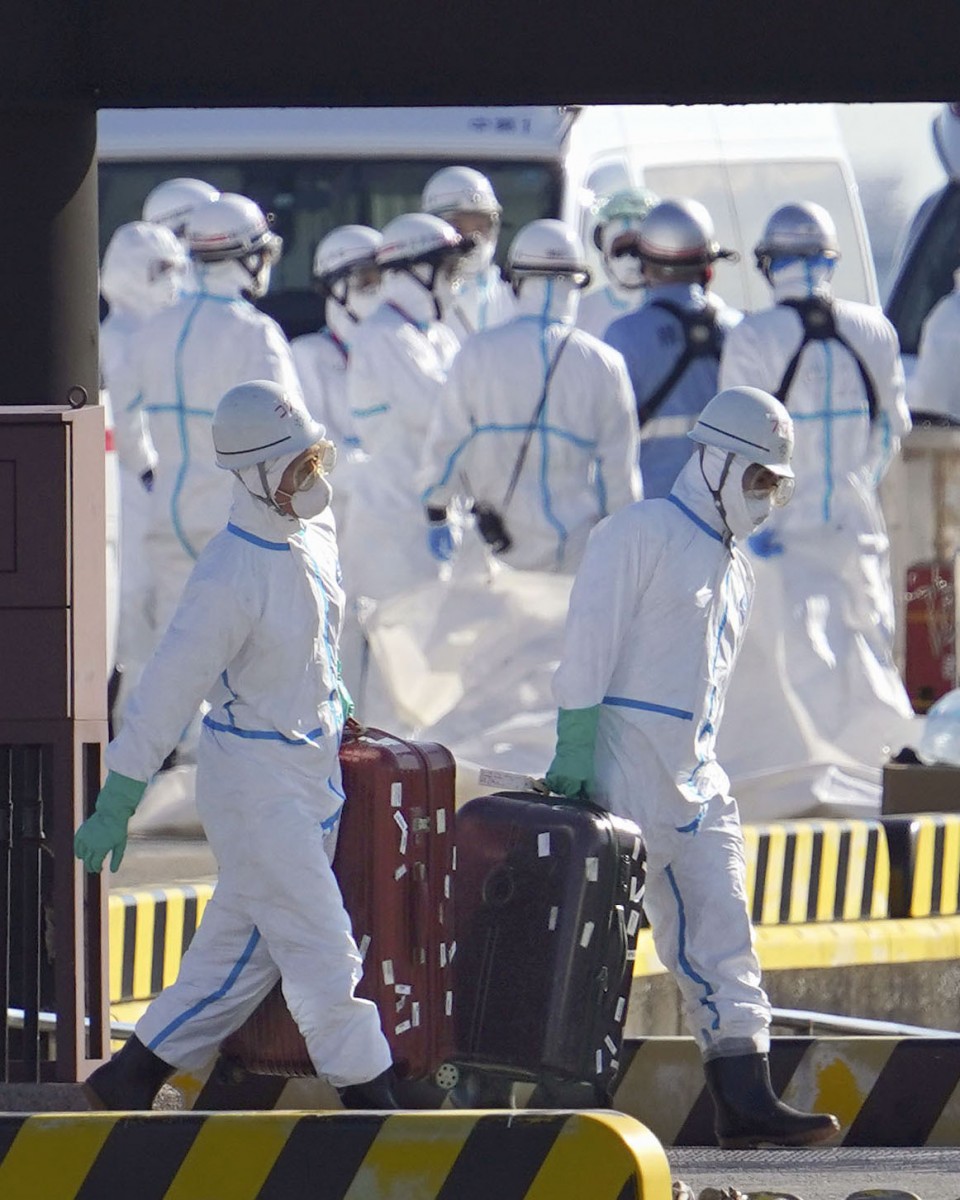 (Health officials in protective gear collect the baggage of Diamond Princess passengers at a pier in Yokohama near Tokyo on Feb. 5, 2020.)

The number of foreigners arriving in Japan on cruise ships has been on the rise in recent years, with those from China hitting 1.74 million last year, making up about 80 percent of the total 2.15 million, according to the transport ministry.

The total figure has increased 12-fold from the level in 2013, when the ministry started taking records.

After departing Yokohama on Jan. 20, the Diamond Princess stopped at Kagoshima two days later before arriving in Hong Kong. It then traveled to Vietnam and Taiwan before calling at Naha, Okinawa Prefecture, on Saturday and then returning to Yokohama on Monday night, according to its operator.

The ship passed quarantine in Naha but the ministry decided to redo it following the discovery that the Hong Kong man had been infected with the coronavirus.

Thirteen people disembarked in Naha, but none has shown symptoms, and they had all left the southernmost island prefecture of Okinawa by Tuesday, according to the health ministry and local authorities.