Organizers asked for event cancellations for 2 weeks amid coronavirus spread 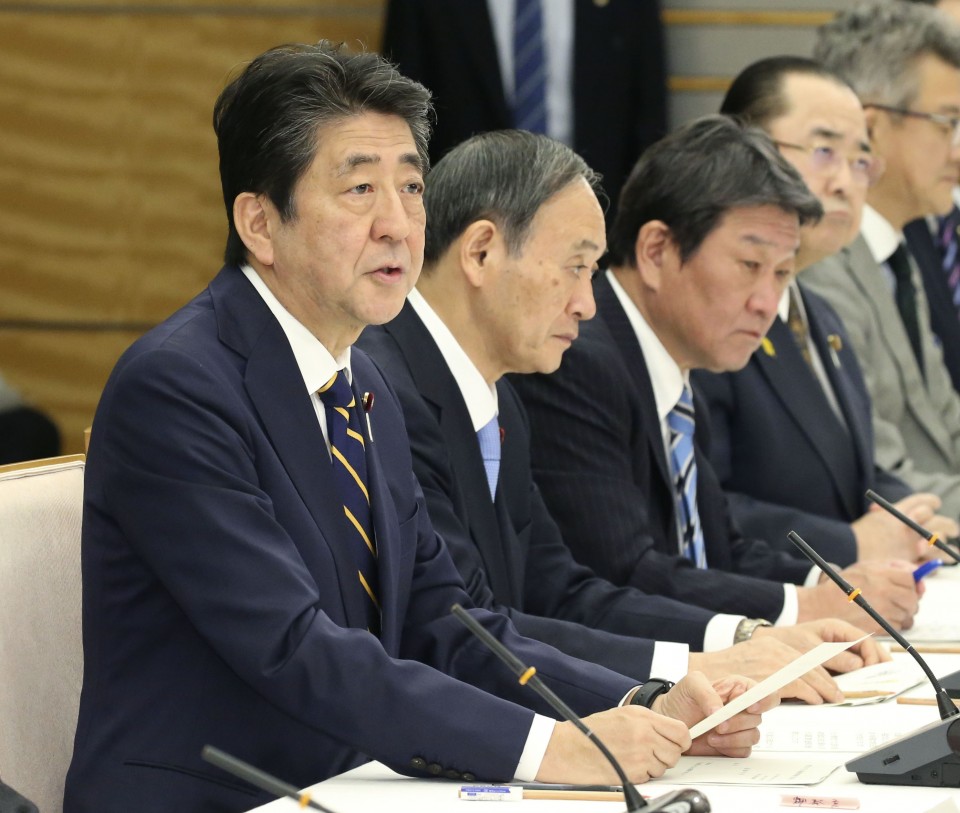 (Prime Minister Shinzo Abe speaks at a meeting of a government task force on the viral outbreak on Feb. 26, 2020.)

TOKYO - Prime Minister Shinzo Abe on Wednesday asked organizers of big sport and cultural events scheduled for the next two weeks to consider canceling or postponing them during what is seen as a critical time for Japan to stem a rise in new coronavirus infections.

Abe's request comes as mass gatherings are feared to raise group transmission risks in a country where small groups of infections, or clusters, have appeared sporadically and medical experts say the next two weeks will be "critical" in determining whether the pneumonia-causing virus will spread further.

The government also plans to scale back its annual event in Tokyo to commemorate the victims of the powerful earthquake and tsunami that devastated northeastern Japan on March 11, 2011, according to government sources.

"In view of large-scale transmission risks, we've decided to request (organizers) to cancel, postpone or hold sports and cultural events nationwide on a smaller scale than planned for the next two weeks nationwide," Abe told a meeting of a government task force.

The government request immediately led event organizers to announce cancellations or rethink their original plans due to the spread of the new coronavirus that originated in the central Chinese city of Wuhan.

Koichi Hagiuda, minister of education, culture, sports, science and technology, said relevant sport and cultural organizations were asked to weigh canceling or putting off big events until around March 15.

J-pop groups Perfume and Exile canceled their concerts scheduled for Wednesday night at Tokyo Dome in Tokyo and Kyocera Dome in Osaka, both of which have a capacity of 55,000.

Nippon Professional Baseball said it will hold all 72 of its remaining preseason games behind closed doors. It follows an announcement by the Japan Rugby Football Union earlier in the day that it will postpone 16 games across two rounds of the Top League season.

National museums in Tokyo, Nara, Kyoto and Fukuoka prefectures will be closed from Thursday to March 15 or 16.

The government had refrained from making an outright request and instead asked them to "re-examine" the need to hold big events. But Abe stepped up his calls on Wednesday, a day after his government's basic policy on how to address the coronavirus outbreak drew criticism that it lacked specifics.

Some opposition party lawmakers have said the wording was vague and the government should clarify its position.

Chief Cabinet Secretary Yoshihide Suga said there is no legal basis for the government to force organizers to accept the request, saying, "It's up to each organizer to decide."

The request comes at a delicate time for an economy that contracted in the October to December quarter. If the outbreak puts a damper on consumer sentiment for an extended period, it could also cloud the outlook for the Japanese economy, analysts say.

Students are also taking college entrance examinations across the country and graduation ceremonies will be held in the coming weeks.

In Hokkaido, the local education board urged local authorities to close all 1,600 elementary and junior high schools on the northernmost main island after more than 30 cases were reported. 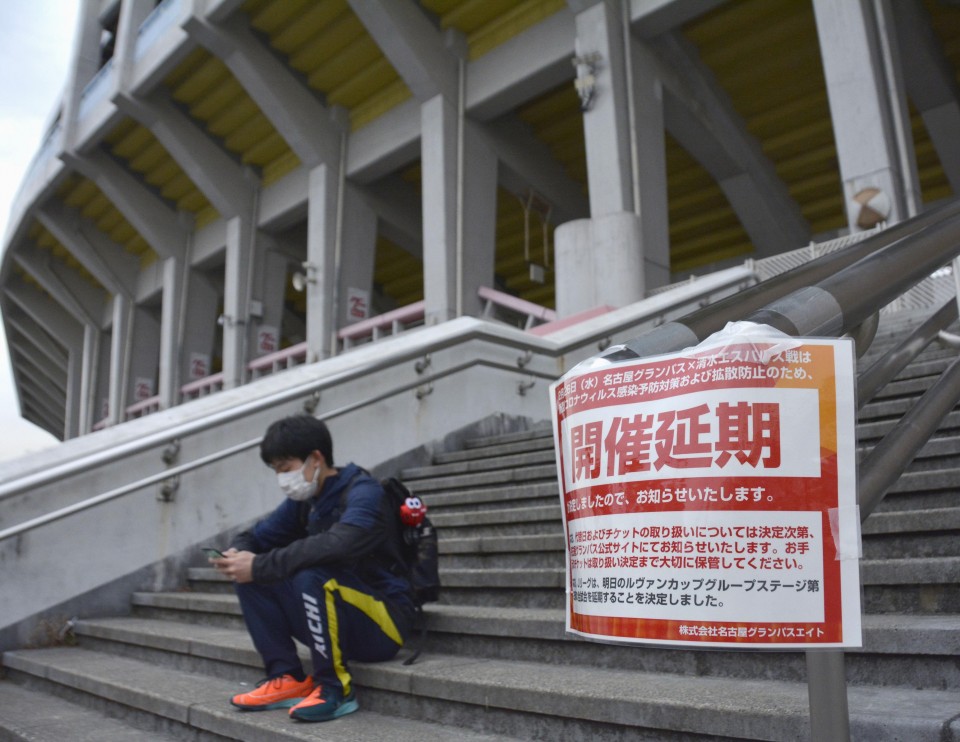 (A football fan sits at Paloma Mizuho Stadium in Nagoya, Aichi Prefecture, central Japan, on Feb. 25, 2020. A signboard set up beside him shows that a YBC Levain Cup match scheduled for the next day at the stadium has been postponed amid the spread of the new coronavirus.)

After two additional fatalities in Hokkaido and Tokyo were reported, the death toll linked to the viral outbreak rose to seven, including four from the Diamond Princess, a quarantined cruise ship near Tokyo.

In all, over 890 cases have been confirmed, although the bulk of them are from the cruise ship. The health ministry said an additional 14 -- five passengers and nine crew members -- have tested positive for the virus.

The government has come under fire at home and abroad for its decision to keep thousands of passengers and crew confined for two weeks as critics say the quarantine was not effective.

Also on Wednesday, an emerging coronavirus outbreak in South Korea prompted Abe to expand Japan's existing entry ban to some visitors from the Asia neighbors.

Starting Thursday, Japan will ban entry by foreign nationals who have visited the South Korean city of Daegu and the neighboring county of Cheongdo in North Gyeongsang Province, the center of the coronavirus outbreak in the country.

The entry ban will target foreign nationals who have been in the city or county within two weeks prior to their arrival in Japan, Abe said.

The Japanese Foreign Ministry had raised its travel alert for the city and the county in southeastern South Korea, asking Japanese nationals not to make nonessential trips to the area.

Japan has so far barred entry to foreign nationals who have been in China's Hubei Province -- whose capital is Wuhan, the epicenter of the outbreak -- and Zhejiang Province. 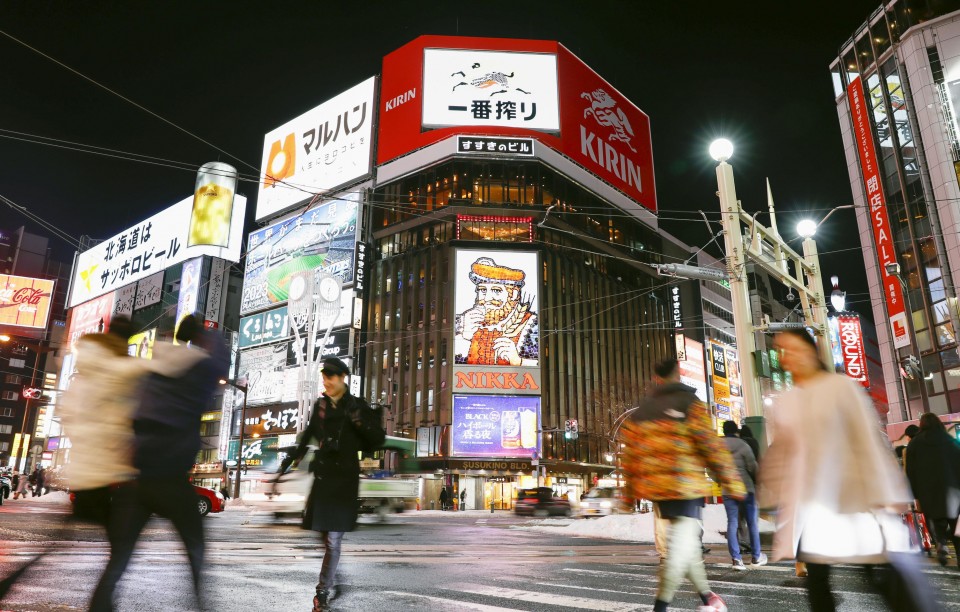 (Photo taken Feb. 25, 2020, shows fewer people than usual walking on a street in the Susukino entertainment district in Sapporo in Hokkaido.)

Separately, a Japanese civil group said it has canceled a plan to send about 15 high school students to South Korea in late March for an exchange program to call for abolishing nuclear weapons. It has been organizing such trips annually since 2003.

The students had been scheduled to meet with South Korea-based survivors of the U.S. atomic bombings of Hiroshima and Nagasaki and engage in other activities during the trip to Busan and elsewhere from March 27 to 30.

South Korea reported over 280 new coronavirus cases on Wednesday, bringing the total number of infections in the country above 1,200, surging from only 51 a week ago.

About 80 percent of confirmed cases came from two clusters of infections -- at a branch of a religious sect in Daegu and a hospital in Cheongdo, according to South Korean media.

The virus has spread to about 30 countries from mainland China, which now has confirmed over 78,000 cases and more than 2,700 deaths.

In a travel alert, the Japanese Foreign Ministry urged Japanese citizens not to make non-urgent trips to Iran which has seen a sharp rise in the number of coronavirus cases.