Nippon Professional Baseball said Wednesday it will hold all 72 of its remaining preseason games behind closed doors, becoming the latest Japanese sporting body to take drastic steps to address the spiraling coronavirus crisis.

It follows an announcement by the Japan Rugby Football Union earlier in the day that it will postpone 16 games across two rounds of the 2020 Top League season.

Representatives from NPB's 12 teams decided at an extraordinary meeting to hold the popular sport's preseason in empty stadiums a day after the Yomiuri Giants said fans would be barred from two preseason games this weekend at Tokyo Dome. NPB's regular season is slated to open on March 20.

"This was a bitter decision to make. Because we can't determine the situation, I won't say anything right now about (Opening Day)," NPB's Commissioner Atsushi Saito said. "If possible, we all want to go ahead on March 20." 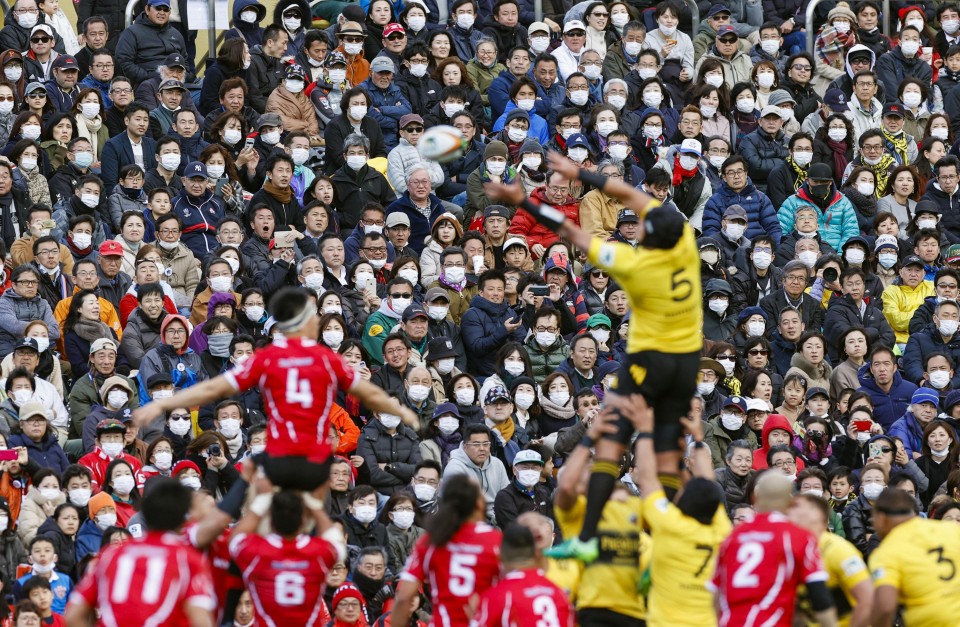 (Most spectators wear masks during a Rugby Top League match in Tokyo on Feb. 22, 2020, amid coronavirus fears.)

It is the first time NPB has barred fans from attending preseason or regular season games, although practice games just prior to the start of the earthquake-hit 2011 season were closed to fans. Officials have also prohibited fans from attending minor leaguers' instructional games. NPB's two minor leagues, the Western and Eastern leagues, are set to open on March 13 and March 14, respectively.

As the coronavirus outbreak continues to result in canceled events and even threatens the entire season for some sports, Japan's domestic rugby league said the current situation has made it impossible to keep the original schedule unchanged.

Now postponed, the seventh round of the competition was scheduled for Saturday and Sunday, and the eighth round on March 7 and 8.

The Top League features 16 teams that play a total of 120 games across 30 different venues in Japan. The season opened on Jan. 12 and is scheduled to end on May 9.

The moves came a day after Japan's pro soccer establishment, the J-League, halted all games until March 15.

Also on Wednesday, the Japan Boxing Commission and Japan Pro Boxing Association said they will either cancel or postpone all bouts scheduled to take place in Japan next month, citing the impact of the coronavirus.