Speaking on the fall campaign trail, Taiwan's Tsai Ing-wen described herself as a builder, saying that she spent her first four years as president "laying the foundation" and that she needed a second term to "begin raising the house."

In Saturday's general election, voters gave Tsai what she wanted.

They also sent enough of her Democratic Progressive Party colleagues to the legislature to help with the work.

With the final count in, Tsai secured 57 percent of the popular vote, against 38 percent for her main rival, Nationalist Party (KMT) candidate Han Kuo-yu. The DPP won 61 of the 113 seats in the legislature, a narrower margin than before, but still a controlling majority.

As always, foreign relations will be a key priority for the new administration. So it's ironic that laying the foundation for China, Taiwan's No. 1 foreign challenge, involved doing as little as possible the last four years.

Tsai avoided cross-strait issues in her first term so as not to irritate Beijing, which sees Taiwan as a renegade province, while Beijing, for its part, refused to engage in dialogue with the Tsai government, citing the pro-independence history of the DPP.

This changed in recent months due partly to increased Chinese pressure to accept mainland rule, and partly to election politics that required Tsai to defend the island's sovereignty.

(Taiwanese President Tsai Ing-wen of the Democratic Progressive Party in Taipei claims victory in the island's presidential election on Jan. 11, 2020.)

Months of unrest in Hong Kong added urgency to Tsai's message, while fatally handicapping Han and his China-friendly KMT.

Going forward, much for Tsai will depend on how China responds to her re-election.

While some see an opportunity for Beijing to rethink its Taiwan strategy, the common expectation among analysts, like Richard Bush of the Brookings Institution, is for Chinese leadership to continue its current mix of coercion and more covert tactics such as media manipulation, espionage and co-opting pro-China government officials, opposition parties and business owners.

Aware of the risks, Tsai's government recently passed legislation to provide legal means for authorities to reign in spying and fake news.

Since 2016, Tsai has also cultivated closer ties with the United States.

Douglas Paal of the Carnegie Endowment for International Peace sees U.S. efforts to upgrade diplomatic and security relations with Taiwan as part of a larger attempt to integrate the island into its Indo-Pacific Strategy against Chinese expansion in the region.

In addition to military aid, the United States has increased support for Taiwan as China seeks to isolate the island by poaching its diplomatic allies and blocking its participation in international organizations.

Some say Tsai should also take advantage of warming Taiwan-U.S. relations to conclude a long-delayed free trade agreement between the two.

Following up on such first-term gains will not be easy, however.

Already short of pilots, Taiwan's military will be hard-pressed to recruit and train personnel capable of operating the advanced systems that will soon begin to arrive. And despite U.S. efforts to deter them, diplomatic allies continue to be lured away by Chinese money.

Even an FTA, which would benefit both sides, faces strong opposition from Taiwan's agricultural producers who fear U.S. competition.

Prospects for Taiwan's other key foreign relationships are no better. 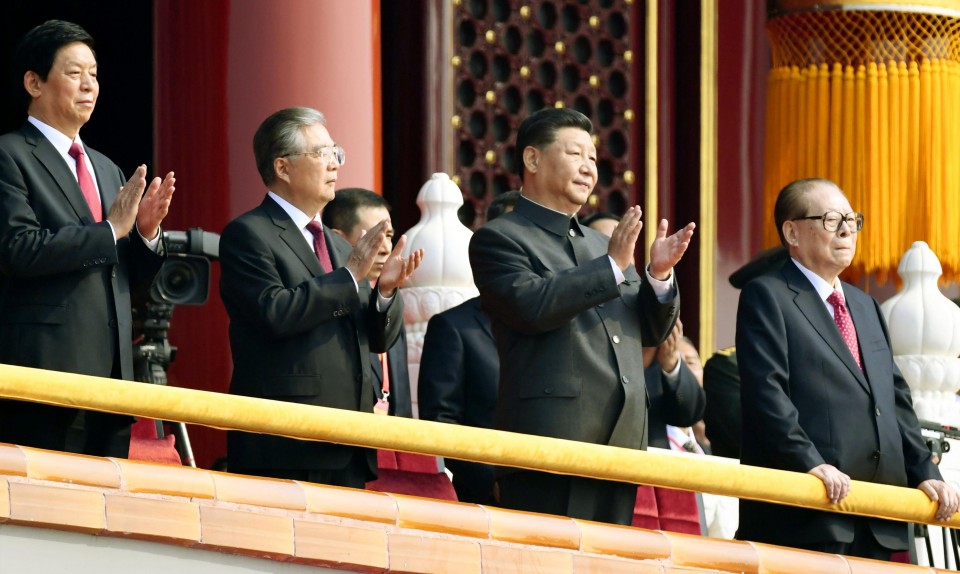 (Chinese President Xi Jinping (2nd from R) attends a ceremony in Beijing on Oct. 1, 2019, the 70th anniversary of the founding of the People's Republic of China.)

While ties with Japan are warm, with both sides downplaying trade and territorial differences, Tokyo has been cautious in dealing with Taiwan so as not to jeopardize its economic interests in China.

Thanks to U.S. prodding, Japan has made supportive gestures, but these have been largely symbolic, like adding "Taiwan" to the name of its representative trade office in Taipei.

So while Taiwan-Japan relations "won't get worse" in Tsai's second term, according to Lee Ming-chun, an expert on Japanese affairs at the Taiwan Brain Trust, "they won't get better either."

Taiwan's economy has performed well, partly due to the U.S.-China trade war, as Taiwanese companies that once moved production facilities to the mainland for cheap labor are now returning to avoid tariffs. The repatriation of investment and jobs will likely continue in Tsai's second term thanks to an incentive program unveiled last year by her administration.

The boost in domestic production may also help offset economic pressure should Beijing choose to reduce tariff-free trade across the Taiwan Strait under the Economic Cooperation Framework Agreement signed 10 years ago by then President Ma Ying-jeou of the KMT.

Another problem less pressing than it was in Tsai's first term is her 2016 campaign promise to end nuclear power in Taiwan by 2025. Doubts about her plan to develop alternative resources in so short a time became moot in 2018 when a public referendum nullified the deadline she set.

Perhaps the biggest domestic challenge Tsai faces in her second term is one she shares with other leaders in the developed world, which is inequality.

While unemployment is low, middle-class salaries stagnated in the last decade. Significant regional differences have also appeared, especially between the wealthy north, where technology and financial services are concentrated, and the south, where heavy industries and agriculture dominate.

During his successful run for Kaohsiung mayor in 2018, Han Kuo-yu focused on economic grievances, blaming the DPP for ignoring the needs of ordinary Taiwanese, especially young people forced to migrate north to find work.

It will be important to meet the expectations of working Taiwanese, according to J. Michael Cole of the Global Taiwan Institute in Washington.

More equitable wealth distribution is essential for the DPP, said Cole, "not only to win re-election but also to neutralize this segment as a future ground of support for populists like Han."

Tsai will benefit greatly in her second term from using her legislative majority to tackle reforms to the public pension system, labor laws, and family services, all of which serve the interests of Taiwan's growing youth demographic now seen as her party's chief base of support.

Taiwan's Tsai re-elected with Japan getting closer to Communist China