Prime Minister Shinzo Abe embarked on a five-day trip to the Middle East on Saturday as part of Tokyo's efforts to help reduce tensions in a critical region for resource-poor Japan.

The trip will take him to Saudi Arabia, the United Arab Emirates and Oman, countries which Japan sees as important players in stabilizing the situation in the Middle East, according to Japanese officials.

The visit precedes Tokyo's dispatch of Self-Defense Forces personnel and assets to the region to help secure the safe passage of shipping by enhancing intelligence-gathering capabilities. The SDF's operational areas include the Gulf of Oman and part of the Arabian Sea.

"Japan will take its own initiative to tenaciously conduct peace diplomacy so as to ease tensions and stabilize the situation in the region," Abe told journalists before leaving Tokyo's Haneda airport.

Abe said he wants to win support from the three countries for the SDF dispatch to the region since it is vital to ensure the safety of Japanese commercial ships operating there.

In Saudi Arabia, Abe plans to meet with King Salman and Crown Prince Mohammed bin Salman on Sunday. He will travel to the United Arab Emirates on Monday for a meeting with Crown Prince Sheikh Mohammed bin Zayed Al Nahyan. 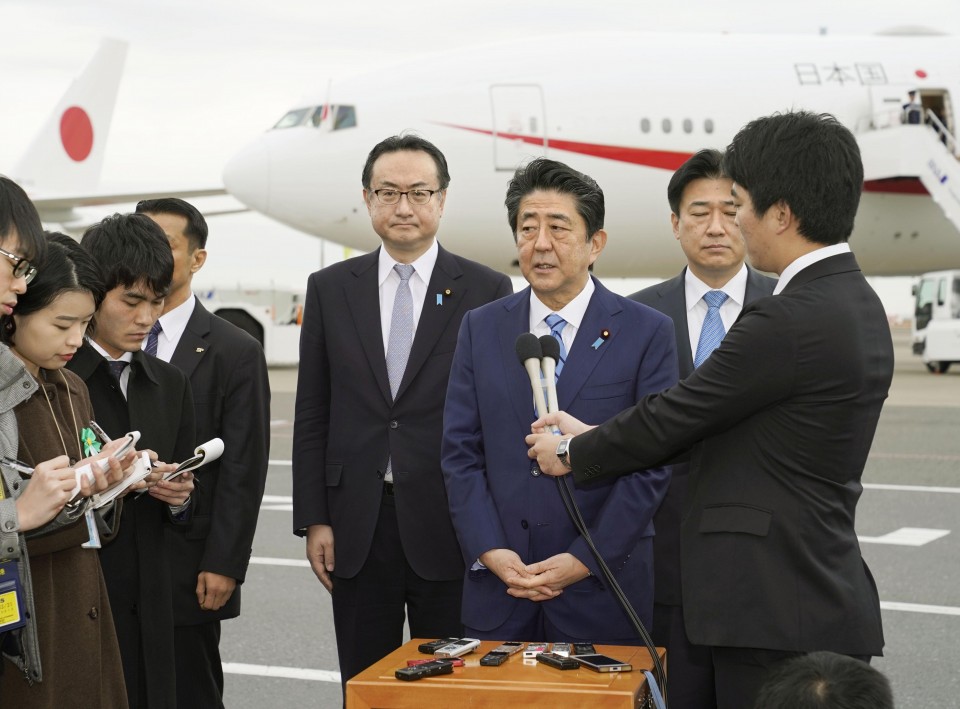 Abe is seeking to do his part in bringing stability to the Middle East, from which Japan gets most of its crude oil imports. Increased cooperation with Saudi Arabia, the United Arab Emirates and Oman is seen as key to securing stable energy supplies.

During the trip, he plans to brief leaders of the three countries on the SDF deployment, the Japanese officials said.

The dispatch is separate from a U.S.-led maritime initiative near the Strait of Hormuz.

A recent spike in tensions following the U.S. killing of a top Iranian commander initially prompted the Japanese government to weigh the option of canceling the trip.

Japan has good ties with both Iran and the United States despite a months-long standoff between Tehran and Washington over a 2015 nuclear deal. Abe has been urging all parties involved to exercise restraint to prevent the situation from escalating.

The prime minister is scheduled to return to Japan on Wednesday.