The United States believes a Ukrainian passenger plane that crashed in Iran, killing all 176 people on board, was most likely shot down accidentally by Iranian forces, U.S. media and Reuters reported Thursday.

The leaders of Canada and Britain, whose nationals were among the dead, also pointed to the possibility that an Iranian surface-to-air missile downed the Ukraine International Airlines aircraft early Wednesday.

Iran quickly denied the reports. Reuters quoted Ali Abedzadeh, the head of the country's Civil Aviation Organization, as saying to Iran's ISNA news agency, "Scientifically, it is impossible that a missile hit the Ukrainian plane."

Iran has invited the U.S. National Transportation Safety Board to participate in its investigation, and the accident investigation body has agreed to assign an investigator, Reuters reported. 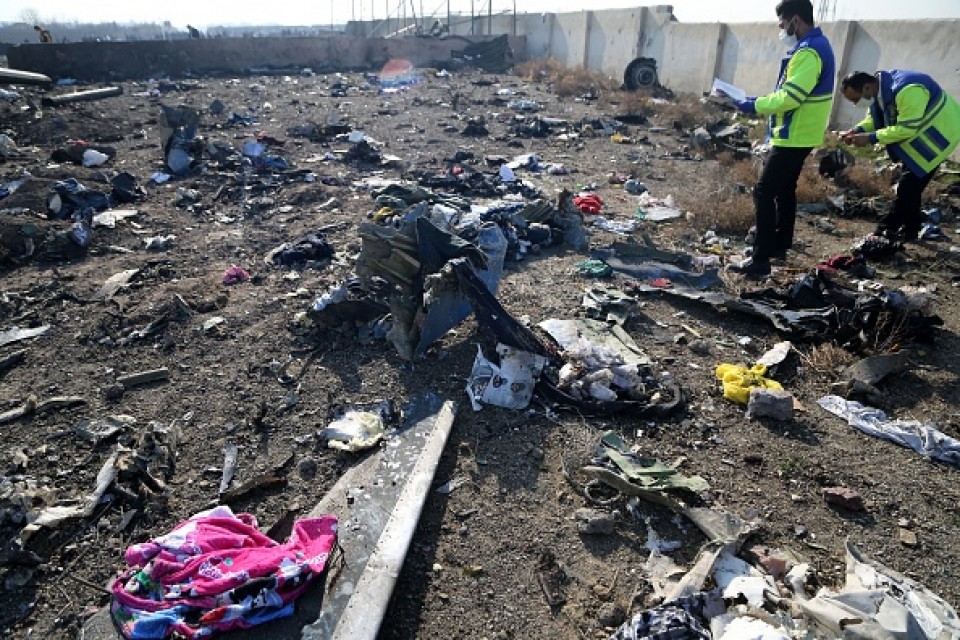 (Passengers' belongings are seen as search and rescue works are conducted at site after a Boeing 737 plane belonging to a Ukrainian airline crashed in Iran on Jan. 8, 2020.)
[Anadolu Agency/Getty/Kyodo]

The Boeing 737-800 jet bound for Ukraine's capital Kiev crashed shortly after taking off from Imam Khomeini International Airport in Iran's capital Tehran. Most of the passengers were Iranians and Canadians, according to the Ukrainian government.

The Ukrainian jet crash took place about five hours after the missile attacks and Iran was likely on alert for possible retaliation from U.S. forces.

According to Reuters, a U.S. official said that the country's satellites had picked up the launch of two missiles a short time before the plane crash, followed by evidence of an explosion.

The U.S. government believes the downing of the passenger jet was accidental, the report said.

Also Thursday, The New York Times published a video apparently showing a missile hitting the jetliner in the sky near Tehran's airport. It says it verified the authenticity of the video using satellite imagery and flight path data recorded by a flight-tracking website.

"We have intelligence from multiple sources, including our allies and our own intelligence. The evidence indicates that the plane was shot down by an Iranian surface-to-air missile. This may well have been unintentional," Canadian Prime Minister Justin Trudeau told reporters on Thursday.

In a statement, British Prime Minister Boris Johnson similarly said, "There is now a body of information that the flight was shot down by an Iranian Surface to Air Missile."

Asked about the crash, U.S. President Donald Trump told reporters, "Someone could have made a mistake" but did not elaborate.

Iran's aviation authorities said Thursday that the airliner was trying to return to the airport immediately after takeoff due to technical trouble, but went down minutes after takeoff. Witnesses saw the plane catch fire while in the air, they said.

An Iranian aviation official said the plane would have exploded immediately had it been struck by a missile.

Abe to visit Middle East as planned after tensions ease

Ukraine plane crashes in Iran, killing all 176 on board: reports