No visit seen by U.S. envoy for North Korea to Pyongyang from Beijing

Despite speculation that top U.S. envoy for North Korea Stephen Biegun might visit Pyongyang during his trip to Beijing amid stalled nuclear talks, there was no confirmation Friday that such a trip had taken place.

Biegun, who has been recently approved as deputy secretary of state, met with Vice Foreign Minister Le Yucheng earlier in the day and exchanged views on North Korean issues, the Chinese Foreign Ministry said.

China is known as Pyongyang's closest and most influential ally. Biegun was making a two-day trip to Beijing from Thursday, with a year-end deadline set by North Korea for progress in denuclearization negotiations looming.

On Thursday, Biegun agreed with Vice Foreign Minister Luo Zhaohui, who is in charge of Korean Peninsula affairs, that the United States and China will continue communicating on issues related to Pyongyang.

A China visit was not initially included in the released itinerary of Biegun's trip to East Asia. But the U.S. State Department announced Tuesday that he would visit Beijing, as Washington has been seeking resumption of talks with Pyongyang.

He may have decided to stop by Beijing in an attempt to boost cooperation with China to prod North Korea to return to the negotiating table, observers say.

Earlier this week, Biegun also visited Tokyo and Seoul. He is believed to have explored the possibility of meeting with the North Korean side in the inter-Korean truce village of Panmunjeom, but such contact did not materialize. 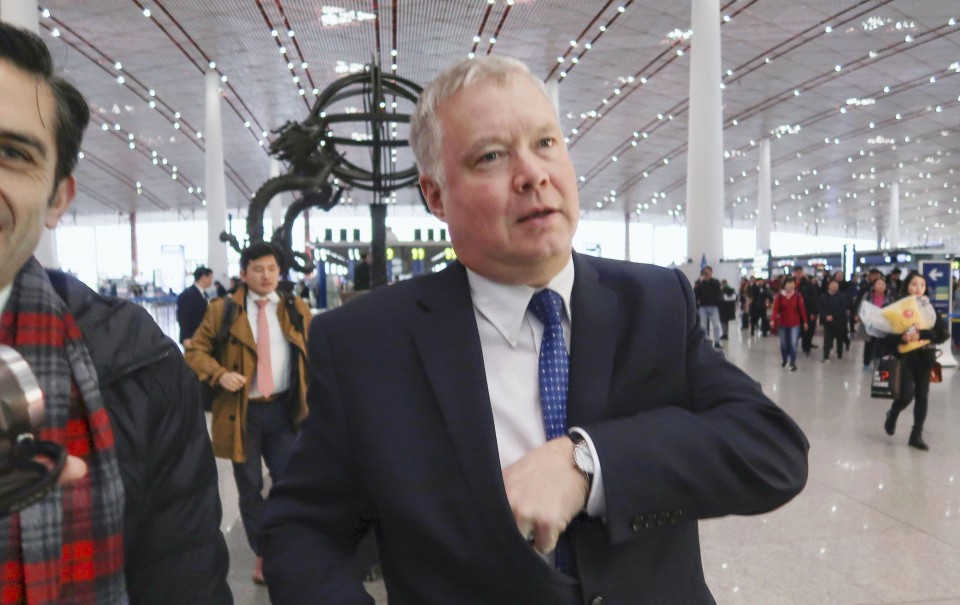 North Korea has been stepping up its provocative rhetoric against the United States, warning that it will restart nuclear and intercontinental ballistic missile tests if talks with Washington fail to achieve a breakthrough by the end of the year.

The United States has been calling on Pyongyang to continue to abide by its commitments to denuclearize and refrain from testing long-range ballistic missiles.

Later this month, North Korea is scheduled to discuss and decide on "crucial issues" at a key ruling party meeting in line with "the changed situation at home and abroad," as it has apparently developed a liquid-fuel engine for a long-range ballistic missile.

U.S. President Donald Trump said in a Twitter post Friday that he has talked with Chinese President Xi Jinping about North Korea, and that "we are working with China."

Trump also said he discussed trade and Hong Kong issues with the Chinese leader. The two countries have recently finalized a partial deal to ease their bruising trade war. Trump tweeted that the "formal signing is being arranged."