Top U.S. envoy for North Korea Stephen Biegun and his Chinese counterpart agreed Thursday that the two countries will continue communicating on North Korean issues, with a year-end deadline set by Pyongyang for progress in denuclearization talks looming.

During their meeting in Beijing, Vice Foreign Minister Luo Zhaohui, who is in charge of Korean Peninsula affairs, also expressed hope that Washington will resume talks with Pyongyang "as soon as possible," according to the Chinese government.

Biegun, who arrived in Beijing earlier in the day, is apparently aiming to bolster cooperation with China to prod the North to return to the negotiating table, pundits say. China is known as North Korea's closest and most influential ally.

But it is uncertain whether the two countries can really join hands over North Korea, given that China has been eager to ease sanctions against Pyongyang, while the United States favors keeping them in place. 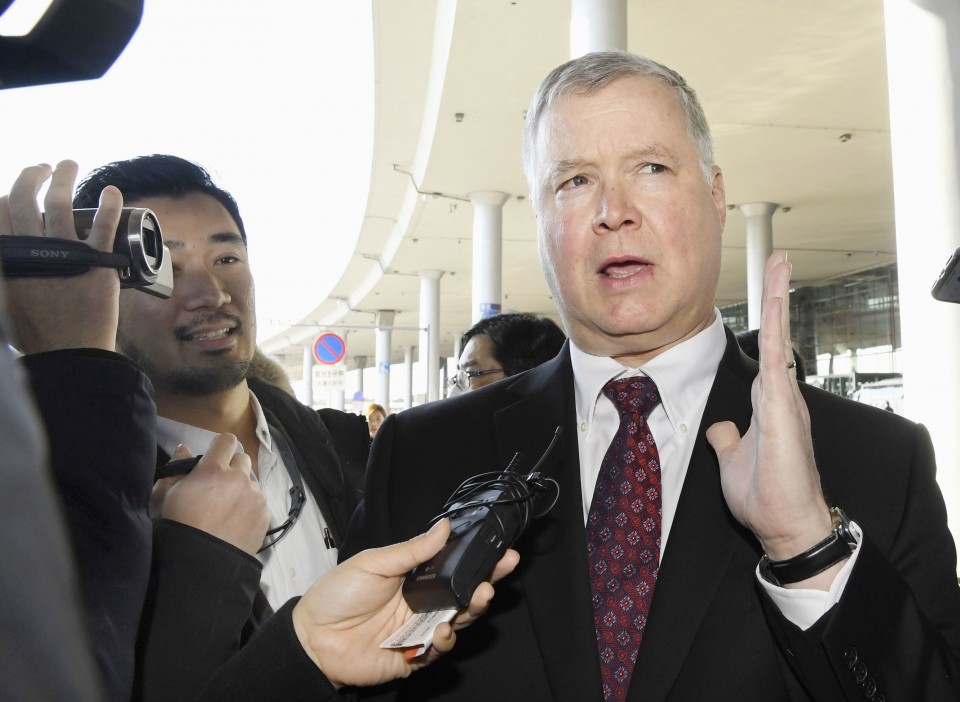 Biegun's trip to China was not initially included in his released itinerary to East Asia. But the U.S. State Department announced Tuesday that he would visit Beijing, as Washington has been seeking resumption of talks with Pyongyang.

The department said in a press release that Biegun would travel to Beijing for two days through Friday to meet with Chinese officials "to discuss the need to maintain international unity on North Korea."

Biegun's five-day trip to Seoul and Tokyo began Sunday. He confirmed with his Japanese and South Korean counterparts that the three nations will work closely together to achieve the denuclearization of the North.

Before holding talks with Biegun, Luo said at a press briefing on Thursday that the situation has become "slightly tense" with U.S.-North Korea negotiations stalled.

Luo also said issues related to the divided peninsula should be resolved "in a political manner" and "through dialogue."

In South Korea, Biegun is believed to have explored the possibility of meeting with the North Korean side in the inter-Korean truce village of Panmunjeom, but such contact did not materialize.

North Korea has been stepping up its provocative rhetoric against the United States, warning that it will restart nuclear and intercontinental ballistic missile tests if talks with Washington fail to achieve a breakthrough by the end of the year.

The United States has been calling on Pyongyang to continue to abide by its commitments to denuclearize and refrain from testing long-range ballistic missiles.

At their first-ever summit in June 2018 in Singapore, U.S. President Donald Trump promised North Korean leader Kim Jong Un that Washington would provide security guarantees to Pyongyang in return for "complete" denuclearization of the Korean Peninsula.

Trump and Kim, however, fell short of bridging the gap between Washington's denuclearization demands and Pyongyang's calls for sanctions relief at their Feb. 27-28 summit in the Vietnamese capital, Hanoi.

China, meanwhile, has recently indicated a willingness to loosen the sanctions, claiming that North Korea has already taken concrete steps toward denuclearization, including the dismantling of a major nuclear test site.

In early October, the United States and North Korea held a working-level meeting in the Swedish capital Stockholm, but it ended without progress. Pyongyang has said the talks broke down as Washington came to the table "empty-handed."