The U.S. military's top officer said Tuesday that South Korea's decision to pull out of an intelligence-sharing pact with Japan is on the agenda of talks he is holding with both countries.

"It'll be a point in discussion there (in South Korea). So we want to try to resolve that issue before it expires," Gen. Mark Milley told reporters after meeting with Prime Minister Shinzo Abe in Tokyo.

On his first overseas trip since becoming chairman of the Joint Chiefs of Staff in October, Milley will visit South Korea on Wednesday.

Milley said he and Abe talked "a little bit" about the General Security of Military Information Agreement, or GSOMIA, which is set to expire on Nov. 23.

The United States has called on South Korea to revisit the decision not to renew the agreement despite it and Japan being involved in a dispute over wartime compensation and trade issues.

Asked if he was optimistic, the highest-ranking U.S. military officer said, "We'll find out, we'll see." 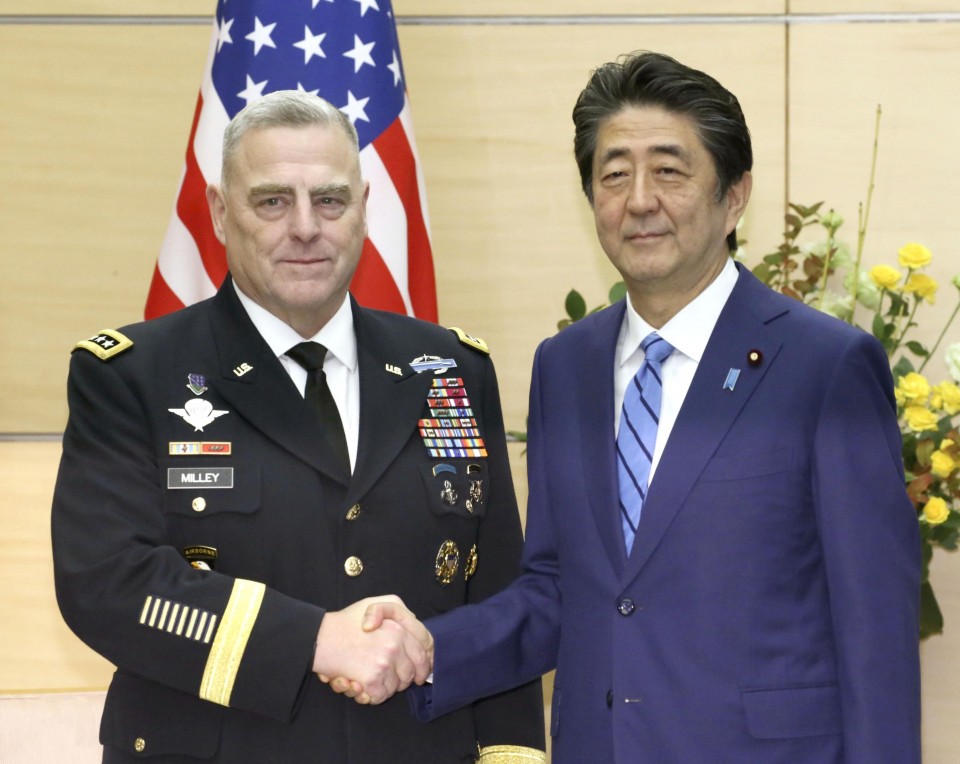 Abe told Milley at the outset of the meeting, "We'd like to enhance our response capabilities and boost deterrence."

Milley said afterward that he and Abe had agreed that North Korea's recent missile launches were a "deep concern."

In a separate meeting with Foreign Minister Toshimitsu Motegi, Milley said the best way to deal with such challenges, including China's growing maritime assertiveness, is to "maintain unity" in cooperation between the United States, Japan and South Korea.

"I'll be heading to the Republic of Korea tomorrow and delivering the same message," he said, using the formal name for South Korea.

North Korea has fired a series of short-range ballistic missiles, but U.S. President Donald Trump has downplayed the significance of the launches while attempting to engage its leader Kim Jong Un in dialogue.

In early October, Pyongyang test-fired what it called a new type of submarine-based ballistic missile that landed in Japan's exclusive economic zone in the Sea of Japan, drawing a protest from Tokyo.