While Moon stressed the need to resolve outstanding bilateral issues through dialogue in what Seoul called a "very friendly and serious" meeting with Abe on Monday in Thailand, the scholars point out there are no signs of concession by either side over the key issue of wartime labor compensation.

"Tokyo-Seoul relations could deteriorate further as neither Abe nor Moon would want to run the risk" of provoking a backlash at home by making compromises, said Yuki Asaba, a professor of Korean politics at Doshisha University in Kyoto.

Asaba also said Moon cannot afford to take a soft attitude toward Japan in light of his declining support ratings ahead of South Korea's general election in April next year.

Asaba and other experts also said the Moon administration is unlikely to change its stance over the wartime compensation issue as it has stressed the need to respect a South Korean court decision based on the principle of the separation of administrative, judicial and legislative powers.

In Monday's 11-minute talks, however, Abe was firm on Tokyo's "basic stance," meaning that the issue of compensation was settled by the 1965 agreement under which Seoul was provided with $500 million in the form of economic cooperation. 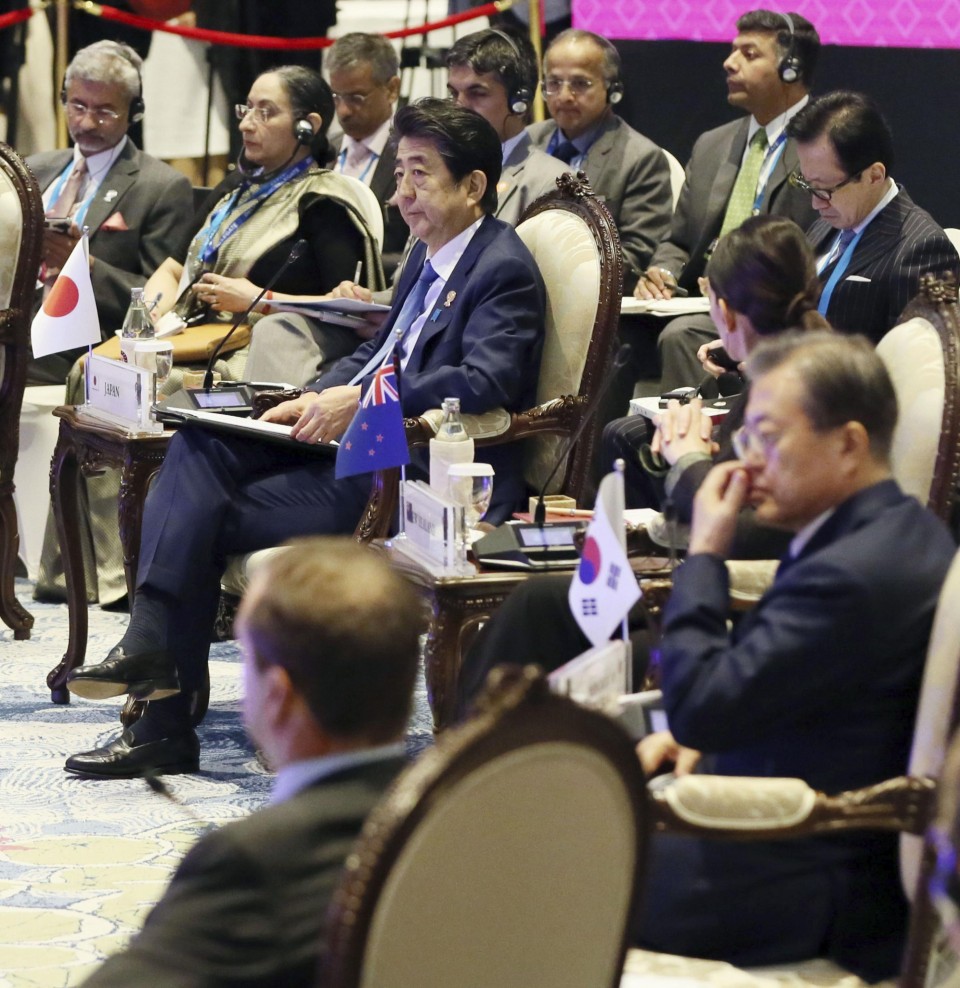 Bilateral ties rapidly soured a year ago when South Korea's Supreme Court ordered a Japanese firm to pay compensation for South Koreans who it judged were forced to work during Japan's colonial rule of the Korean Peninsula between 1910 and 1945.

In the wake of the top court ruling and similar ones, the Japanese government has said South Korea breached international law and urged its neighbor to keep its promises, referring to the 1965 pact.

"Japanese lawmakers and bureaucrats have lost confidence in the Moon administration," said Ryo Sahashi, an associate professor of international relations at the University of Tokyo. "They believe Japan-South Korea ties will not advance without restoring a relationship of trust."

Sahashi said the ball is in Seoul's court, not Tokyo's, in turning around the deteriorated ties.

The Japanese public supports such a view. According to a recent poll by the Nikkei business daily, 69 percent of respondents said Tokyo does not have to rush to improve diplomatic ties with Seoul if it requires making concessions.

Bilateral tensions escalated when Japan imposed stricter export controls on some key materials needed by South Korea's tech industry in July and dropped the country from a list of trusted trade partners the following month. South Korea retaliated by deleting Japan from its own "white list" of trade partners.

The trade spat spilled over onto the security front. Seoul has threatened to terminate a military intelligence-sharing pact with Tokyo, a move that would affect trilateral security cooperation with Washington in the face of North Korea's nuclear and missile development and China's military buildup.

The pact, the General Security of Military Information Agreement, or GSOMIA, is set to expire Nov. 23.

Aside from the possible end of GSOMIA, the next "game changer" is whether seized assets of the Japanese defendant companies in South Korea would be liquidated as demanded by plaintiffs, a move that Sahashi said could mark a "point of no return."

Representatives of the plaintiffs have said the procedure, which is expected to take place within the year, could slip into next year.

Scholars are closely watching whether Abe and Moon will hold another round of talks during a planned trilateral summit with Chinese Premier Li Keqiang in December in Chengdu, southern China, and agree on steps to avoid liquidation of the assets.

Toshiya Takahashi, an associate professor of international relations at Shoin University in Kanagawa Prefecture, south of Tokyo, said the feud between Tokyo and Seoul would benefit Beijing.

"It makes China look like a mediator in the fighting, as if to emphasize its leadership in multilateral settings," Takahashi said.