South Korean National Assembly Speaker Moon Hee Sang said Monday a bill has been crafted that will facilitate the provision of donations to former wartime laborers at Japanese companies.

Moon told reporters in Tokyo the donations will be collected from Japanese and South Korean businesses as well as from individuals from both countries that "have a willingness" to provide funds and that the money will "not be forcibly collected." But he declined to elaborate further.

His comments came as bilateral relations have sunk to the worst level in years due to a row over compensation for wartime labor. Moon was visiting Japan for Monday's meeting of Group of 20 parliament speakers in Tokyo. 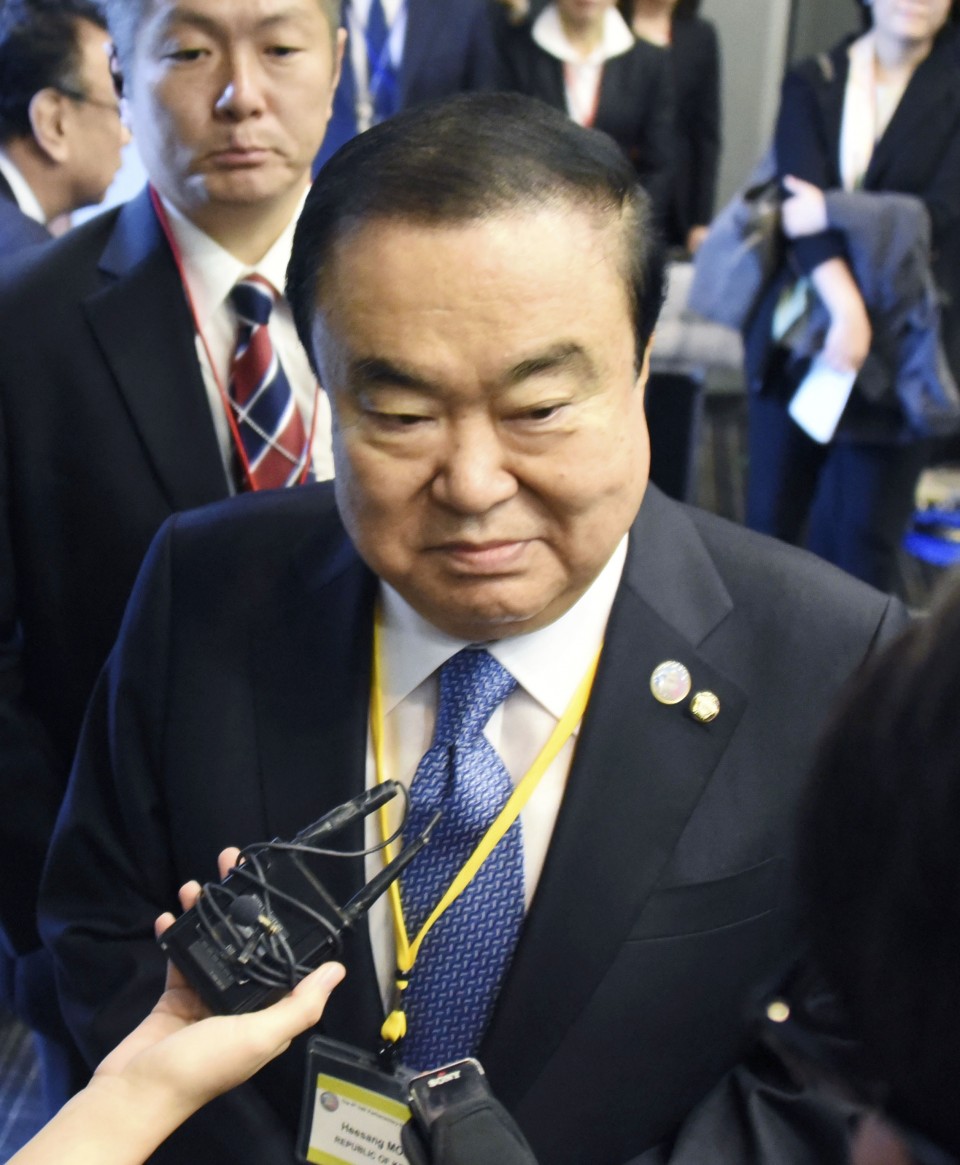 The neighbors have failed to make progress in resolving the issue since a series of South Korean court rulings ordered Japanese companies last year to compensate for wartime forced labor during Japan's 1910-1945 colonial rule of the Korean Peninsula.

With South Korean plaintiffs demanding compensation and apologies from Japanese companies, which were the defendants in the suits, it remains uncertain whether the bill could gain public support in the country.

The plaintiffs have seized assets in South Korea of Nippon Steel Corp. and other Japanese companies following the rulings, and procedures for their sale are underway.

In June, South Korea suggested that companies from the two countries chip in funds to compensate victims, but the plan was immediately rejected by Japanese Prime Minister Shinzo Abe's government.

The wartime labor dispute has impacted trade and security arrangements between the countries in recent months.

Japan claims the issue of compensation was settled when the countries established ties under a 1965 agreement, with Tokyo providing $500 million to Seoul for "economic cooperation."

In February, Moon drew criticism from Japan for saying an apology from then Emperor Akihito would resolve a long-standing dispute over the issue of so-called comfort women who were forced to work in Japanese wartime military brothels.

"It only takes one word from the prime minister, who represents Japan -- I wish the emperor would do it since he will step down soon," Moon was quoted as saying in an interview with Bloomberg. "Isn't he the son of the main culprit of war crimes?"

The comments were made ahead of the April 30 abdication of Emperor Akihito, ending his three decades on the throne. He is the eldest son of wartime Emperor Hirohito, posthumously known as Emperor Showa.

Akiko Santo, the head of Japan's upper house, decided not to hold one-on-one talks with Moon on the sidelines of the G-20 meeting as she received no response after asking him in a letter to retract his comments on the emperor, according to parliamentary sources.