Hong Kong police on Friday ended their 13-day siege of a local university, after finding no protesters there during two days of intensive searches inside the campus for anyone who could still be holed up.

Hundreds of police officers and firemen concluded their search at Hong Kong Polytechnic University in Kowloon before noon. The police, nonetheless, managed to retrieve a slew of weapons purportedly made or brought in by protesters who had occupied the campus for days earlier this month. 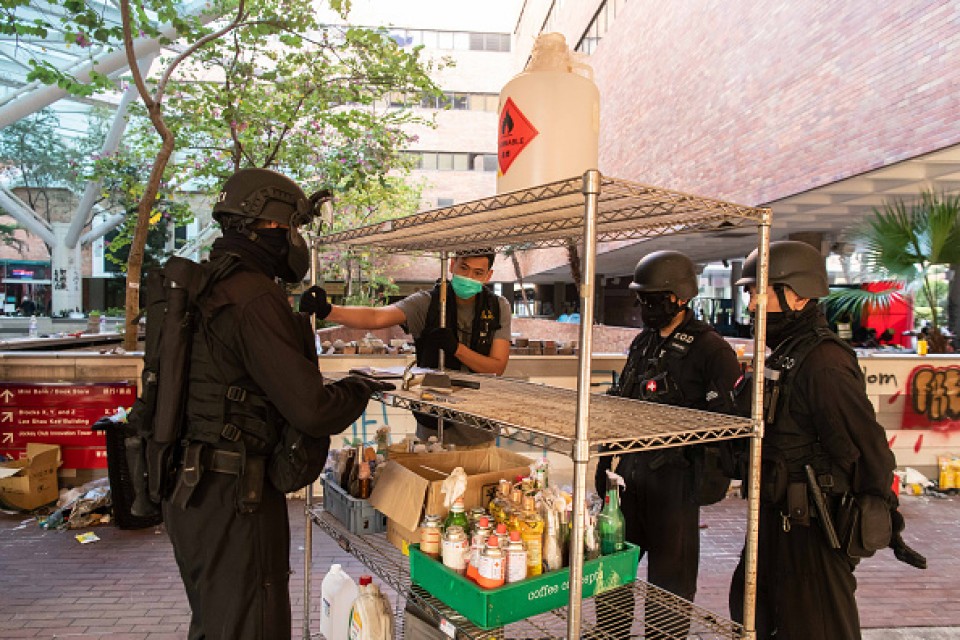 (Hong Kong police officers inspect and catalogue thousands of molotov cocktails collected on the campus of the Hong Kong Polytechnic University in the Hung Hom district on Nov. 28, 2019.)[Getty/Kyodo]

"The police would like to reiterate that we will not tolerate any kind of violence...or illegal activities, and we will stringently follow up the investigation in a professional and impartial manner," assistant police commissioner Chow Yat-ming told reporters outside the campus.

Hundreds of anti-government protesters occupied the university earlier this month, closing down the nearby thoroughfare, one of Hong Kong's major arteries that connect to Hong Kong Island.

They clashed with police around the campus most fiercely on Nov. 17, as they threw bricks and firebombs, and shot arrows at police that were closing in. The police fired tear gas and deployed water cannons and armored vehicles during the violence, which lasted through the night.

The police then cordoned off the area and arrested hundreds of protesters who tried to flee or surrendered for alleged "rioting," while those who were injured or ill were sent to hospitals for treatment.

The police say that in the aftermath, they found around 4,000 firebombs, 1,300 gas canisters, and hundreds of liters of corrosive liquid. Among the other items discovered were flammable liquid, bomb-making materials, 27 bows and 200 arrows, an air pistol and some tire-piercing spikes. They also found 44 damaged vehicles.

An earlier search by university staff found one woman who had refused to leave the campus. 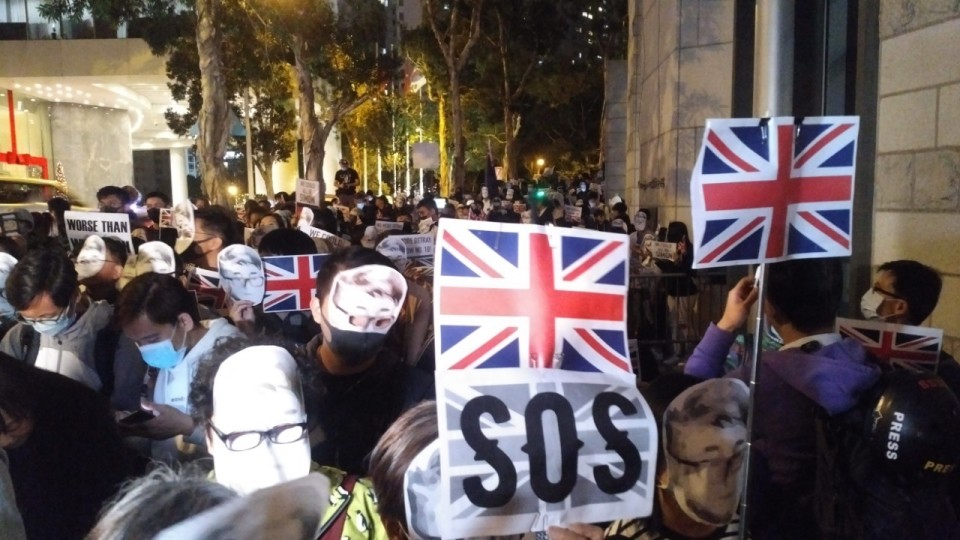 (Protesters rally on Nov. 29, 2019 at the British consulate general office in Hong Kong, petitioning for London's help for former staff Simon Cheng who had been detained by China and for granting Hong Kong people right of abode in Britain.)

A male protester had told reporters late Wednesday that he and some 20 others remaining on campus would not surrender. It is unclear whether they have since left or remain somewhere on campus.

"We didn't find anyone. We didn't encounter anyone. No arrests," Chow said Friday. "Our operation objectives are twofold...It's all about the dangerous items and (evidence-collecting at the) scene of the crime."

A total of 1,377 people have surrendered or been arrested near the campus, in addition to 318 minors, police figures showed.

University President Teng Jin-guang said after touring the campus that only 46 of the arrested were university students.

"No matter one's political stance and view, we should resort to peaceful discussion and rational dialogue to solve our differences," Teng told reporters. "Just like we have done today, solving the problem peacefully."

Meanwhile, hundreds of people gathered at the British Consulate General in Hong Kong late Friday, calling for Britain's protection of its former employee Simon Cheng, who was detained in China on a working trip in August, allegedly for soliciting prostitution. They are also calling for the protection of all British citizens and British National (Overseas) passport holders in the territory.

"We could all be Simon," one of the supporters said. "The U.K. government must provide assurance to British National Overseas by extending citizenship before we all become political refugees."

Hong Kong people born before the former British colony returned to Chinese rule in 1997 were entitled to apply for the British National (Overseas) passport, which does not provide the right of abode in Britain. Only a small portion of the three million eligible applicants have applied for it.

In a statement posted last week on his Facebook account, Cheng, who has been in hiding since being released in late August from a 15-day administrative detention in mainland China, wrote about his torture by interrogators, who wanted to extract information from him about Hong Kong protesters and to build a case on the British government's role in the "riots."

He wrote that he had come across about 10 detainees at an interrogation center, who he believed were Hong Kong protesters. He was also forced to confess, on tape, to soliciting prostitution before being let go.

Cheng also said in the post that he was asked to resign from his consulate position and that he is now seeking asylum in Britain.

Mass protests began in Hong Kong in June over a now-withdrawn bill that sought to allow extraditions to mainland China. The protests increasingly turned violent in the ensuing months, resulting in frequent clashes with the police.

Some 5,890 people, aged between 11 and 83, have been arrested for a range of crimes including unlawful assembly, possession of weapons and rioting, throughout the movement since June, while more than 2,600 people have been injured in the unrest, including 470 police officers.

The protests have presented the Beijing-backed Hong Kong government with its biggest challenge yet since the former British colony's handover to China in 1997.

Protesters' demands, meanwhile, have expanded to include police accountability and greater democracy.