Pro-democracy parties pulled off a landslide victory in Sunday's district council elections in Hong Kong, local media reported Monday, the clearest sign yet that voters support the protests against the Beijing-backed government that have rocked the Chinese territory for almost six months.

Democracy-supporting candidates took 385 of the 452 directly elected seats -- or 85 percent -- seizing a majority for the first time since the former British colony was returned to Chinese rule in 1997, according to local media outlets.

In what was also the first electoral contest since mass pro-democracy demonstrations began in June, the pro-establishment bloc won just 59 seats, a far cry from the 298 it currently holds.

Official figures showed a record 71.2 percent of the 4.1 million eligible voters turned out in Sunday's elections, double the roughly 1.47 million who voted in the previous elections. 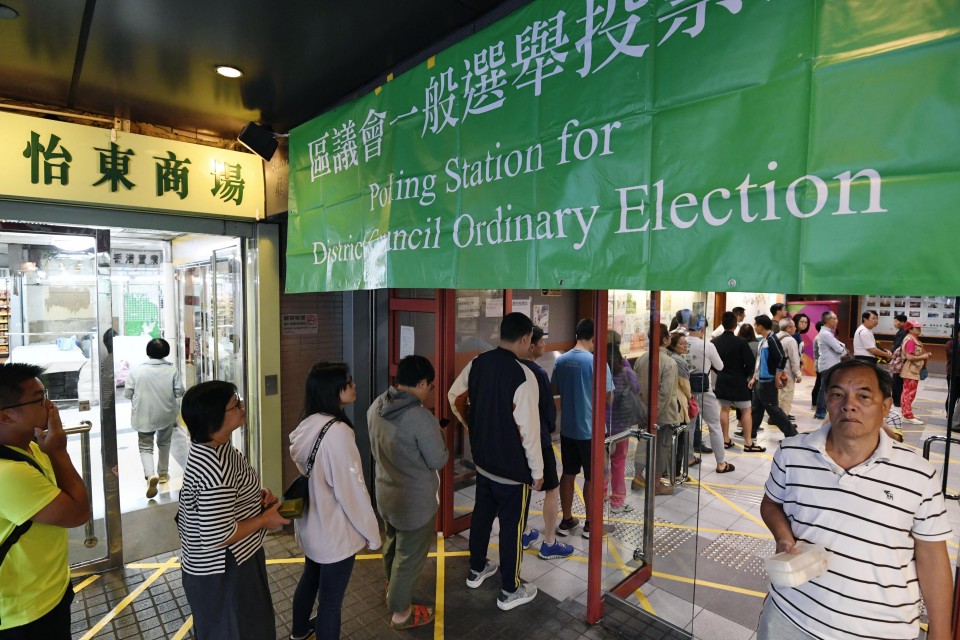 While district councils perform limited functions and lack the power to make laws, many viewed the elections as a referendum on Chief Executive Carrie Lam's leadership amid months of increasingly violent protests that her police force has battled with tear gas and other tactics.

"This is a genuine referendum for Hong Kong that shows an explosion of public opinion following six months of (social unrest)," said Lee Wing-tat, former head of the pro-democracy Democratic Party, which won 91 seats and has become the party with most seats in the territory's 18 councils.

"Three million voters have spoken clearly," said Alan Leong, whose Civic Party won 32 seats to become the second-biggest winner in the elections. "The government must respond to Hong Kong people, who used their votes to cut ties with tyranny."

Lam said in a statement on Monday that the government respects the election results and views them as reflecting the people's dissatisfaction with the current situation in Hong Kong. 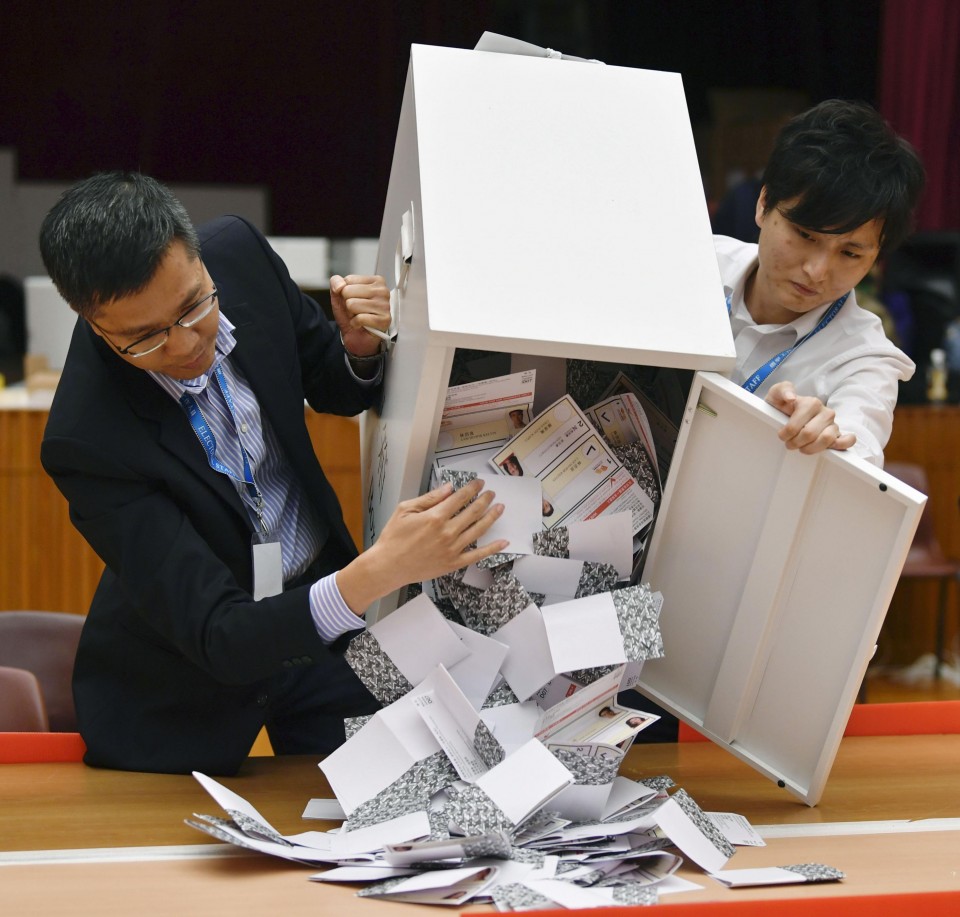 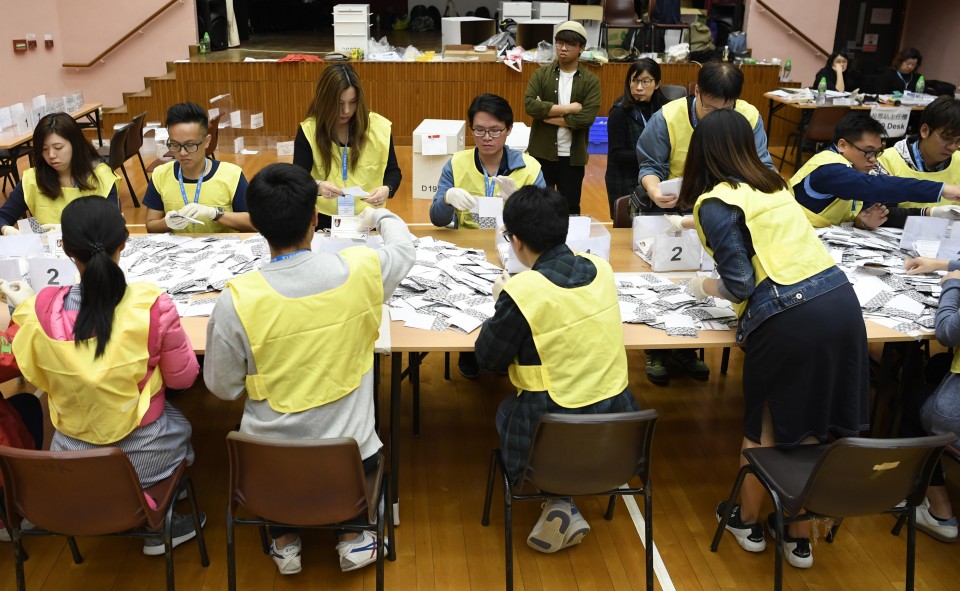 The biggest pro-Beijing party, the Democratic Alliance for the Betterment and Progress of Hong Kong that held the most 119 seats in the incumbent council term, ended up the biggest loser with 21 seats won in the elections.

"The DAB has suffered a great defeat in the elections," group chairwoman Starry Lee said. "We will stay united and work hard...to rebuild a harmonious environment in Hong Kong."

"The young voters believe in their 'five demands,' but I don't. I only agree to one," the losing moderate pro-establishment council member Michael Tien said. "That's the price to pay for upholding my belief."

Alice Mak of the Federation of Trade Unions, who also lost, blamed the government's mismanagement for the defeat handed to the pro-establishment camp.

"Society embraces a political stance more than district work, which is not favorable to (those) in the pro-establishment camp who have worked hard in the community," she said.

The Civil Human Rights Front, a group that has organized some pro-democracy demonstrations, said the elections have shown that people do not accept Lam's government continuing to ignore protesters' five demands.

The group indicated that mass protests will continue.

Pro-democracy campaigner Jimmy Sham, the group's leader who also won in his maiden run, credited the success of pro-democracy candidates with the broader anti-government protests. 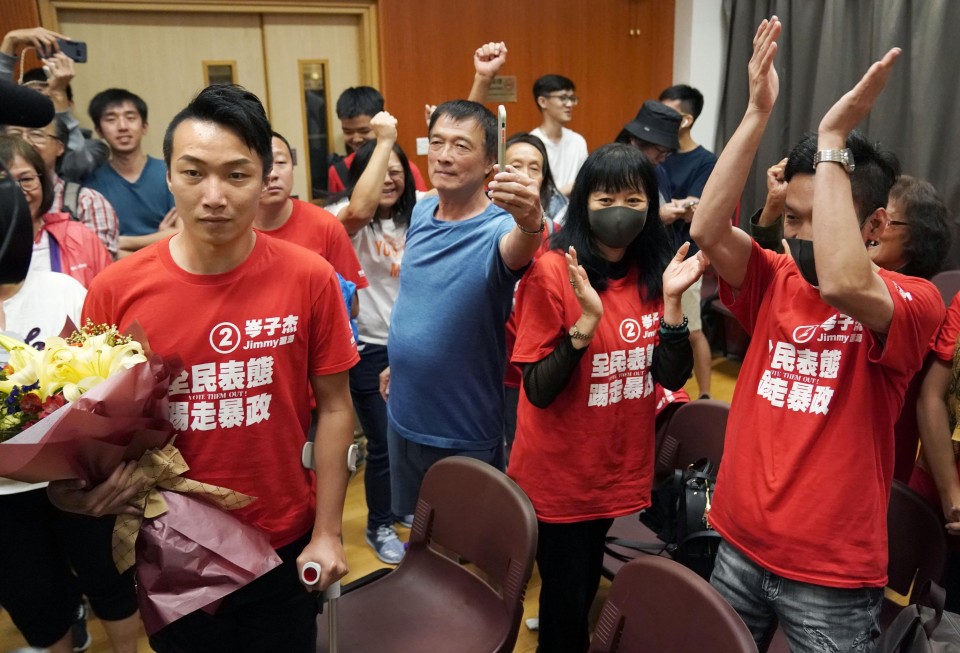 "We won because of the movement, which has turned the district elections into a referendum," he said. "This is a win not for me, but for all Hong Kong people."

Chinese Foreign Minister Wang Yi, speaking to reporters during his visit to Tokyo on Monday, said Hong Kong is a part of China "no matter what happens."

"Any attempt to destabilize Hong Kong or to undermine Hong Kong's prosperity and stability is doomed to failure," he said.

In Beijing, Chinese Foreign Ministry spokesman Geng Shuang affirmed the central government's support for Lam regardless of the election results and stressed its commitment to the principle of "one country, two systems."

"The most urgent tasks for Hong Kong at present are to stop violence, control chaos and restore order," Geng said at a regular press briefing.

Just over 1,000 candidates stood for the 452 seats contested across 18 district councils.

Aside from a lingering standoff between protesters and police at a university in Kowloon, voting took place without major incidents and no anti-government demonstrations were reported in the city on Sunday.

The protests, sparked by a now-withdrawn bill that sought to allow extraditions to mainland China, have resulted in many arrests, widespread vandalism, numerous injuries, and even deaths, plunging the city into a serious political crisis and economic recession.

District councils are Hong Kong's most democratic body, with all but 27 out of the 479 representatives directly elected, compared with the legislature in which just half are.

District councils advise the government on policies and help build political support for the government. While councilors cannot make laws or policy decisions, they make up 117 of the 1,200-member election committee that picks the semi-autonomous city's chief executive.

In the last district council elections in 2015, which followed the 2014 "Umbrella Movement" protest that called for democratic electoral reforms, a then-record 47 percent of the 3.12 million eligible voters cast their ballots. Pro-democracy parties made gains and nabbed some 100 seats, but fell far short of a majority, with the pro-establishment camp winning 298.

Since its return to Chinese rule in 1997, Hong Kong has been governed under a "one country, two systems" arrangement that is set to expire in 2047.