Police led a team into Hong Kong Polytechnic University early Thursday to sweep the besieged campus, where about 20 anti-government protesters are believed to still be hiding out after almost two weeks.

Although some 1,100 protesters who were on the campus when a daylong clash with police took place on Nov. 17 have since then surrendered, those staying behind have vowed not to do so. 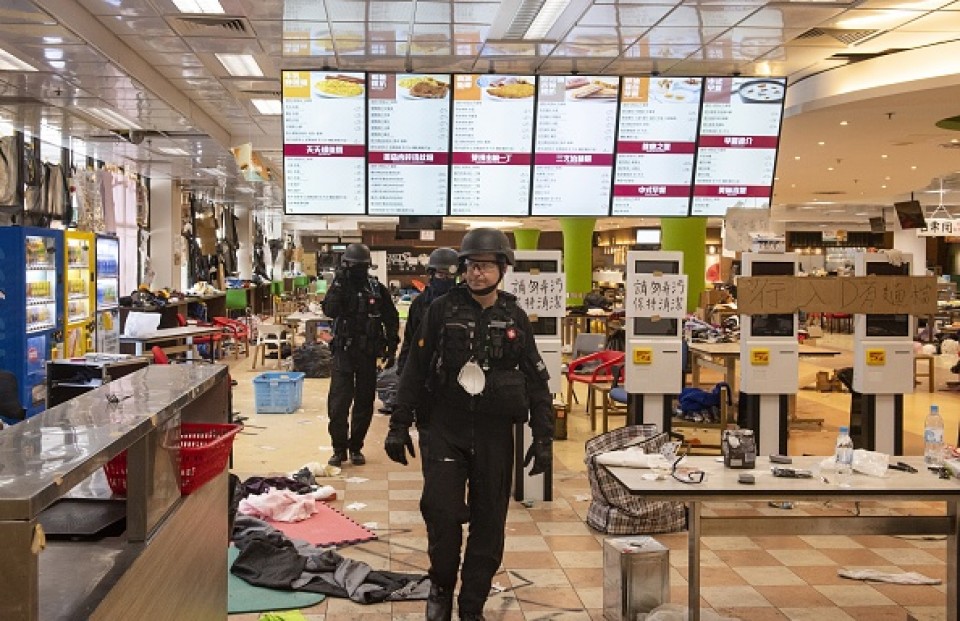 (Hong Kong Explosive Ordnance Disposal Bureau officers search the campus of the Hong Kong Polytechnic University after 10 days since the siege by anti-government protesters began at the Hung Hom campus to remove hazardous items such as petrol bombs and restore safety in Hong Kong on Nov. 28, 2019.)[Anadolu Agency/Getty/Kyodo]

About 400 police officers, including crime investigators, a bomb squad and mediators, entered the locked-down campus along with firemen and psychiatrists in the early morning, but encountered no protesters.

The police said they found some 3,800 gas bombs, along with other gas canisters, corrosive chemicals and flammable liquids from within the campus, also 27 bows and 200 arrows and an air pistol, while 44 cars were damaged.

They said will continue their operation Friday and could wrap it up within the day.

"We have two objectives. The first one is to handle all the dangerous items and offensive weapons, and the second is to gather all the evidence at the crime scene," assistant police commissioner Chow Yat-sing told reporters after the search operation.

He earlier in the day said, "We do not aim to make arrests."

In two days of searching the campus that ended Wednesday, university staff only managed to find one protester, a woman who refused to leave.

A male protester, with his face fully covered, told reporters late Wednesday that they have not done anything wrong and urged police to end the siege and let them off.

"We would leave if police do," said the man identifying himself only as Bong, adding that police entering the campus might meet with resistance.

Protesters clashed with police in the vicinity of the campus most fiercely on Nov. 17, as they threw bricks and firebombs and shot arrows at police closing in, while police fired tear gas and deployed water cannon and armored vehicles as the violence lasted through the night.

Police then cordoned off the area and demanded protesters surrender themselves to be arrested for "rioting."

Rallies have been staged almost daily in different times at various districts in support of those who remain on the campus, but the police insist they will not back down.

He said it is a pity that the police's hard-earned reputation was tarnished by the way they handled the monthslong demonstrations. He was also hopeful that U.S. President Donald Trump's signing into law a human rights act in support of Hong Kong's movement will draw attention to the local struggle against oppression.

"It's hard to guess at which point changes will come. But Hong Kong people are unlikely to budge, so maybe the Hong Kong authorities or Chinese government will," Choy said.

Prominent young activist Joshua Wong said the U.S. Human Rights and Democracy Act was significant as it was the first Hong Kong-related law enacted by the United States since the former British colony was returned to Chinese rule in 1997.

Trump on the same day approved another bill prohibiting the export of tear gas and certain other munitions to Hong Kong police.

Wong told reporters that the signing of the acts "sends a signal to (Chinese) President Xi Jinping."

"Now it's time for them to reconsider their hardline policy, (to) deescalate the situation (and) investigate on police brutality," he said. "I just hope...we can develop the sanction mechanism around the world, not only in United States, but also in United Kingdom, France, Italy, Germany...etc."

"Even Nancy Pelosi, speaker of the House, I just can't imagine how could someone of her seniority on the matter as important as this could have said on record that Hong Kong should have been given full autonomy and China denied it," Leung told the Foreign Correspondents' Club in Hong Kong.

He stressed that Hong Kong has a high degree of autonomy but not full autonomy.

Sunny Cheung, organizer of a U.S. Thanksgiving rally in the evening, said its participants hope the U.S. administration will impose sanctions on Hong Kong's oppressive officials, pro-Beijing legislators and police management as soon as possible.

"Our first objective is for the U.S. to expedite sanction on the officials and also to showcase the U.S. acts for other countries, and hopefully they will enact relevant laws," Cheung said.