Japan's dependence on U.S. nuclear deterrence is "realistic and appropriate," the government's top spokesman said Monday, countering an earlier call from Pope Francis for Tokyo to support the elimination of nuclear weapons.

During visits Sunday to Nagasaki and Hiroshima, the two Japanese cities hit with atomic bombs during World War II, the pope said a world free of nuclear weapons is "possible and necessary" but collective efforts are needed to realize it.

He became the first pontiff to travel to Japan in nearly four decades.

"For our country's defense, it's realistic and appropriate to maintain and strengthen the U.S. deterrence under the Japan-U.S. security architecture, with Japan also beefing up its own defense capabilities," Chief Cabinet Secretary Yoshihide Suga said at a press conference. 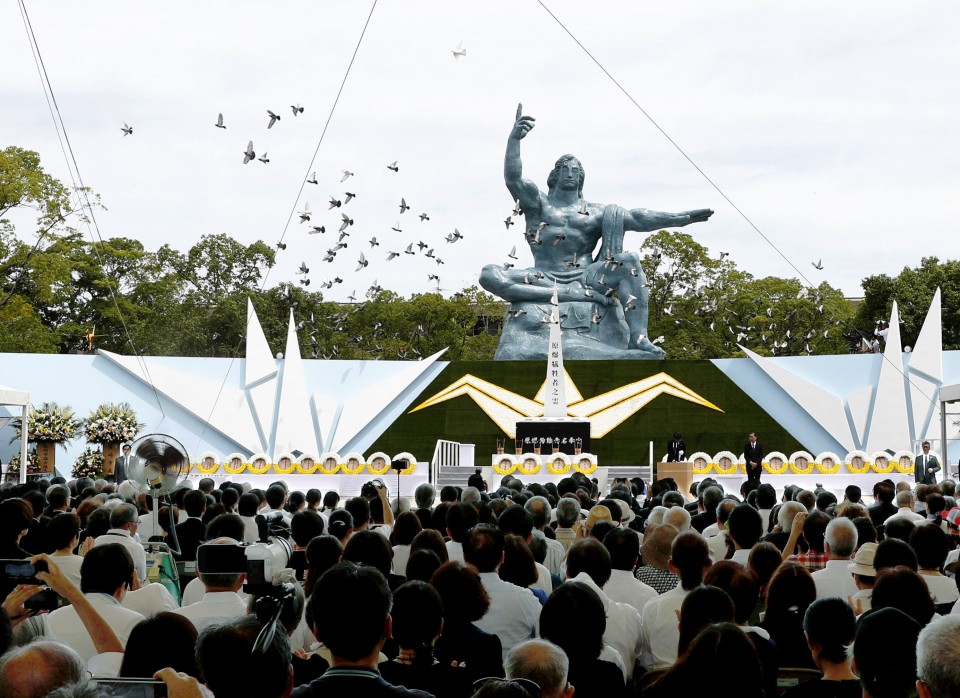 (People attend a ceremony marking the 74th anniversary of the U.S. atomic bombing of Nagasaki, held in front of the Peace Statue at Peace Park in the southwestern Japan city on Aug. 9, 2019.)

"It's important that the pope, who pursues global peace, visited the atomic-bombed cities of Nagasaki and Hiroshima and delivered his speeches from the viewpoint of accurately conveying to the international community the realities of the atomic bombings," Suga said.

Japan does not possess nuclear weapons but sits under the protective nuclear umbrella of its key ally the United States.

Although Tokyo has not signed a U.N. treaty banning nuclear weapons adopted in 2017 on the grounds that it does not reflect the reality of the security environment, Suga said Japan has a mission to lead global efforts to rid the world of nuclear weapons and seek a path toward global nuclear disarmament.

Installed as the Roman Catholic pontiff in 2013, Pope Francis is known as a vocal opponent of nuclear weapons and has condemned not only their use but also their possession. In Hiroshima, the pope called the use of atomic weapons in war "immoral."

The pope's visit comes amid growing fears of an arms race after the United States withdrew from a Cold War-era nuclear arms control pact with Russia known as the Intermediate-Range Nuclear Forces Treaty.

Among Japan's neighbors, China is a major nuclear power and North Korea has not given up on its nuclear and missile development.

Pope Francis prays for victims of 2011 quake in northeastern Japan