In becoming the first pontiff in 38 years to visit Nagasaki and Hiroshima, the only cities in the world to have suffered atomic bombings, Pope Francis was keen to press his strongly held desire for a world without nuclear arms.

With a stalemate in efforts to prod major powers toward nuclear disarmament and international arms control frameworks under strain, the pope's trip Sunday to the two cities was a measure of his concern about the possibility of a new nuclear arms race, experts say. 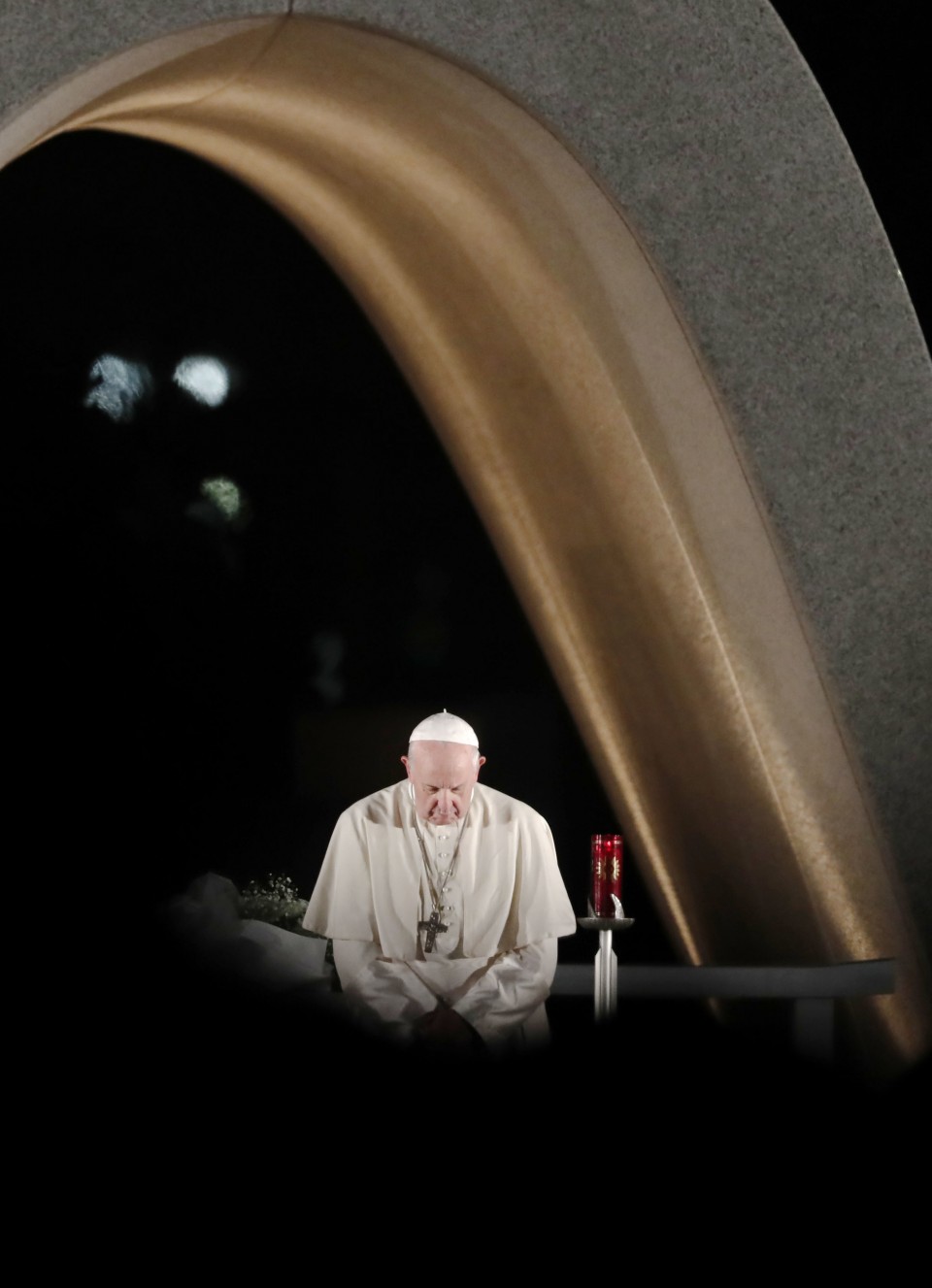 Enthusiastically welcomed by people in Japan -- a country with fewer than 450,000 Catholics -- the pope stressed that true peace can only be an "unarmed peace," urging political leaders to "ponder the catastrophic impact of their deployment."

The 82-year-old Argentine, known as a staunch opponent of nuclear weapons, has shown strong interest in Hiroshima and Nagasaki, saying mankind "has learned nothing" from the history of the cities.

In one symbolic episode, the pope issued cards in January last year showing a picture of a boy carrying his dead brother on his shoulders in Nagasaki after the 1945 A-bomb attack, with the words "the fruit of war."

Shigeru Tokuyasu, a former diplomat who served as the Japanese minister to the Vatican for two years to March 2015, said the pope would not have come to Japan unless he felt a deep concern about nuclear weapons.

With popes heading a church with about 1.3 billion believers across the world, the Vatican has played an important role in pushing for world peace.

Tokuyasu, for instance, cited the role then Pope John Paul II played at the end of the Cold War in offering support for the democratization movement in the 1980s in his Communist homeland of Poland, where Catholics accounted for a majority of the population.

"It's impossible to verify to what extent his efforts were influential, but we can say, at least, that his support generated a big wave of democratization, which led to the fall of the Berlin Wall in 1989 and also the collapse of the Soviet Union in 1991," Tokuyasu said.

Pope Francis has already established his diplomatic clout since his election in March 2013, the former diplomat said, citing the restoration of U.S.-Cuba diplomatic relations in 2015 as a "significant result" for the pontiff.

The pope was reported to have personally sent letters in 2014 to then-U.S. President Barack Obama and Cuban leader Raul Castro in an effort to mediate between the two countries.

"Through observing the pope's actions, we can see that he anticipates the next move by using the Vatican's high intelligence capability, to be prepared to move as a bona fide mediator whenever he is needed," Tokuyasu said.

"The most fearful thing is that miscalculations and misperceptions (that can bring about wars) can always happen even when it comes to the nuclear weapon issue," he said.

Tokuyasu also noted the timing of the trip, saying the Holy See is worried about expanding defense budgets that "could jeopardize not only nuclear arms disarmament but also controls on these weapons." 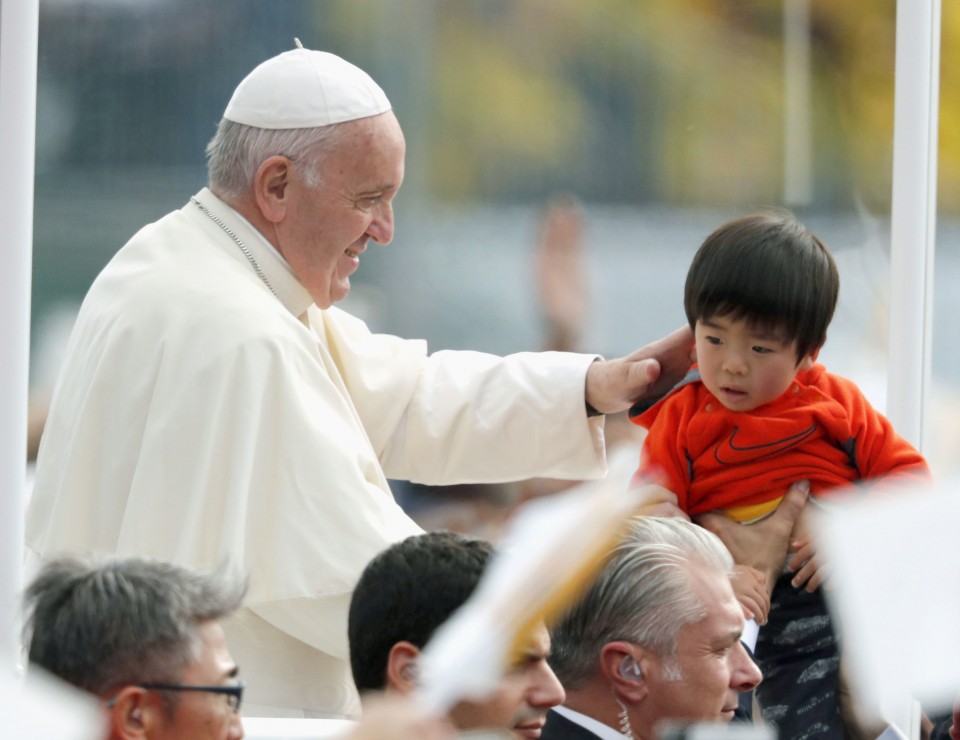 Concerns over a possible nuclear arms race, potentially involving the United States, Russia and China, were stoked when the United States formally withdrew in August from the Intermediate-Range Nuclear Forces Treaty signed with Russia in 1987.

Mitsuru Kurosawa, a professor emeritus at Osaka University, said the next development "depends on the U.S. attitude."

"If Washington starts a massive increase of INFs (intermediate range nuclear forces) and a large-scale missile defense deployment in outer space in line with its 'Nuclear Posture Review' nuclear policy guideline, Moscow and Beijing will, of course, strengthen their nuclear forces to counter this," said Kurosawa, now a professor at Osaka Jogakuin University.

Meanwhile, nations are scheduled to hold a meeting next spring to review the Nuclear Non-Proliferation Treaty after the previous NPT review conference in 2015 fell apart without agreement.

Kurosawa, who is well-versed in disarmament issues, said the possibility of governments adopting consensus documents containing measures toward nuclear disarmament during the next meeting is "almost zero," although denying such a failure would mean the collapse of the NPT.

A move to ban nuclear arms -- The Treaty on the Prohibition of Nuclear Weapons, which the Holy See signed quickly -- was passed at the United Nations in July 2017 with the support of 122 nations, but it has yet to take effect since it has not been ratified by the required 50 states.

At the atomic bombing anniversary ceremonies in Hiroshima and Nagasaki in August, Japanese Prime Minister Shinzo Abe pledged that Tokyo would continue to aim to be a "bridge" or "mediator" between nuclear weapon states and non-nuclear weapon states, but he did not refer to the treaty.

Kurosawa said it will be impossible for Japan to become a "neutral bridge builder" as long as it remains standing close beside the United States.

"Japan should decide the direction of its policies under the U.S. nuclear umbrella after further discussion as to whether the nuclear deterrence is in fact effective," he said. "It should aim at reducing the role of nuclear arms in its security policies."

Kurosawa's comments reflect the pope's criticism of the concept of nuclear deterrence and his concern about risks leading to a dismantling of the international arms control framework.

"How can we propose peace if we constantly invoke the threat of nuclear war as a legitimate recourse for the resolution of conflicts?" the pope said Sunday in Hiroshima.