Japanese sake pours into China amid shrinking consumption back home

Japanese sake sellers are looking to tap into China's growing taste for Japanese traditional rice wine to counter its falling consumption back home.

Fueled by an increasing number of Japanese restaurants and rising Chinese household incomes, sake, while still considered a treat, can now be found in many restaurants and department stores in major Chinese cities like Shanghai and Beijing.

At the second China International Import Expo taking place in Shanghai this week, more than 110 Japanese firms have gathered to promote Japanese food and agricultural products including sake.

On the first day the expo opened to buyers, Japanese stalls were crowded with potential clients looking to get a shot glass-sized sampling of sake or a mouthful of Japan-grown rice. 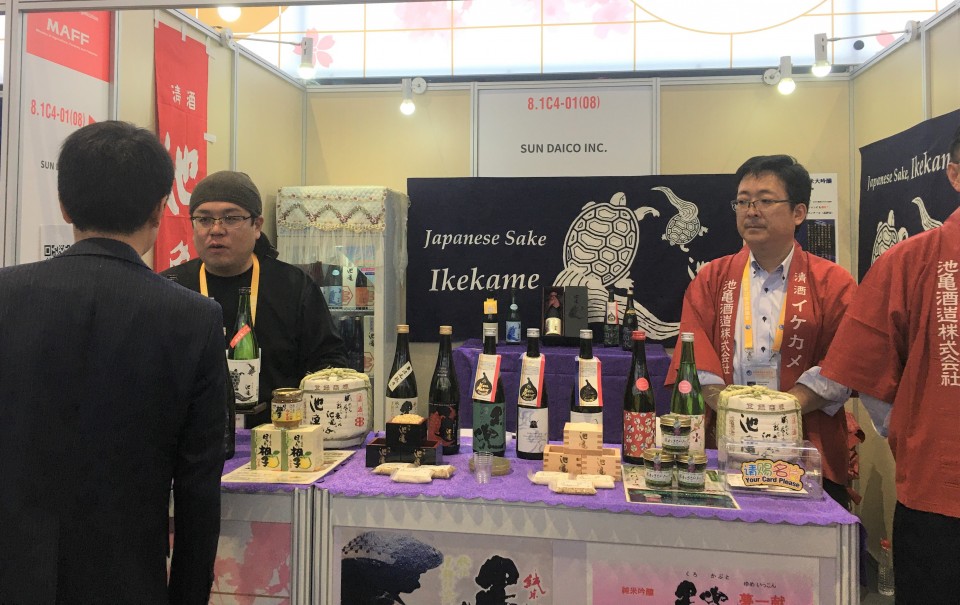 Other Japanese liquor vendors at the fair echoed Oishi's enthusiasm for the potential of the rice-based wine in the Chinese market.

Overall sake exports have tripled in the past decade to reach a record 22.2 billion yen (about $204 million) in 2018, according to trade data compiled by the Japan Sake and Shochu Makers Association.

Exports to China, ranked third after the United States and South Korea, reached 3.6 billion yen in 2018, up 24 percent in volume from the previous year, making it the fastest growing market for sake exports.

This is despite China's ban on food imports from Japan's 10 prefectures including famous sake-producing areas like Niigata and Nagano prefectures. The ban was introduced after the 2011 Fukushima nuclear disaster over concerns regarding radioactive contamination.

"One factor for our growth is that we didn't have much business in China to begin with. But another is that since Japanese food became a part of UNESCO World Heritage, Japanese restaurants have increased abroad, which has pushed sales of sake," explained Oishi.

Another factor in the growing popularity of Japanese alcoholic drinks is the increasing number of Chinese people who travel to Japan each year, reported a staffer at a booth for sake giant Ozeki Co.

Once familiarized with sake during their visit, people are more likely to order the drink at Japanese restaurants in China, the staffer explained. Ozeki returned to the expo for the second time after receiving a good response last year, he said.

Demand for alcoholic beverages including the more pricey imported labels is rising thanks to the growing middle class in China.

Meanwhile, sake consumption in Japan is falling. In 2017, consumption was a third of what it was at its peak in 1973, according to the National Tax Agency.

While the declining population is partially to blame, sake sellers point to the younger generation's lower consumption of alcohol. In 2016, those in their 20s drank much less than their parents' generation, with only 14.5 percent of men and 6.5 percent of women saying they drank regularly.

"However, fruit liqueurs like umeshu remain popular in Japan and are expanding in China," said Oishi, adding that his company sells more yuzu citrus- and plum-flavored liqueurs than sake in China.

The Ozeki staffer explained that "while sake can be an acquired taste, fruit-based liqueurs can be enjoyed by everyone and are very popular among women regardless of nationality."

But some buyers have complained that sake and fruit liqueurs, which have an alcoholic content of around 15 percent, are not strong enough, a man from a Japanese sake trading company said. The traditional Chinese spirit known as baijiu contains up to 50 percent alcohol.

Others have found the higher price points of sake harder to sell on shelves as "a 2,000 yen bottle of sake becomes 5,000 yen in China."

Because of this, the sake sellers explained, the majority of their sales to China will for the time being remain focused on Japanese restaurants and bars.