Barber and beauty-care providers have started making visits to people's homes and nursing-care facilities as they adapt their services to the demands of Japan's rapidly aging society.

As elderly regular customers tail off their visits to beauty salons, businesses are taking their full range of services, including hair perms and massage options, to them -- even using aromatherapy to create a salon-type atmosphere at their "pop-up shops."

Masueko Imai, 86, a resident of a nursing home for the aged in Tokyo's Setagaya Ward, recently got a haircut and set from a beautician who visited the facility. The room that served as a salon was filled with 1960s Western-style music, setting the stage for the creation of her chic hairdo.

"My hair is gray now, but when I was young I dyed it bright red," said Imai, who returned to her room a satisfied customer after checking out the beautician's handiwork in a mirror.

The service is provided by Trip Salon Un, a Tokyo-based company dispatching hair stylists to private homes and other facilities. 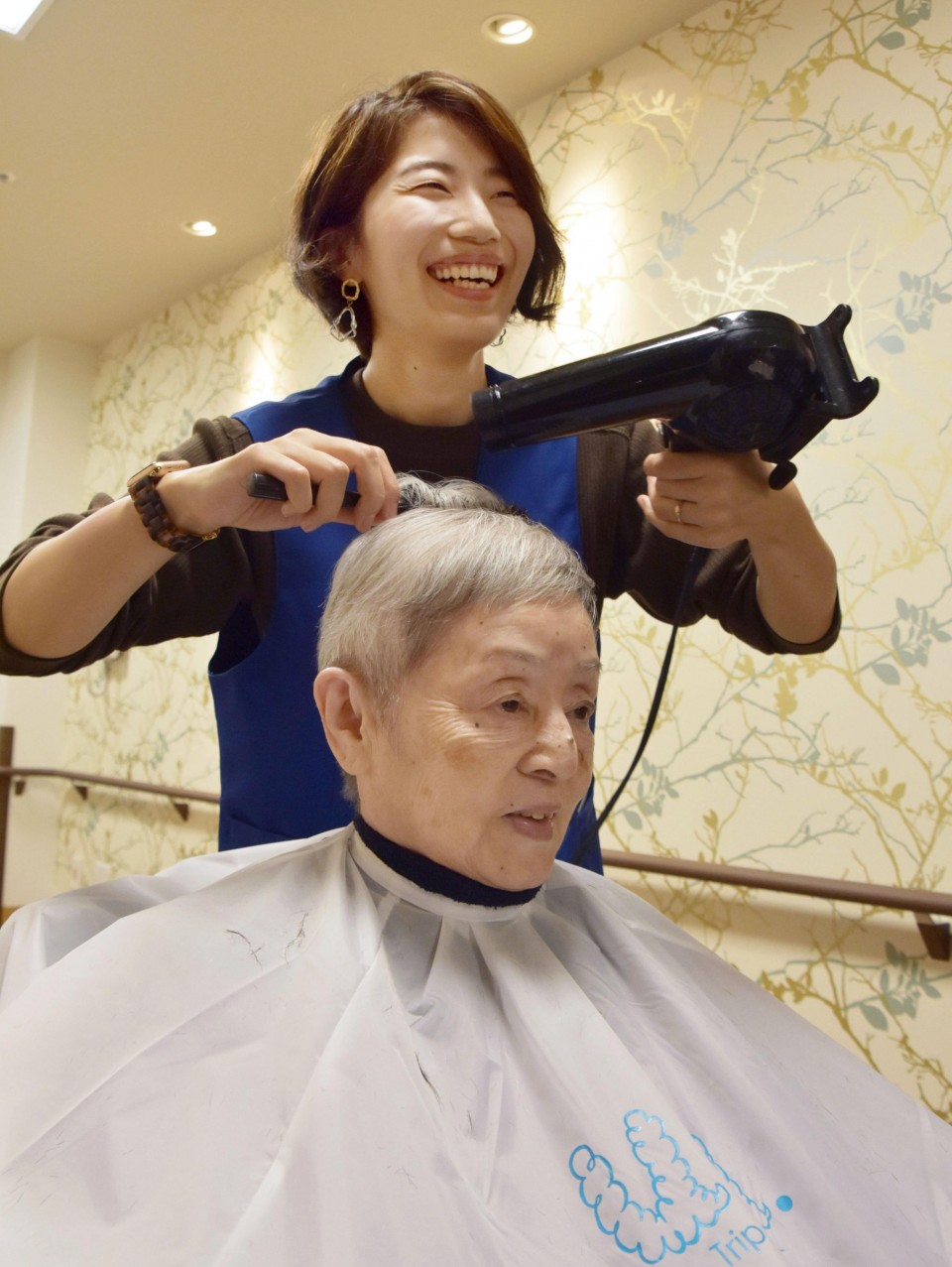 It is geared to customers who find it difficult to go out due to advancing age, sickness or other disabilities as well as mothers busy rearing children.

"Such (on-site) haircutting services were often provided on a makeshift basis, simply by someone laying out a blue tarpaulin, but people sometimes complained of getting strange hairstyles," said Kazuya Yuasa, 32, president of Trip Salon.

Yuasa said that by providing a luxurious salon experience, including scenting rooms with aroma oils, Trip Salon hopes to offer customers and their families a change of pace.

Some customers are moved to tears, according to Yuasa. "There are those who tell me they have regained their former beauty," he said.

In July, Recruit Lifestyle Co., the Tokyo-based operator of a search site for beauty salons, found both widespread and rising awareness of the availability of barber and beauty-care dispatch services among people who live with family members in need of nursing care.

In a survey of some 1,900 such people, 80 percent knew of the services while more than 30 percent had used them, with both percentages higher than in the previous survey conducted last year. People were also using additional services, including hand massages and facial treatments.

According to the company, the number of beauty salons offering on-site services is increasing out of growing concern that more customers will be unable to visit them due to their advancing age. Since the work can be done during appointed time slots, there is also an advantage for beauticians raising children or caring for parents.

Starting in 2016, for example, the Tenri municipal government in Nara Prefecture began offering vouchers for on-site beauty-care services in return for donations under the hometown tax or "furusato nozei" system, which enables people to donate money to support local governments in exchange for gifts and certain tax exemptions.

A person who donates 10,000 yen ($92.00) to the program receives a voucher worth 3,000 yen as a gift to be used by a citizen aged 65 and over, a person with a disability or someone too busy raising children or caring for parents to visit a beauty salon.

"We expect donors to use the vouchers as a token of their appreciation to their parents or people they are indebted to," said the city official in charge.