Startups across Japan have been developing innovative systems to provide people with clean water in disasters, in a country particularly vulnerable to typhoons and earthquakes.

With residents of Chiba Prefecture near the capital still reeling from powerful Typhoon Faxai that caused major power and water outages in September, water preparedness has resurfaced as a major issue of concern. 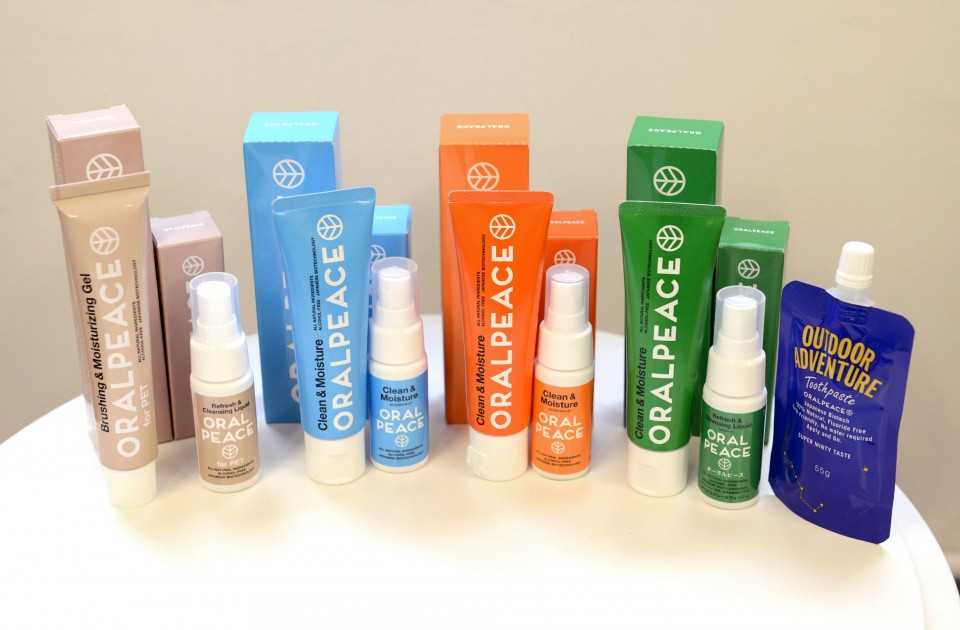 "I hope it will become common for people in times of disaster to still have access to water for daily activities," said Yosuke Maeda, chief operating officer of Wota Corp. in Tokyo.

The startup launched by the University of Tokyo has developed a wastewater recycling system for bathing called the Wota Box that has already proved effective in multiple disasters.

The Cabinet Office's evacuation center management guidelines cite bathing, in particular, as vital for health and sanitation in disasters.

The company provided shower services at shelters for people affected by strong earthquakes in Kumamoto Prefecture and its vicinity in 2016, major floods in western Japan in 2018 and a severe earthquake that struck Hokkaido in 2018, with over 300 people using the system at evacuation centers, it said.

Utilizing artificial intelligence technology and multiple filters, including a reverse osmosis membrane and charcoal filter, the system can recycle as much as 98 percent of wastewater.

"If it becomes more widely used the cost will fall," said Maeda, referring to the manufacturer's 5 million yen ($46,500) retail price for a full disaster shelter package. "We've already received inquiries from a developer of high-rise condominiums and a management association," he said.

Although people are encouraged to store three days' supply of water at home, assuming a person consumes 3 liters per day, it is difficult for households, especially large families, to store sufficient water in plastic bottle due to limited space.

Aquatechnology-plus in Wakayama Prefecture, western Japan, has developed a water purifier with a storage tank for commercialization. The 150-liter stainless steel tank normally stores tap water that passes through a water purifier for daily use, but in the event of an earthquake, a valve closes automatically, preventing unclean water from entering the tank, the company said. 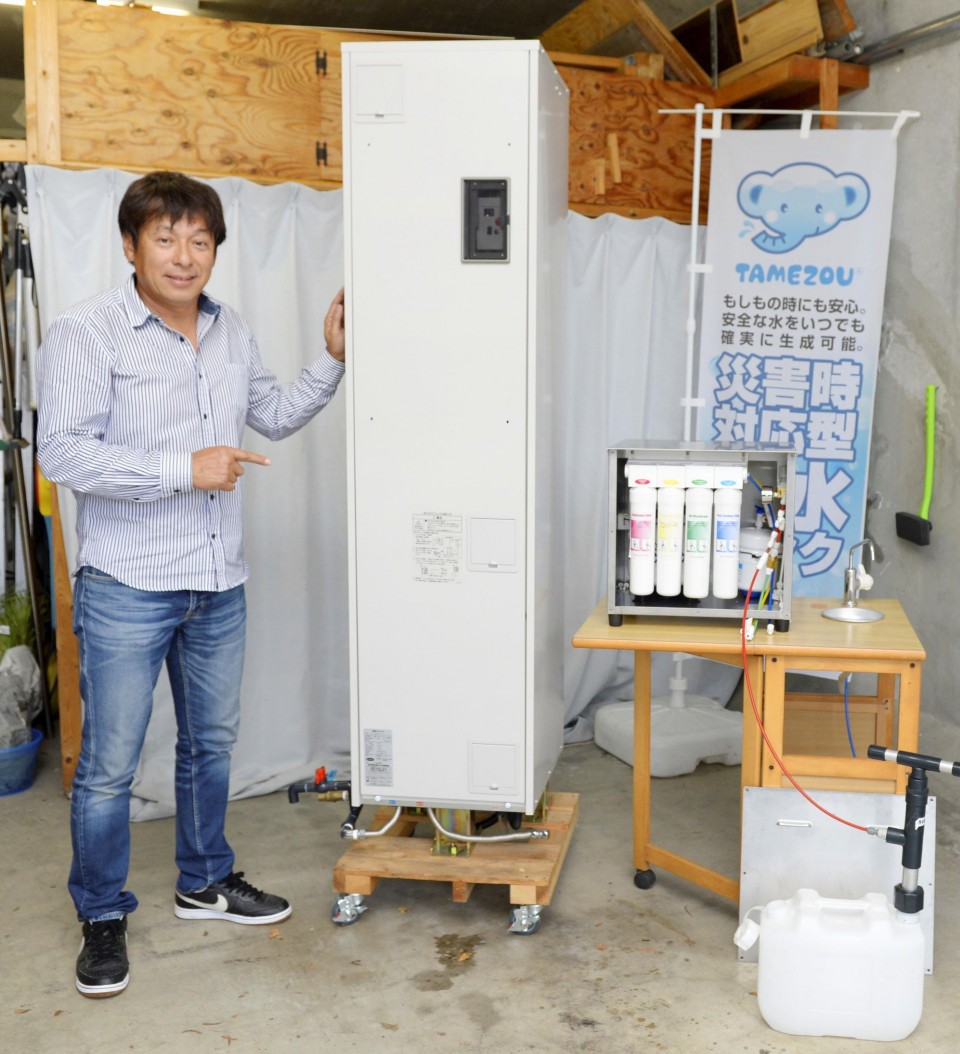 (Shigeyuki Toguchi and his company's Tamezou water purifier and storage tank are pictured in September 2019 in Wakayama Prefecture.)

"I want to be ready before a disaster strikes and I would like to contribute to building a disaster-resilient community," said Shigeyuki Toguchi, president of the startup, who was involved in electrical restoration work following the Great Hanshin-Awaji Earthquake that devastated Kobe and its vicinity in 1995.

Toguchi, who is a certified disaster response specialist, is thinking of selling the tanks, priced at around 600,000 yen, in the Kansai region at first, eventually hoping to expand across the country.

Another startup in Yokohama is selling an oral hygiene product that does not require water for rinsing. 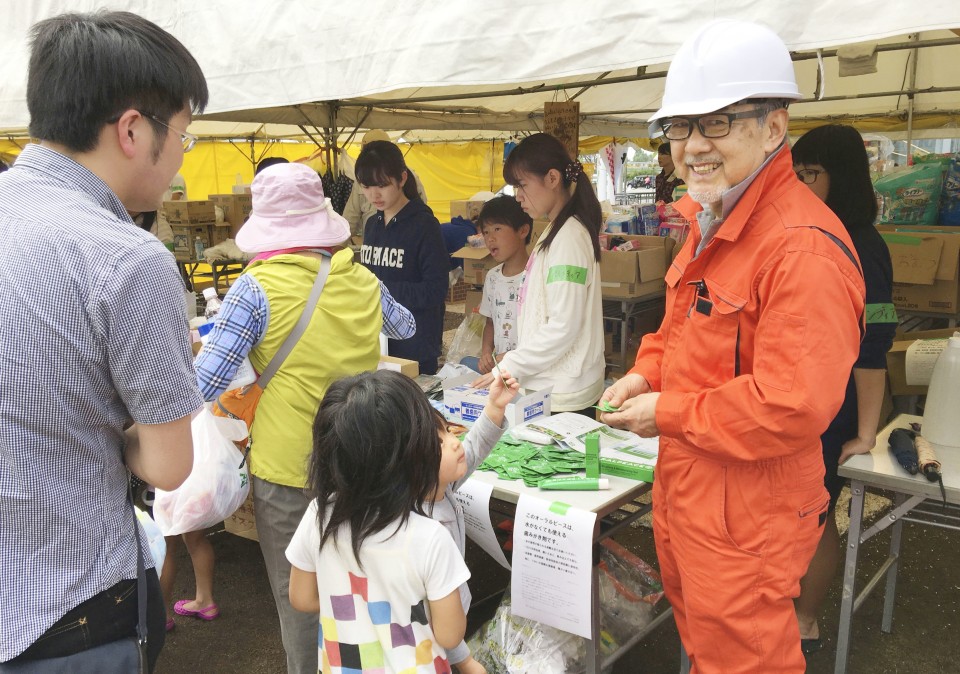 (Oral Peace products are distributed at an evacuation shelter after the Kumamoto Earthquake in April 2016.)

Trife Inc.'s OralPeace hypoallergenic and safe-to-swallow products, made from plant-derived ingredients, are handy for cleaning teeth during a disaster. They come in gel and spray form, priced at 1,320 yen and 1,100 yen, respectively.

The products were originally developed for people who have trouble gargling, such as the elderly and people with disabilities, but are now used in disaster-hit areas.

The company distributed OralPeace products for free at shelters for people affected by the 2016 earthquakes in Kumamoto and this year's Typhoon Faxai. Teshima is hoping to visit disaster-hit areas around the world, as well as refugee camps, in the future and to give his products to people in need. 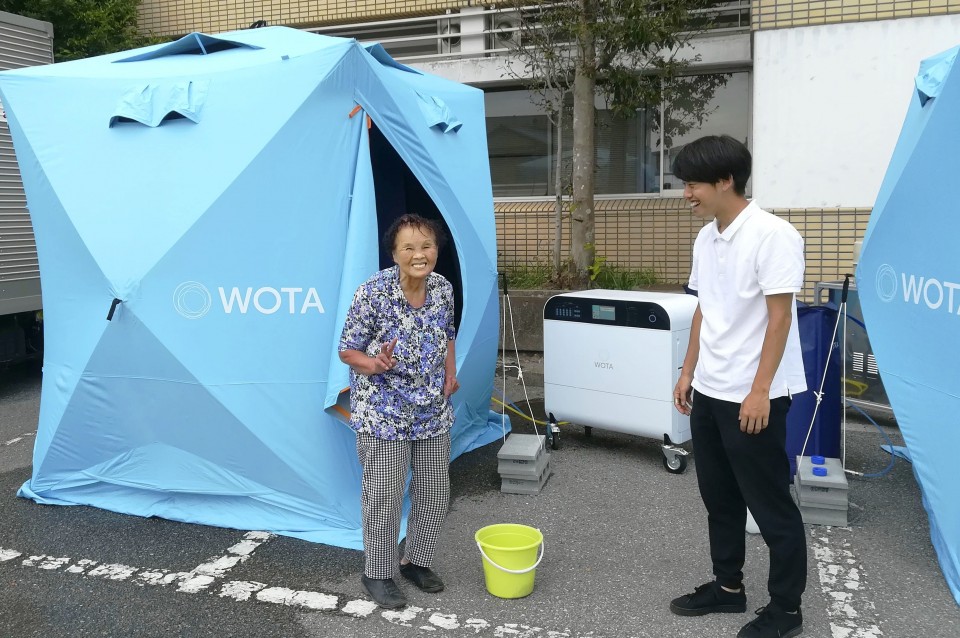