Josh Adams scored a hat trick of tries to lead Wales to a 29-17 victory over Fiji on Wednesday in a bruising Pool D battle at Oita Stadium.

The four tries to two win may have come at a heavy cost for the title hopefuls, however, with two of their stars -- flyhalf Dan Biggar and outside center Jonathan Davies -- leaving the ground hurt.

The injury to Biggar is of particular concern, with the key playmaker exiting in the second half following a sickening mid-air collision with teammate Liam Williams.

Wales coach Warren Gatland praised his side for staying focused and earning a bonus point from a "tough, physical, great game of rugby."

"We just had to stay in it, keep trying to play three phases. When we kept the ball and played three phases we created opportunities," said Gatland, whose side look certain to clinch top spot in the group, with only Uruguay left to play on Sunday. 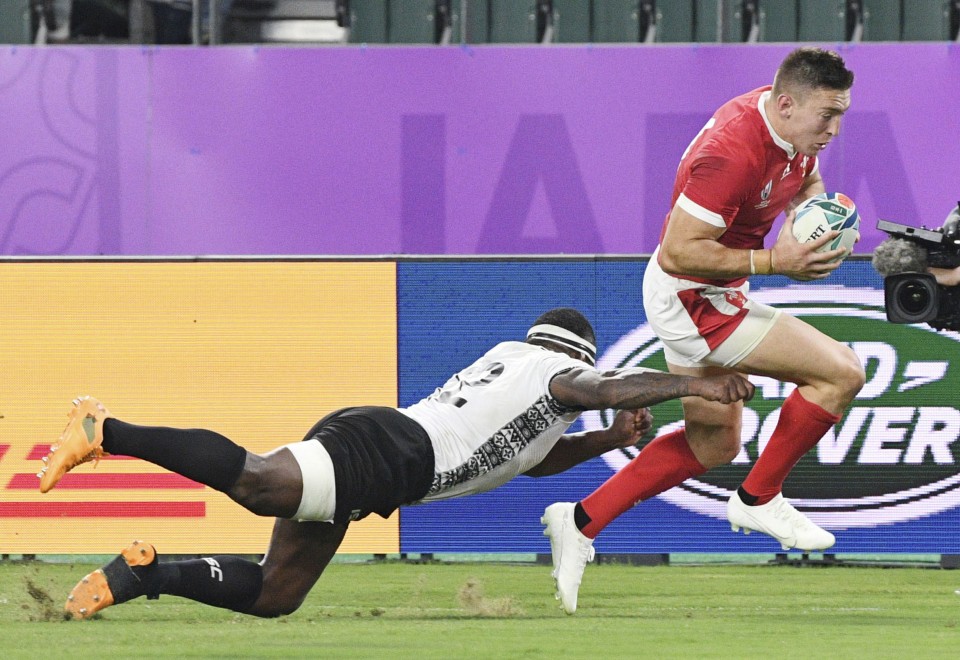 Winger Semi Radradra was outstanding for Fiji, earning man-of-the-match honors as he spearheaded an attack that battered the Welsh defense.

"We knew this was our last game and we tried to empty the tank, keep it up, and empty all our energy," the former Australian National Rugby League superstar said.

The Flying Fijians made an explosive start to their final match of the tournament, with winger Josua Tuisova going over after just three minutes.

Fiji had quickly advanced into the 22 after their captain Dominiko Waqaniburotu burst through the Welsh midfield following a fantastic offload by Leone Nakarawa.

With the men in red penalized for offside, John McKee's Fiji took a five-meter scrum and quickly spread the ball wide to the right, where Tuisova powered past a pair of tacklers to touch down inches inside the corner post. 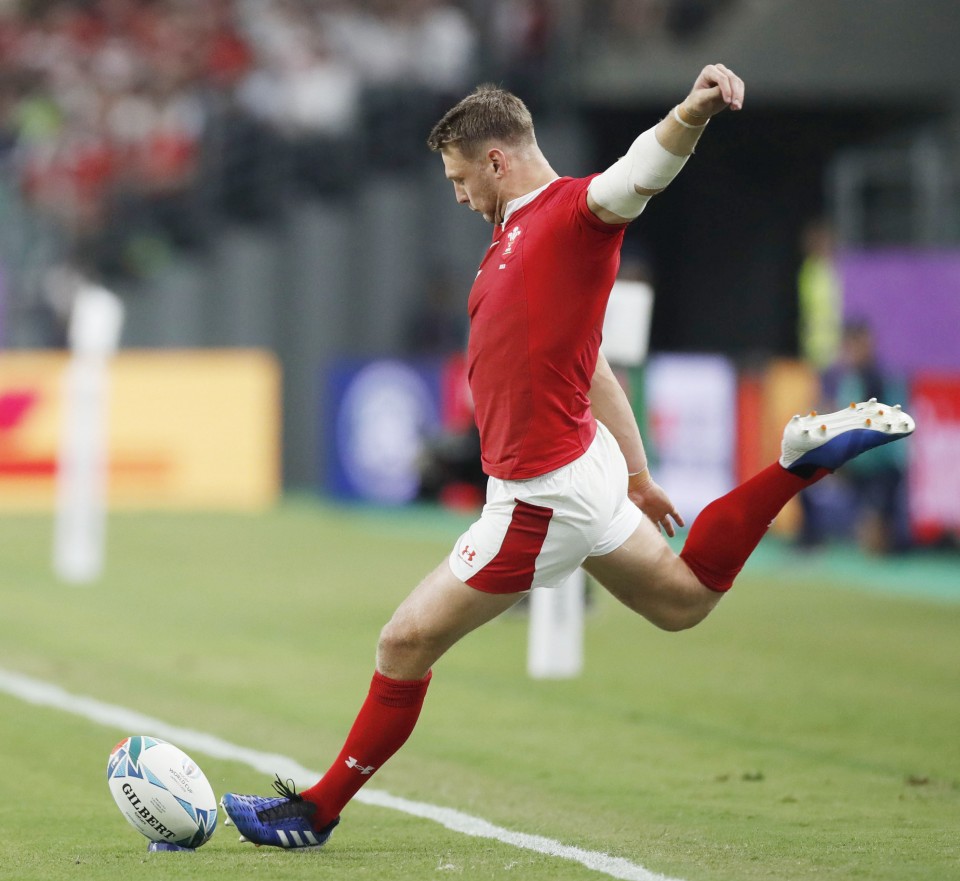 A moment of euphoria for the Six Nations champions turned to disappointment when Josh Navidi crossed the line in the sixth minute, only for French referee Jerome Garces to rule a knock-on.

The Fijians looked to have notched their second try just moments later when Radradra popped a ball back inside for Frank Lomani.

The television match official ruled Radradra's pass forward, but in a blow to Wales, prop Ken Owens was sent to the sin bin for a dangerous late tackle on Viliame Mata in the same passage of play.

Fiji spread quickly to the right from the ensuing penalty, this time finding fullback Kini Murimurivalu, who crashed over after fending off the desperate Welsh defense.

But the goal-kicking woes that cost Fiji dearly in their upset loss to Uruguay emerged once again, with flyhalf Ben Volavola missing a second sideline conversion to leave the lead at 10-0. 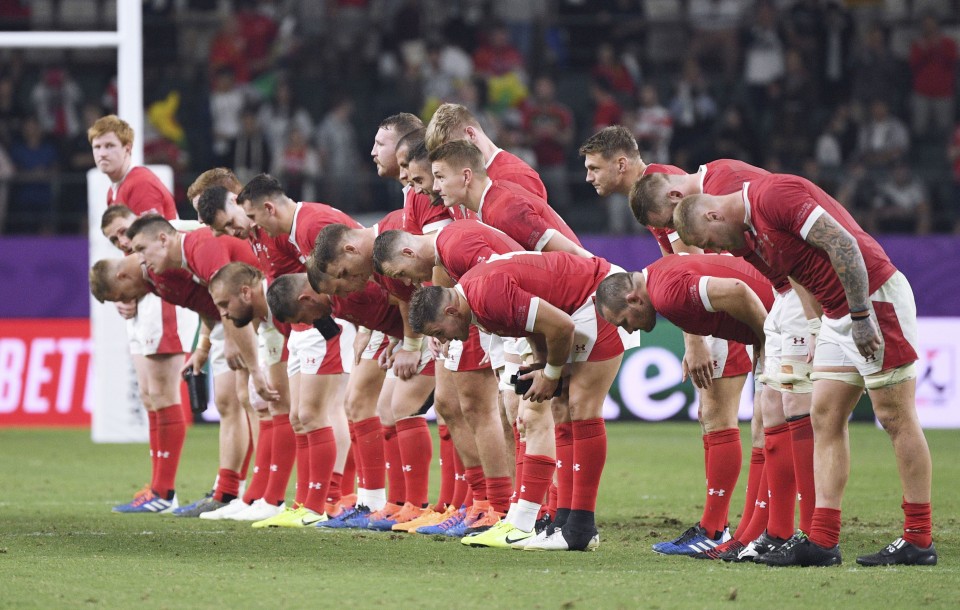 Wales struck back through the boot of Biggar in the 17th minute, shortly after Fiji second-rower Tevita Cavubati joined Owens in the sin bin for diving into the ruck with his shoulder.

The Welsh flyhalf caught the Fijian backline out of position with a clever cross-field kick to the left for Adams, who crossed in the corner. Biggar added the extras to cut the deficit to 10-7.

Wales began to increasingly assert themselves from the midway point of the first half, pressuring the Fijian defense as they strung together phases inside the 22.

The pressure took its toll when Fijian flanker Semi Kunatani became the third player to be sent to the sin bin following a succession of infringements by the Pacific islanders.

The TMO waved off a Welsh try when Adams put his foot into touch, but the winger bagged his second five-pointer in the 30th minute when the Welsh once again spread the ball to beat a lackluster Fijian defense on the left side.

Biggar was again on target from a tough angle to give Gatland's men a 14-10 lead.

Fiji fought back late in the half despite being a man down. Volavola put Radradra through on the left with a clever grubber, but Williams stopped the flying winger just short of the line.

After swinging the ball to the opposite wing, Fiji almost had another try, but Volavola sent a forward pass to an unmarked Mata by the touchline, leaving the score 14-10 at halftime.

Fiji came out swinging after the break, with a barnstorming Radradra going over on the left, only to have the try wiped away for another forward pass.

But when James Davies was sent to the bin for a deliberate offside, the Fijians were quick to exploit the advantage, taking a 17-14 lead with a penalty try after mauling their way over from a lineout.

In a horrifying moment for Welsh fans, Biggar exited the match after taking a heavy mid-air hit to the head from Williams and then falling and suffering a second blow when his head slammed into the turf.

His replacement Rhys Patchell was quickly into the action, slotting a penalty to level the scores at 17-17.

Wales went back in front when Adams got his hat-trick off an outstanding break from Jonathan Davis, who found his winger on the outside with a pass out of the back of his hand.

Fiji continued to press forward, with an electrifying Radradra bashing and sidestepping his way through the Welsh defense.

As Volavola kicked deep into Welsh territory, the ball took an awkward bounce over Patchell and Adams and into the hands of Tuisova. With the try line beckoning the winger threw a pass to an unsuspecting Nakarawa, who spilled the ball and perhaps Fiji's hopes of victory with it.

Wales sealed the result after turning over the ball inside the Fijian 22, with Gareth Davies speeding through the gap and putting Williams in for a try under the posts.

The hard-fought loss, with numerous errors, characterized a frustrating tournament for Fiji. They outplayed Australia in the early stages of their pool opener, a 39-21 defeat in Sapporo, but suffered one of the upsets of the tournament in their 30-27 loss to Uruguay.

They leave the tournament with their sole win a 45-10 thrashing of Georgia in Osaka.

McKee said his players were disappointed they had fallen short of their quarterfinal goal, but lauded their effort against a world-class Wales side.

"I'm so proud of the effort our boys put in this evening. They're playing a Six Nations champion team that's been number one in the world this year and they really took the game to them."