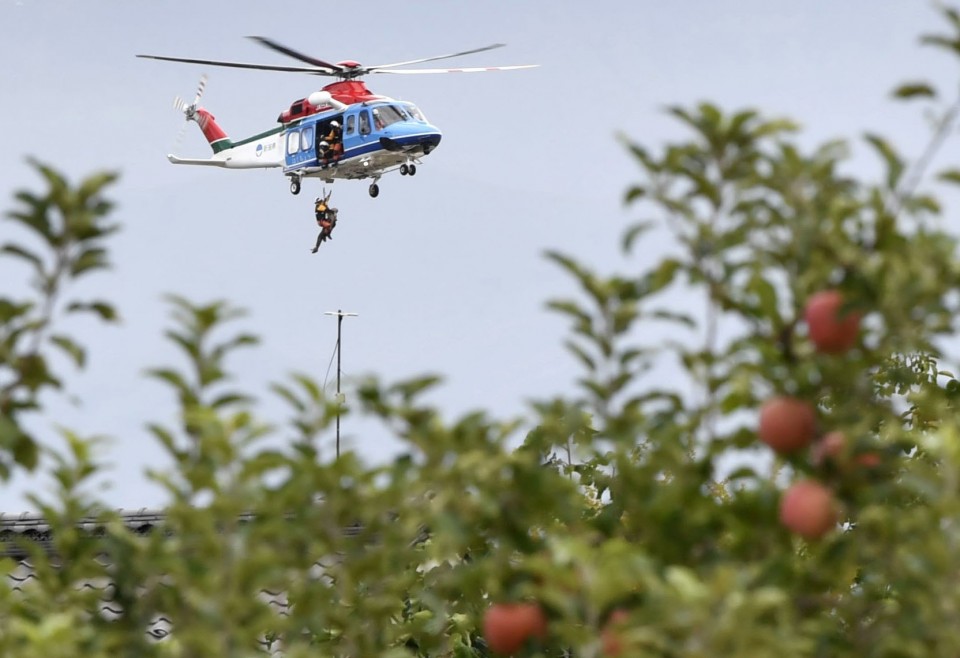 TOKYO - Japanese rescuers raced against the clock Tuesday to locate 14 people still missing after a catastrophic typhoon over the weekend killed at least 73 others and paralyzed numerous areas with flooding.

Those unaccounted for in the wake of Typhoon Hagibis, which brought record-breaking rainfall to huge swaths of the country, were tallied by Kyodo News based on information provided by authorities in each region.

Japan is still scrambling to get a complete picture of the damage. The infrastructure ministry said collapsed embankments at 73 locations along 52 rivers had been confirmed, but officials said the scale of damage remains unclear as they cannot reach some areas due to very high water levels.

The most powerful typhoon to hit Japan in decades also caused mudslides, and electricity and water outages in various parts of the country.

A total of 170 mudslides were reported in 19 of Japan's 47 prefectures, while nearly 10,000 homes had been hit by muddy floodwater, according to government officials.

In the central Japan city of Nagano, one of the hardest-hit areas, an embankment of the Chikuma River was breached, cutting off hundreds of people.

In a district near the embankment, telephone poles were felled and dwellings destroyed. A school of small fish swam in a pool of muddy water, while pre-harvest apples bobbed on the floodwater.

"It's a large embankment so I thought it would definitely be safe," said 85-year-old Shigeo Seki. "I'm glad my grandchild forced me to evacuate."

In the Miyagi Prefecture town of Marumori in northeastern Japan, water was finally being removed from around the flooded town office, which was only accessible by boat Saturday.

"My daughter is so scared she can't stop shaking. We want to go home quickly," said Rie Nishioka, 39, who was among the evacuees in the town. 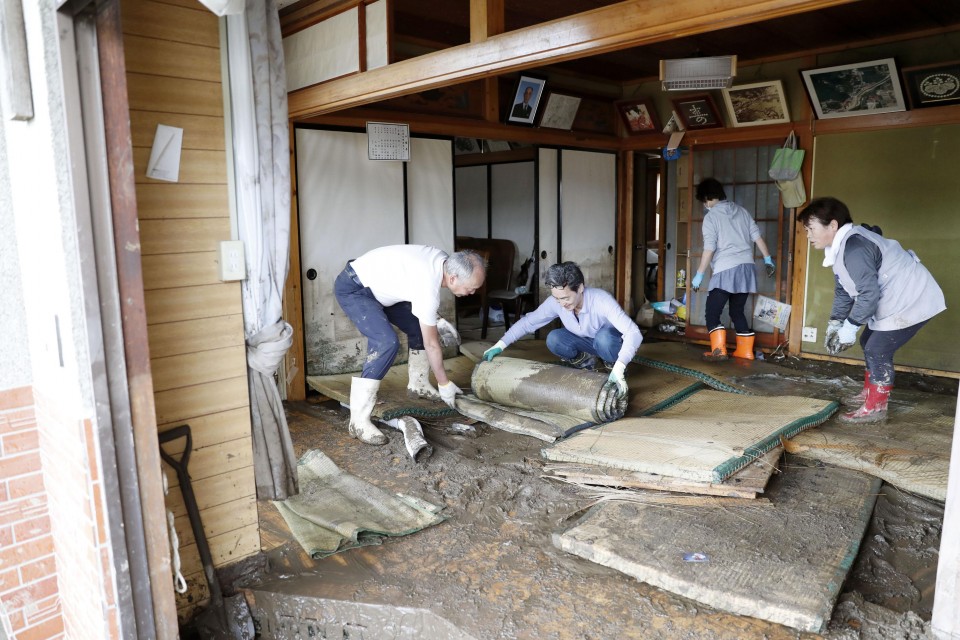 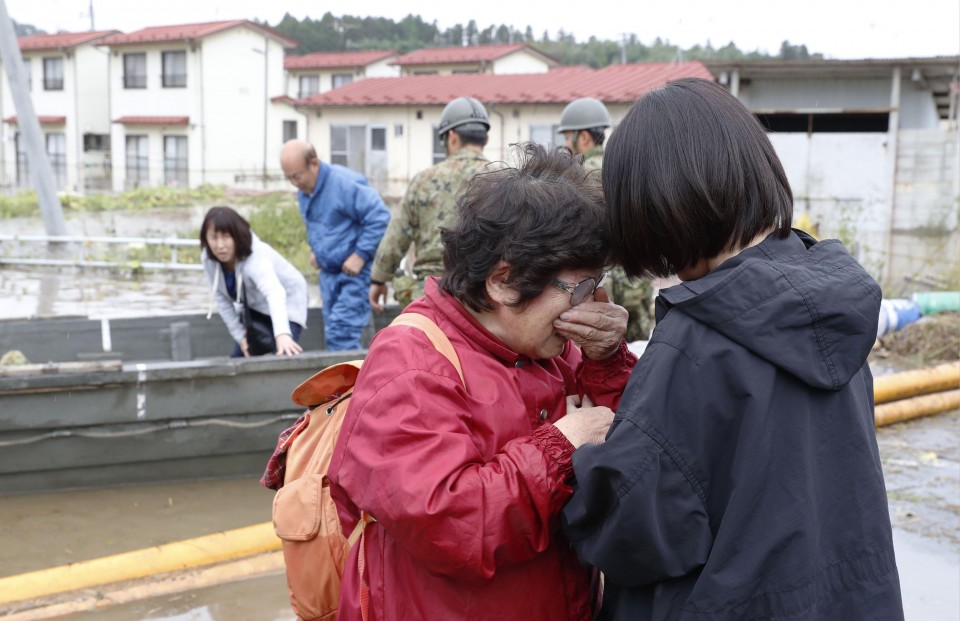 As people return home and start cleaning up, government officials urged them to wear masks and gloves, and use sanitizing agents to prevent infection.

The number of homes without power had fallen significantly from a peak of around 520,000, but about 17,000 were still experiencing blackouts as of 9 p.m. on Tuesday, according to utility companies.

They included many homes in Chiba Prefecture, which suffered a prolonged power outage after Typhoon Faxai made landfall there in early September.

The health ministry said 128,000 homes in 12 prefectures were without running water.

Prime Minister Shinzo Abe said at a disaster task force meeting Tuesday that the government will use reserve funds and, if necessary, draft a supplementary budget for reconstruction work.

"It is urgent to provide adequate support for the victims," Abe said later during a parliamentary session. "There is concern that the impact on life and economic activities will be prolonged." 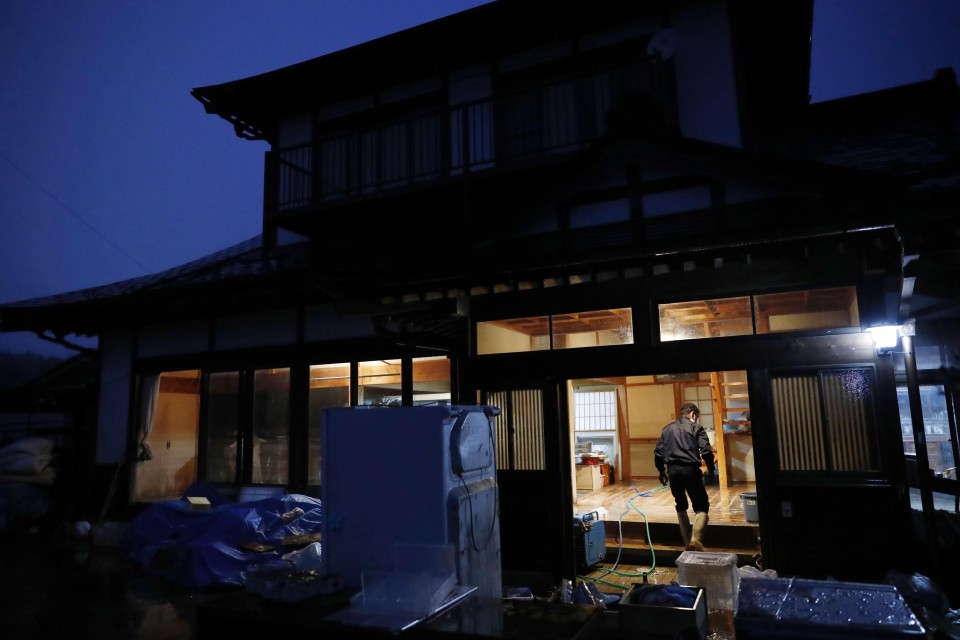 Defense Minister Taro Kono said he is summoning around 200 reserve members of the Self-Defense Forces and will raise the number to 1,000 if needed to facilitate rescue efforts and distribute water and other supplies to those affected.

It is the first time the reserve force has been mobilized since 2011, when a massive earthquake and tsunami devastated wide areas of northeastern Japan.

While most train networks in Japan were back to normal on Tuesday, some sections of tracks had only limited services or remained closed.

East Japan Railway Co. said it will take at least one to two weeks to normalize shinkansen services between Tokyo and Kanazawa after a number of its bullet trains were swamped by floodwater at a railyard in Nagano Prefecture.

Sanriku Railway Co., which in March finally resumed all operations disrupted by the 2011 earthquake and tsunami, suspended services between Kuji and Kamaishi in Iwate Prefecture.

On Tuesday, more than 280 elementary, junior high and high schools were closed for the day in 12 prefectures, including Fukushima and Nagano.