Canada missed their chance to play their final Rugby World Cup match due to a powerful typhoon, but the team stayed in Kamaishi in northeastern Japan on Sunday to help out local residents with their cleanup efforts.

Canada were aiming for their first win of the tournament in their game against Namibia in the city, one of the northeastern cities that was largely destroyed in the country's 2011 earthquake-tsunami twin disasters.

After World Cup organizers announced the cancelation of the match due to the impact of Typhoon Hagibis, the Canadians employed shovels to help local residents remove mud from their driveways and cleanup a house that was flooded as a result of the heavy rain.

"I think they would've done the same thing if they were in Canada, so it's something we probably felt that we can help and we've got a day off and no game," captain Tyler Ardron said.

"We were just disappointed that we couldn't play. We've really targeted this game and wanted a good game out of it, but unfortunately we couldn't," he said. "But we've made the most of it. We've come out in the community." 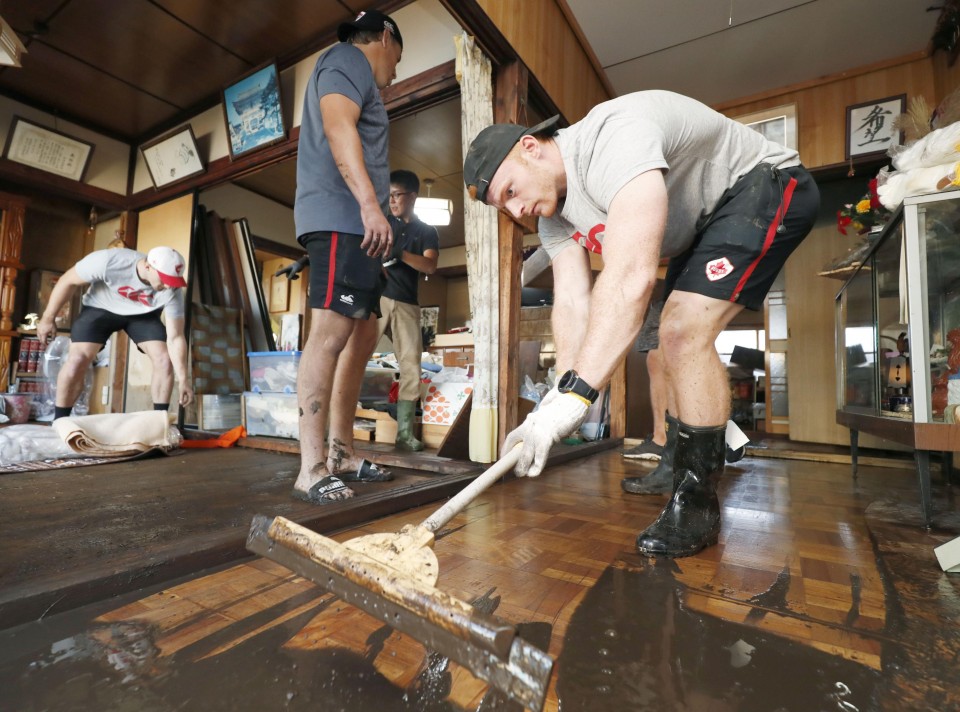 (Canada player Peter Nelson volunteers to clean up mud in a house in Kamaishi, northeastern Japan, on Oct. 13, 2019, following the cancelation of a Rugby World Cup Pool B match against Namibia due to a powerful typhoon.)

About 15 players and officials made the most of their strength and physicality for nearly two hours under the sun. They filled sandbags with mud and easily carried them out of the way.

"They have so much physical power compared to us. They've just been here for a short time, but their speed is impressive. I have no words," said Hironori Miura, 40, a local resident. "I feel sorry they couldn't play today, but they're a huge help."

Kamaishi locals have been hoping to showcase their recovery from the earthquake and tsunami disaster on March 11, 2011, that claimed the lives of more than 1,000 people in the city.

Canada hooker Eric Howard said it was a point the team emphasized when preparing for the game, adding he wanted to play in front of the locals.

"People of Kamaishi have obviously gone through so much. For them to host a World Cup game I think means a lot to them, but also a lot to us, because we understand the significance of it," he said. "I think we really wanted to put on a special game for everyone. It's really unfortunate that these things happen because the people of Kamaishi deserve so much more."

"The Japanese people have been so good to us, and when something like this happens, you feel so obligated to help out."

Kamaishi Recovery Memorial Stadium was built on the site of two schools swept away by the tsunami, and also staged a Sept. 25 game in which Uruguay defeated Fiji 30-27.

Fans flocked to the fan zone in the city to ask if they could watch any of the matches on the screen there, but they were told by volunteers that it was closed for the day.

Hatsuko Tokumasu, 68, was one of the local residents looking forward to watching World Cup matches in the city of her birth. While she did not live in the city at the time of the disaster, she said she has noticed how much support the city has received.

"I wanted to express my appreciation to all of those who helped with the reconstruction effort," she said. "The cancelation is disappointing, but we know for a fact that safety is the priority."