The International Olympic Committee will not drop a plan to move the 2020 Summer Games' marathons and race walking events to Sapporo from Tokyo, a senior IOC official said Friday.

"It's not a matter of if the Tokyo government insists. The decision has been taken," John Coates, chairman of the IOC Coordination Commission, told reporters after holding talks with Tokyo Gov. Yuriko Koike, who has said the Japanese capital's desire to hold the races has not changed.

"The IOC Executive Board is the competent authority to take a decision such as this," Coates said, adding that it has "a responsibility under the Olympic Charter to always put the health of athletes first."

Amid persistent concerns about the impact of the expected extreme heat in Tokyo during the games, the IOC abruptly announced last week that all of the road athletics events should be moved to Sapporo, the host city of the 1972 Winter Olympics.

Koike plans to promote Tokyo as the best place to hold the races when she attends a meeting of the IOC Coordination Commission in Tokyo from Oct. 30 to Nov. 1, with both sides showing no signs of backing down.

Coates touched on the need for considering refunds for ticket holders and providing compensation for losses resulting from the sudden change.

At the outset of the meeting, Koike told him that many Tokyoites, who were thrilled to see the competitions, are disappointed by the proposal, given that distance running is popular in Japan and many spectators have already made arrangements to watch them in the capital.

Taking into consideration what a disappointment it is for Tokyo, Coates said that medal ceremonies for the road athletics events could be held in Tokyo, even if the competitions are held in Sapporo. 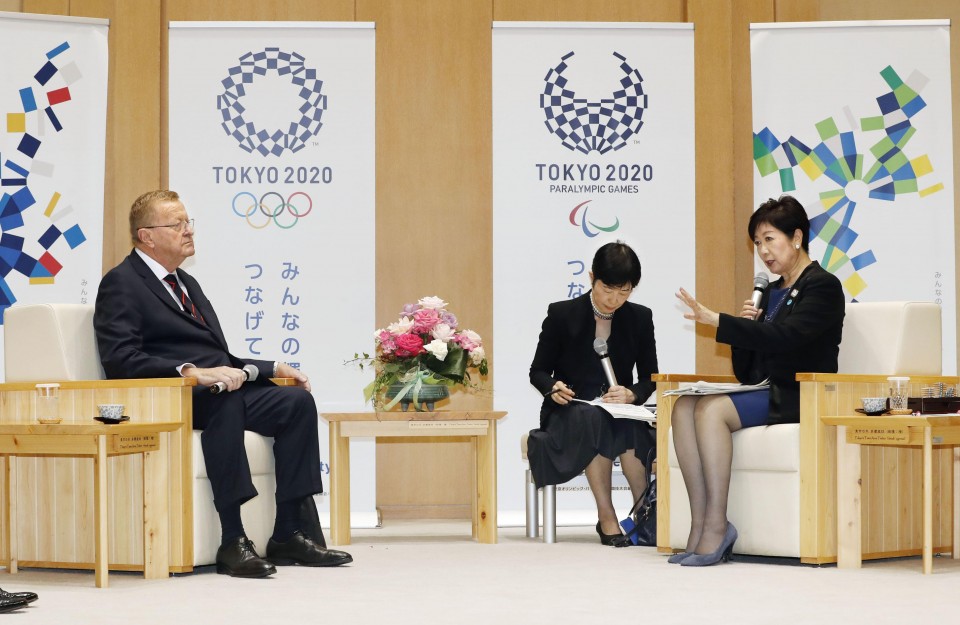 While welcoming the IOC's plan, Sapporo officials on Friday expressed hope that the final decision will be made as soon as possible.

"We have no time to prepare," Sapporo Mayor Katsuhiro Akimoto told reporters.

Ahead of the meeting with Coates, Koike said at a regular press conference that the metropolitan government will not shoulder any cost if the races are moved to Sapporo.

"It's necessary to analyze the matter legally. Tokyo citizens should receive a satisfactory explanation," Koike said at the press conference.

Koike suggested the metropolitan government may take legal action over costs it had spent on heat abatement measures, including surfacing roads along the route with a special reflective material.

Coates pointed out to the press that additional expenditures should be covered by reserves in the budget of the 2020 Summer Games organizer and the metropolitan government while suggesting that the IOC may address the issue if there is a shortage of financial resources.

The IOC's plan to move the events to the city on Japan's northern main island of Hokkaido emerged weeks after many competitors dropped out of marathon and race walking events at the track and field world championships in Doha, Qatar, due to heat, despite the races starting at midnight.

The Tokyo government has been exploring the possibility of setting the start times of marathons and race walking at 5 a.m., which is around sunrise in Tokyo in early August, as an alternative to the IOC's plan.

The start times had already been moved up to 6 a.m. to avoid the heat.