Rugby: All Blacks' World Cup dominance under threat in Japan 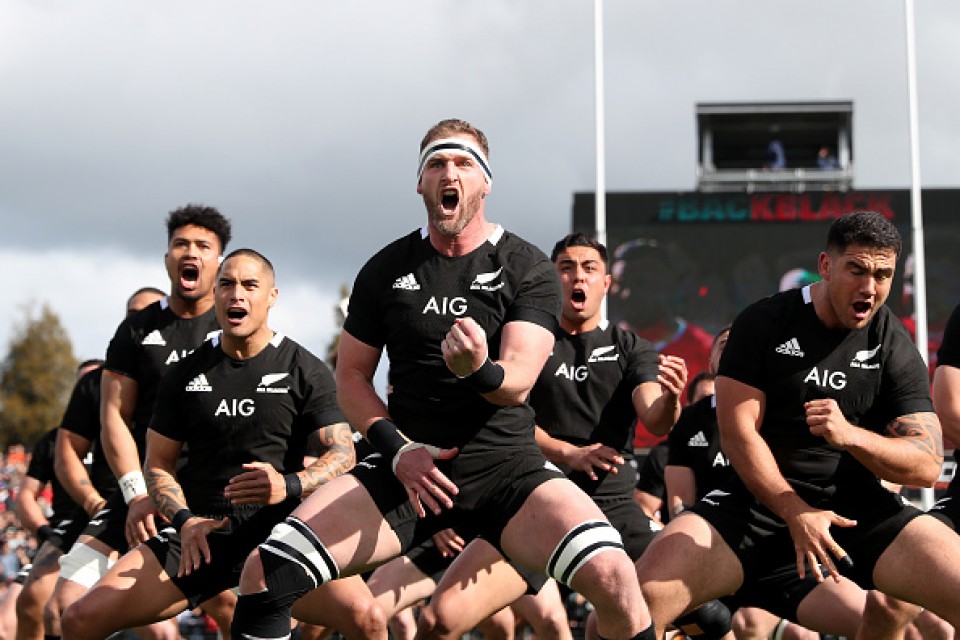 TOKYO - Rugby World Cup 2019 is perhaps the most open of any recent edition, and with two-time reigning champions New Zealand showing uncharacteristic vulnerability, the question is who else might step up to claim the crown?

England have turned to Japan's and Australia's former guru, Eddie Jones, in hopes he can work his magic, Ireland and Wales have made respective charges up the rankings and France always create some noise at the tournament despite failing to snag a win in three previous finals.

The Springboks and Wallabies have arrived from the Southern Hemisphere primed to draw equal with the All Blacks as three-time tournament winners, the former in particularly tip-top shape.

As hosts, Japan will take center stage from the time they walk into Tokyo Stadium on Friday to meet Russia in the tournament opener, but the spotlight will likely shine elsewhere when the championship is on the line.

Bookmakers give New Zealand an approximately 44 percent chance of lifting the William Webb Ellis Cup for the third consecutive time. South Africa and England are deemed next most likely at about 20 percent each.

But could the money men have got the All Blacks' chances wrong?

New Zealand coach Steve Hansen has lost some familiar and fearsome faces that brought them much glory in the past, such as the indomitable break-down busting Richie McCaw, the brilliant ball-playing Dan Carter and the hard-charging Ma'a Nonu.

While New Zealand rugby's talent pool is deep, a lack of big-stage exposure may cost them at the business end.

Twelve-cap Richie Mo'unga, for example, is in line to be handed the No. 10 jersey worn at the last World Cup by Carter. Competing on the edges of a youthful backline, the team's likely starting wingers, Sevu Reece and George Bridge, also have just eight caps between them. 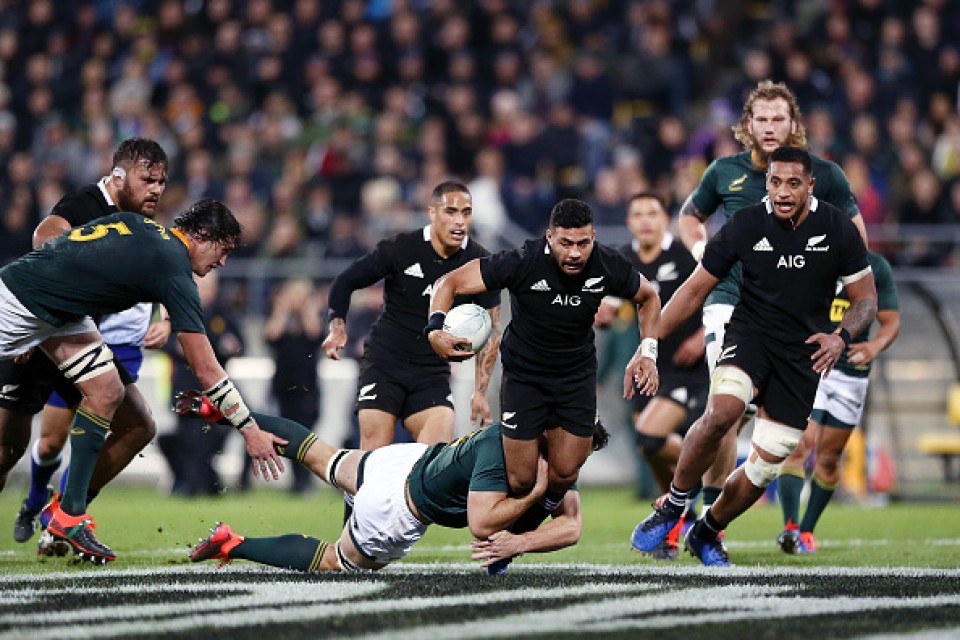 When questioned about his youthful team's shortcomings last Friday, Hansen was having none of it.

"As far as average age and average caps are concerned they are the same as before so I am not worried," he told Kyodo News.

"The key is making sure we prepare well as we try to do something that has never been done before. That's not to say it can be done but that is the challenge and we are embracing it."

Since they were crowned champions in 2015, New Zealand have played 47 times, winning 39, losing six and drawing two, an 83 percent win percentage. In the corresponding period after the 2011 World Cup, they won 42 of 47, or 89 percent.

Any team in any sport would kill for a record like that, but the All Blacks dominance has not shown in their most recent tests. 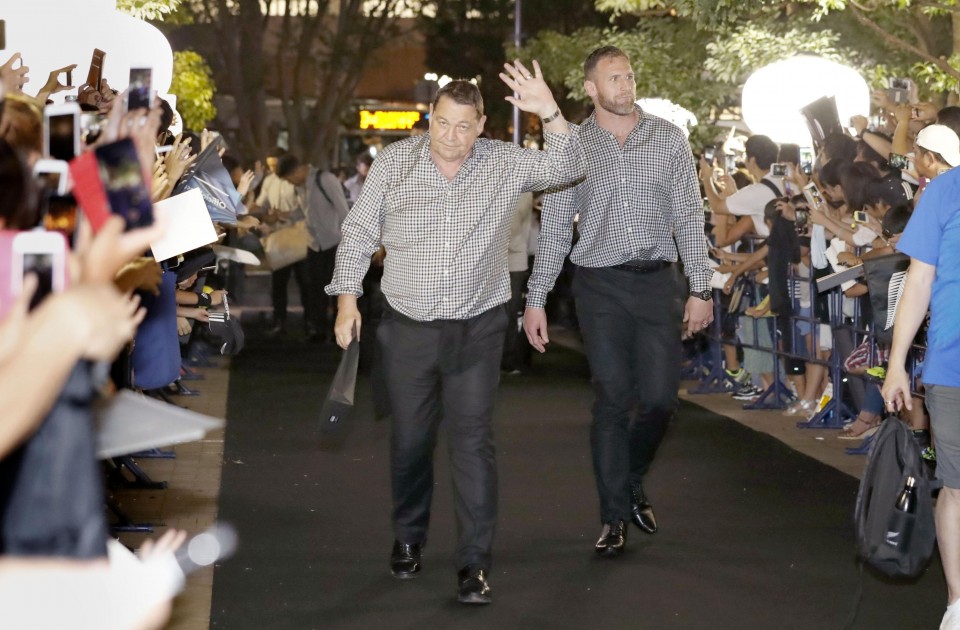 (New Zealand rugby coach Steve Hansen (L) and captain Kieran Read are welcomed as the All Blacks arrive at their training site in Kashiwa, Japan)

Gracenote Sports' Head of Sports Analysis Simon Gleave, a statistician in Japan crunching numbers on his fifth World Cup, pointed out the difference.

"New Zealand are now less of an attacking force than they have been during this World Cup cycle and this has reduced their average winning margin to its lowest level over the last four years," he told Kyodo News after arriving in Tokyo.

"While the All Blacks are still the favorites, they look more vulnerable than they have in a long time," Gleave said.

To be the champ, you have to beat the champ, but no one team can be held up as obvious heir to the throne.

Australia is the most recent team to beat the Kiwis, a 47-26 win in Perth in August, but a week later their cross-Tasman nemesis counterpunched with a 36-0 beat down in Auckland to keep the Bledisloe Cup trophy for the 17th year in a row. 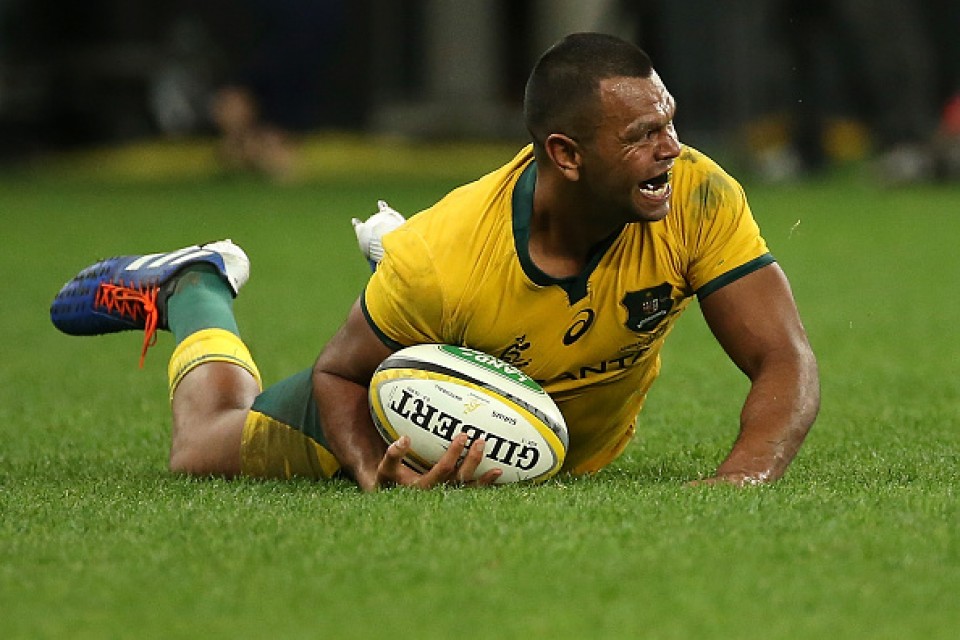 The Wallabies land in Japan missing Israel Folau, long their most dynamic, difference-making player, after he was banished for touting some of his God's less tasteful tenets on Twitter.

Without him, the fancy feet of Kurtley Beale will need to spark the attack, and the rising Samu Kerevi will have to make some Folau-like tackle-busting contributions if Australia are to challenge for a third title.

The other big Southern Hemisphere power, the Springboks, may be best placed to push the All Blacks, and have completed an incredible turnaround in the last two years.

The team figuratively hit bottom with a 57-0 loss to New Zealand and a 38-3 defeat to Ireland, in September and November 2017. Since then, head coach Rassie Erasmus has righted the ship, getting 13 wins in 22 matches, including one over Australia and a draw in Auckland that was enough to secure the 2019 Rugby Championship, their first in eight attempts since the competition was created.

Led by the inspirational, township-raised Siya Kolisi, the first black man to captain South Africa in a test, the 'Boks have an early chance to measure themselves against the best. Their first match against New Zealand, in Yokohama on Sept. 21, will likely determine Pool B's winner. 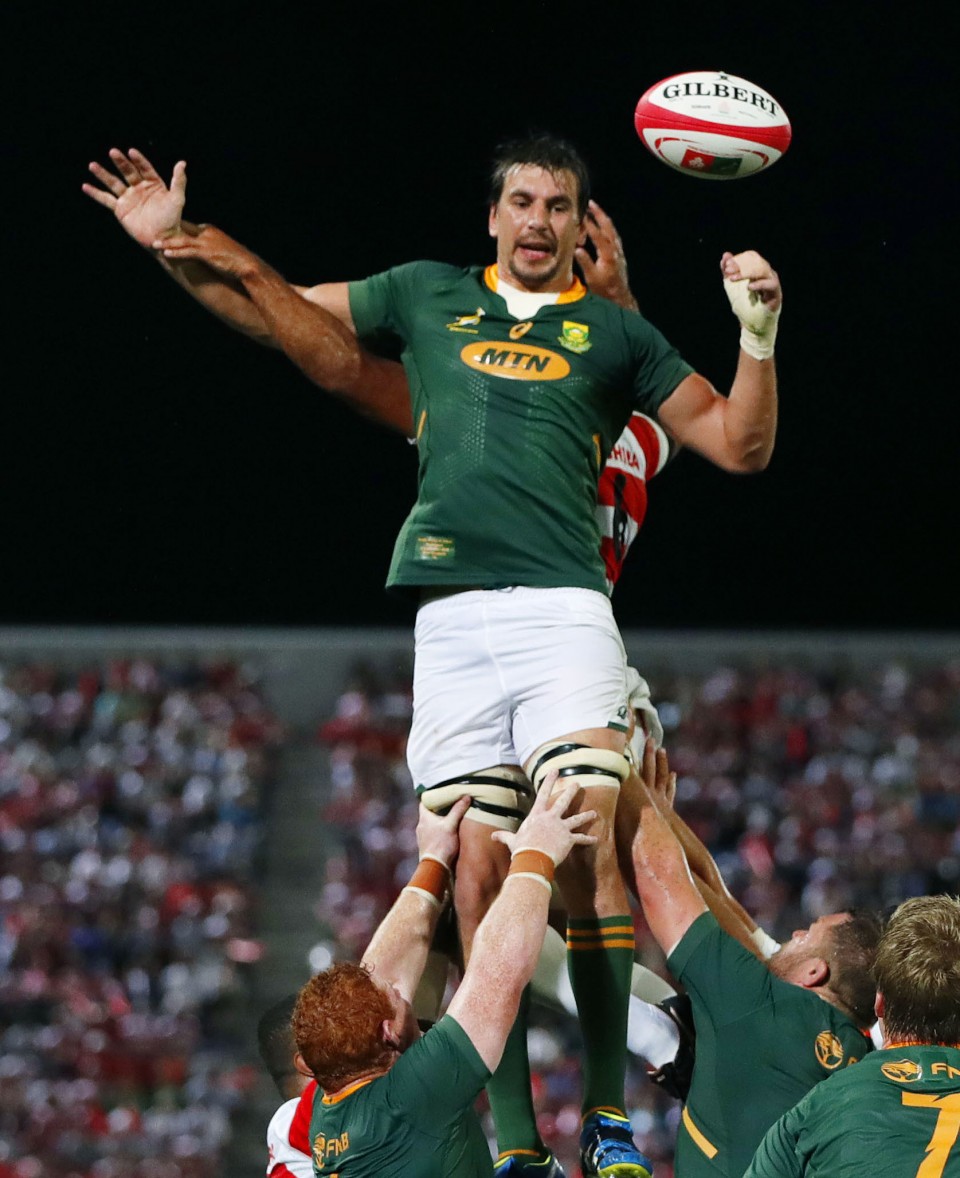 Gleave points out that given the tightness of the two teams' last three tests, "There is little justification for the (betting) market giving New Zealand more than twice as much chance as South Africa of winning the Rugby World Cup."

Whichever team emerges second in Pool B will face the winner of Pool A, almost certainly Ireland or Wales.

Neither has been particularly consistent in recent times, but with both recently having been ranked world No. 1 -- Ireland currently and Wales last month -- they will be expected to put up a good fight for a final-four place.

At the 2015 World Cup, England failed in front of their home fans by being eliminated at the pool stage, and that could happen again in Japan.

If England survives a pool containing the always dangerous France and two-time semifinalists Argentina, they will inevitably meet either New Zealand or South Africa in the semifinals.

Jones has put great emphasis on getting his England squad in fine form to perform in potentially hot and humid conditions, with defense an all-important part of that equation. 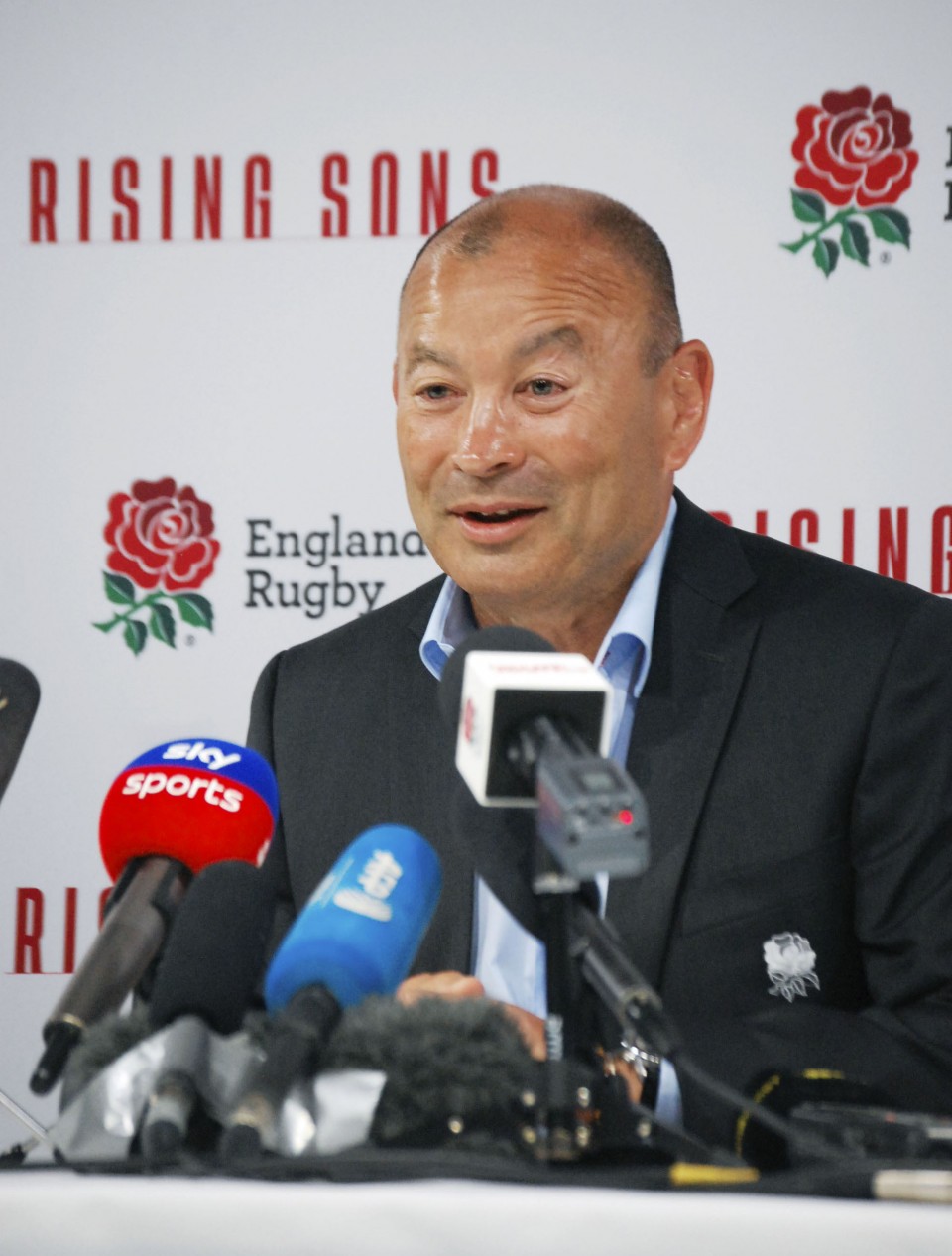 In fact, defenses across the rugby world have become increasingly stout and focused on taking the ball-running out of the game, which puts much more attention on tactical kicking as a weapon to gain field position, or scrambling a defense to open cracks in the wall.

Japan head coach Jamie Joseph has said as much as he looks to find a way for his generally physically overmatched squad to compete. He has emphasized the need for Japan to move the ball off the foot, rather than resorting to battering-ram rugby.

Gleave says this is a trend that may prove a tournament-wide difference-maker.

"With top defenses becoming ever more difficult to breach by breaking the line, clever tactical kicking is becoming more prevalent in international rugby," he said.

"At this World Cup, the best teams will use kicking to get behind the defensive line to create try-scoring opportunities or to gain field position deep in enemy territory, even if this means surrendering the ball initially."

If tactical kicks -- chips, high-balls or deep meter-gaining hoofs, for example -- are to be the dominant skill across the tournament then the 2019 Rugby World Cup promises to be an entertaining spectacle.

And with a near tournament-wide sellout expected across the 12 tournament venues, no matter what tactic wins it for the next world champion, Japan is ready to show it has rugby in its blood.