Protesters gathered Friday evening to form a "human chain" across Hong Kong in support of freedom and democracy, as part of a weeks-long display of civil unrest against a controversial extradition law and alleged police brutality.

"We are here to peacefully fight for freedom and justice against an unjust law," said Rain Yau, a 42-year-old secretary from Hong Kong.

Taped to her chest read a sign in French "France, thank you for supporting our freedom and democracy." She was just one of thousands of people holding signs of gratitude addressed to countries and regions around the world including Japan, South Korea, Britain, Vietnam, Taiwan, the United States and Italy.

Tens of thousands of demonstrators peacefully joined hands to form three human chains -- one on Hong Kong Island and two on Kowloon Peninsula -- with a combined length of around 32 kilometers.

They lined the sidewalks chanting "Do You Hear the People Sing?" -- the name of revolutionary song from the stage musical Les Miserables that calls for people to join in the fight for freedom. 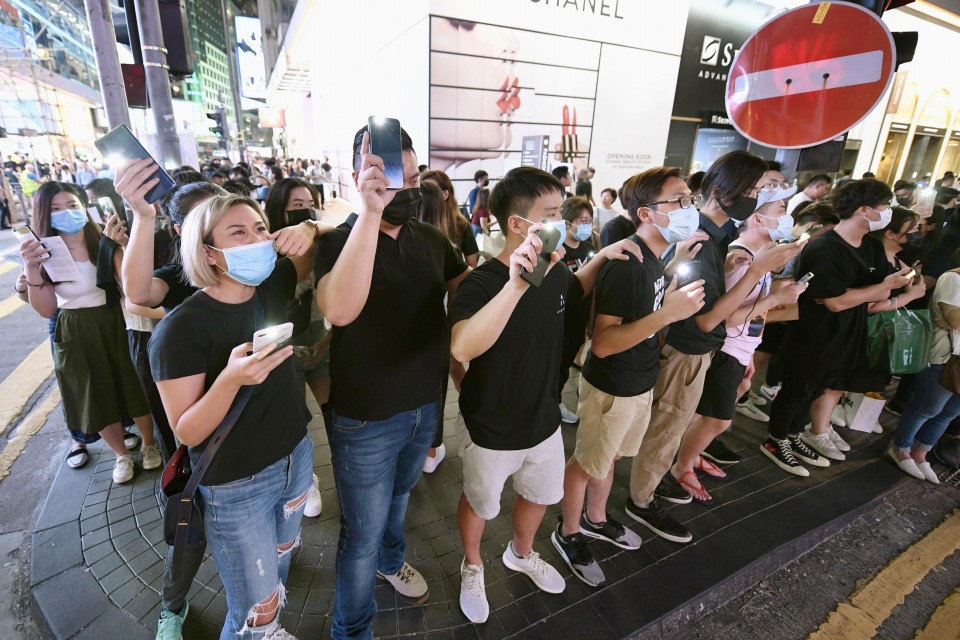 The protesters aim to further pressure the government into totally withdrawing the now-suspended bill, which would allow criminal suspects in Hong Kong to be extradited to mainland China.

The mass display of unity was inspired by the so-called Baltic Way organized across Estonia, Latvia and Lithuania 30 years ago. On this day in 1989, an estimated 2 million people joined hands, forming a human chain that connected the capitals of the three Baltic countries in a call for independence from the then Soviet Union.

"On the anniversary of the Baltic Way, we are showing our solidarity with all the people around the world who are fighting against tyranny," explained Joanne Lai a 28-year-old doctor. "We are not asking for independence, but autonomy within the "one country, two systems" framework," she added, referring to the former British colony's political arrangement since its return to China in 1997.

Millions of people have taken to the streets of Hong Kong since June in protest against the bill in what has become the territory's worst-ever political crisis.

Some of the protests have turned violent and resulted in clashes between police officers and protesters, with one side resorting to tear gas, rubber bullets and other projectiles, and the other side countering by throwing bricks, bamboo sticks and gasoline bombs.

Facing widespread popular opposition, Chief Executive Carrie Lam, Hong Kong's leader, moved to suspend the bill's legislative process and later declared it "dead" in a bid to quell public anger. Unsatisfied, activists have sworn to march on until all of their demands are met.

In addition to the bill's withdrawal, the protesters' demands have grown to include Lam's resignation, universal suffrage for the chief executive and Legislative Council elections, an independent inquiry into alleged police violence against protesters and the granting of pardons for all protesters arrested so far.

The Hong Kong government has rejected all demands, while Beijing has reiterated its support for the government. The central government has gone so far as to suggest military intervention should Hong Kong police fail to control the situation.

In Shenzhen City, just 30 km away in mainland China, the People's Armed Police Force, a paramilitary force, and armored vehicles were seen gathering in recent weeks at a stadium. According to some reports they could be preparing to enter Hong Kong to assist in restoring order should local police fail to do so.