A recently elected pair of Japanese lawmakers with severe physical disabilities entered parliament for the first time on Thursday to attend an extraordinary session.

Following last month's House of Councillors election, lawmakers gathered to deal with procedural matters, including choosing a new president and vice president, as well as chairs of standing committees.

Emperor Naruhito, who ascended the throne in May, took part in a Diet opening ceremony for the first time.

Days ahead of the session's opening, the Diet carried out renovations to improve barrier-free access for Yasuhiko Funago, who has Lou Gehrig's disease, a condition also known as amyotrophic lateral sclerosis, and Eiko Kimura, who has cerebral palsy, both of whom won their seats in the July 21 election.

Funago, 61, and Kimura, 54, ran in the election as candidates for Reiwa Shinsengumi, an anti-establishment political group founded in April by actor-turned-politician Taro Yamamoto.

As Funago, who has had no limb mobility since 2008, and Kimura use larger-style wheelchairs, the upper house removed three seats near a doorway of its chamber on Sunday to create enough space for them to attend plenary sessions.

"I feel a mix of expectation and anxiety," said Kimura, who was welcomed by more than 100 supporters at the main gate of the Diet building in the morning.

"I appreciate the Diet's consideration (for promoting barrier-free access). I want to tackle employment issues of the disabled that still have a long way to go," she added.

Funago said he wants to "live up to expectations of everyone" through an aide who vocalized his words by tracking his eyes as they scanned a transparent sheet containing a character matrix.

Aides cast ballots in votes on the new upper house leaders on behalf of the two wheelchair-using lawmakers. 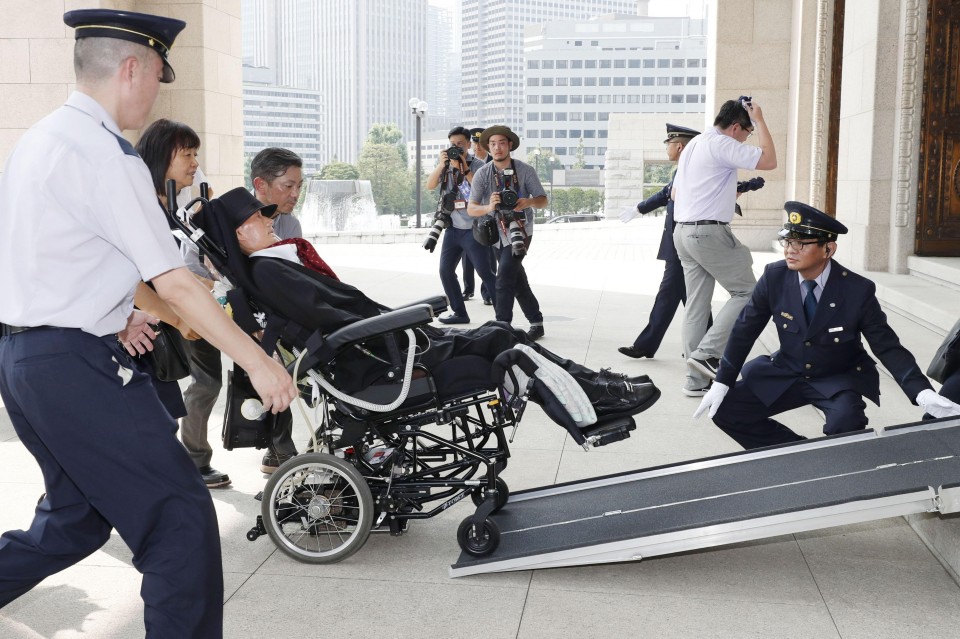 Japan's parliament has previously accommodated lawmakers with disabilities. But Funago and Kimura, who has had cerebral palsy since she was 8 months old, have to depend on caregivers to get around as their disabilities are considered more severe than those of their predecessors.

Lawmakers are unlikely to deliberate on any bills during the session through Monday. The next time they will have the opportunity will be another extraordinary Diet session to be convened in the fall.

Prime Minister Shinzo Abe will likely reshuffle his Cabinet and the Liberal Democratic Party's executive lineup in September, possibly before the next parliamentary session, according to government sources.

In the July 21 election, the LDP and its junior coalition partner Komeito scored a solid win and an upper house president is customarily chosen from the ruling party.

Santo, 77, was re-elected last month for her eighth sixth-year term -- a record in the upper house -- and became the second female president of the chamber following Chikage Ogi, who served between 2004 and 2007.

Viewed as one of the pioneers of women's political participation in Japan, the former actress was first elected to the upper house at age 32 in 1974 and later served as chief of the now-defunct Science and Technology Agency.