At the base of Uluru are signs in seven languages requesting people reconsider climbing Australia's most iconic natural landmark, once known as Ayers Rock.

These briefly outline the beliefs of the Anangu -- the indigenous, traditional owners of Uluru and its surrounding lands -- who see the rock as a sacred space, roughly equivalent to a church or temple.

Numerous safety warnings -- reminding people to stay hydrated in the desert sun and keep on the well-worn track to the near-350-meter-high summit -- are also written and translated for local and international visitors alike.

However, from Oct. 26, the polite request will be replaced with a total ban on climbing.

In the lead-up to the ban, visitor numbers to Uluru-Kata Tjuta National Park have surged as tourists get their once-in-a-lifetime experience before time is up. 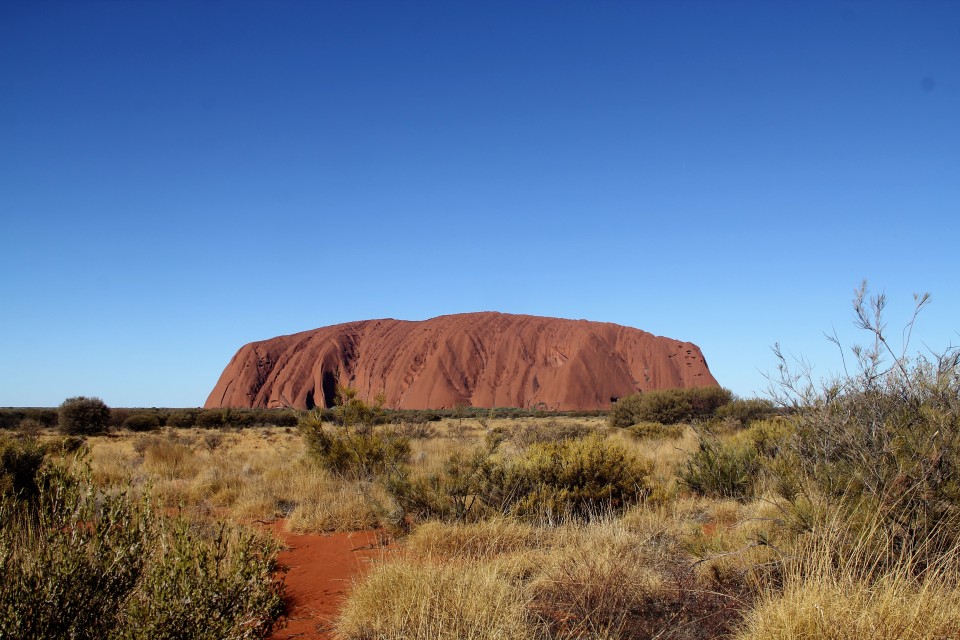 "We've had the highest visitor numbers in more than 13 years," said Steven Baldwin, manager of park operations and visitor services at the national park.

Entry-gate figures from 2018 show a more-than 20 percent increase, following the announcement by the board of management in November 2017 that the climb would be permanently off-limits.

"Anecdotally, visually, we can see there's a massive increase of people who want to legally climb, and that's to be expected," he said.

Baldwin says Japanese tourists are among the most frequent visitors to the park, and some of the most enthusiastic climbers.

"Clearly the climb is popular with the Japanese market. I've seen it, I've been down there and seen the buses turn up and the Japanese jump off and start the climb," the 50-year-old said. "They love to conquer it."

A 42-year-old office worker visiting Uluru from Japan's northern island of Hokkaido told Kyodo News he had wanted to climb the rock since he was a student.

"When I heard climbing will be banned, I wondered if I shouldn't go, but I felt it would make a good memory," said the man, who asked not to be named.

"I came as part of a tour so I only had an hour, but I climbed partway. I was so moved by being able to set foot in such an incredible place."

Kenji Tatsuta, assistant manager at a hotel within Ayers Rock Resort, just outside the national park, said occupancy has remained above 90 percent since the 2017 announcement.

"It does seem many Japanese people, regardless of age or gender, want to climb," the 46-year-old Japan Desk supervisor said.

Climbing Uluru has become controversial since the land surrounding the monolith was handed back to its traditional owners in 1985. Today, the park is jointly managed by them and the Australian government. 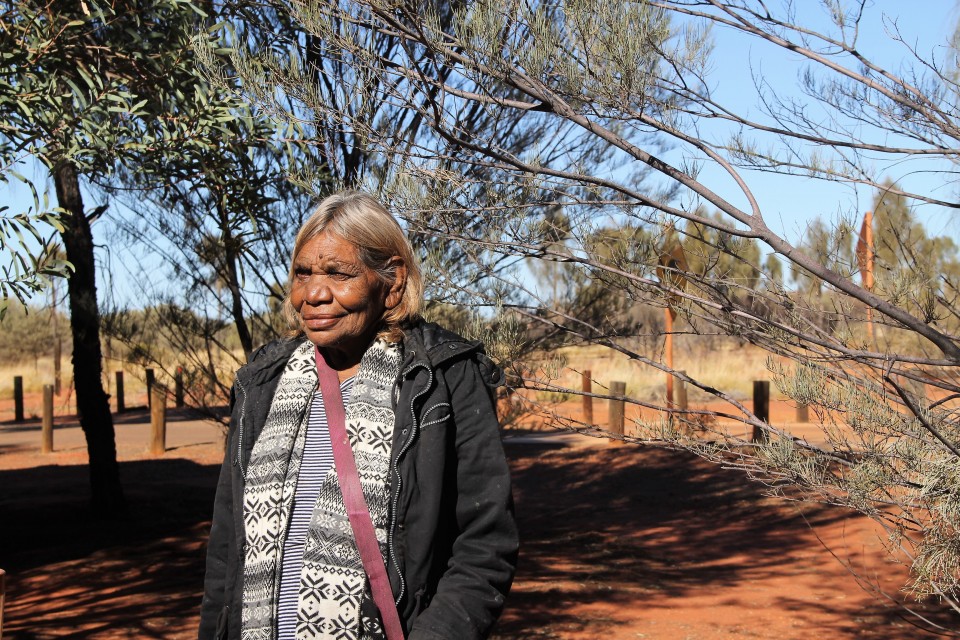 "Because of 'tjukurpa,' that's why we look after this rock," said Anangu woman Daisy Walkabout, referring to the laws and religious beliefs that form the foundations of Anangu culture.

Sometimes translated into English as The Dreamtime, tjukurpa also refers to the creation period when ancestral beings, often in the form of native animals, are said to have forged the Australian landscape.

Aboriginal Australians retell their creation stories by reading markers in the physical landscape, including the caves and waterholes of Uluru, which is why the rock is so culturally significant.

"There's a soul (in the) rock. Big dreaming. Good for (a) walk (around the base) but not allowed to climb the rock," Walkabout, a former park ranger said.

Upon hearing the Anangu relationship with Uluru, German tourists Kasia Wojtczak and Erdem Bastanoglu chose to walk around the base with their two children instead of attempting the climb.

"We respect the culture and the religion of the people here. And it is not necessary to climb. It's beautiful to view from the bottom," Wojtczak said.

"There's a climb to the roof of St. Peter's Basilica (in Vatican City), but I would not do that either for the same reason," said Bastanoglu, who coincidently enjoys rock climbing as a hobby.

The park's decision to end climbing was also made on safety grounds.

More than 35 people have died while attempting to climb Uluru, with many more injured or trapped after straying from the path.

Park manager Baldwin was first on the scene at the most recent fatality at Uluru, when an elderly Japanese man had a heart attack while attempting one of the steepest parts of the track in July 2018.

Baldwin said the Anangu feel a sense of responsibility to ensure people are safe on their lands, and feel great sadness when anyone is injured or dies.

"It's like if somebody visits your house and they trip over and break their arm, you would feel terrible," he explained.

"Whenever someone gets injured or trapped or dies, they (Anangu people) feel really sad. I've seen it, it's not just words. They are physically and visibly upset."

The climb is already regularly closed due to rain, high winds, and if the temperature is forecast to reach 36 C or above. During the hot central Australian summer -- when the mercury can reach 45 C -- the climb is closed every day from 8 a.m. 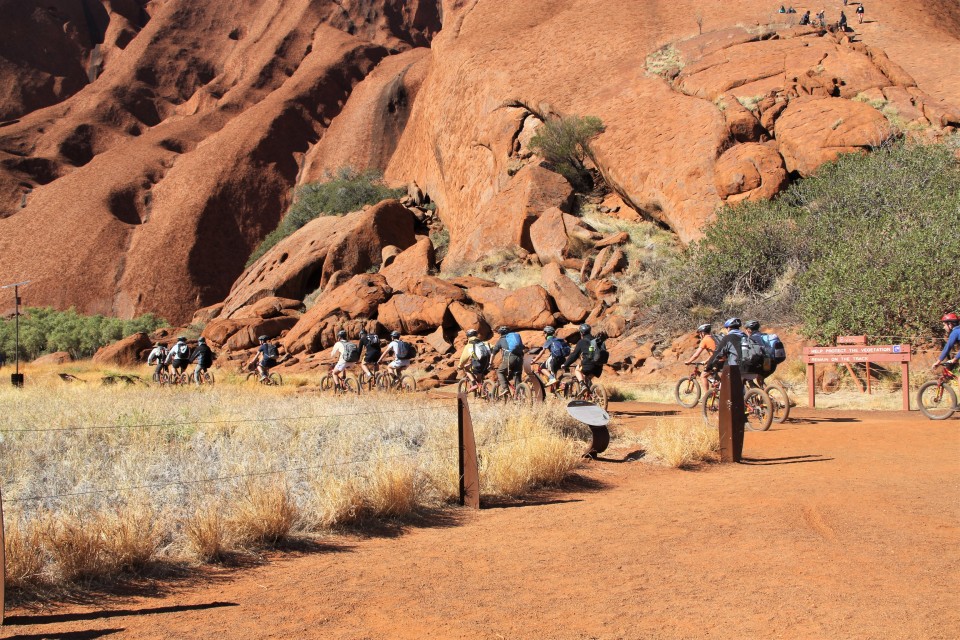 And it is for these reasons that Baldwin believes visitor numbers will not fall too dramatically once the climb is closed.

"The fact is, you don't have to climb to have a good holiday," he said, explaining there are more activities on offer within the park than ever before, including bike tours and a stargazing barbecue.

"I've got 30 years' experience in the tourism industry, I don't think there will be a massive decrease. I'm not concerned at all."

Hotel manager Tatsuta, who supports the climbing ban, pointed out visitors can enjoy nearby Kata-Tjuta -- a large group of rocks which includes a steep and challenging walk between the formations.

"The attraction of this place comes from being able to experience such incredible nature," he said.

"I hope people fall in love with the nature and come back, and I hope first-timers come visit, too."