A group from Japan took part in the WorldPride march in New York City on Sunday to commemorate the 50th anniversary of the Stonewall riots that sparked the modern LGBT movement in the United States.

About 250 people from Tokyo Rainbow Pride (TRP) joined the parade, which the organizer said drew a record 150,000 participants.

Donning Junko Koshino-designed "happi" -- a traditional Japanese coat often worn at festivals -- they marched beside and on two Gray Line double-decker buses with banners that read "COME AND JOIN US! 2020 TOKYO RAINBOW PRIDE."

Aside from joining in the jubilation at the annual celebration, the marchers from Japan were advocating for stronger LGBT rights in their home country.

In Japan, same-sex marriage is not recognized, but a number of municipalities have issued non-legal binding "partnership certificates" since 2015, with Ibaraki Prefecture becoming the latest to do so Monday. 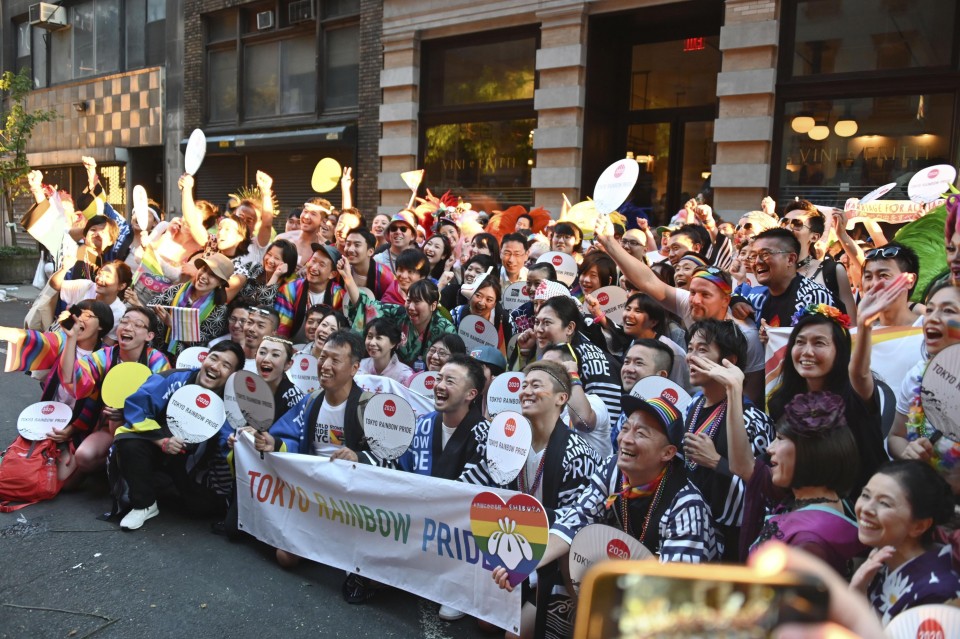 Although the certificates are not equal to marriage, Fumino Sugiyama, 37, a co-representatives of the TRP, said it is a step forward for LGBT rights in Japan.

Among the spectators of the New York parade were Angie Merry, 47, and her wife Rachel Merry, from Wisconsin, who forwent their annual Minnesota pride trip for the WorldPride March to commemorate the 50th anniversary of the Stonewall riots.

Angie, who grew up in the 1980s when coming out as gay was met with disapproval, said the feeling of "pride" had overtaken her because the march was a safe place to express herself.

"It means so much because there were so many years where people were going around oppressed, persecuted simply because of the person they choose to love. It is that simple."

She said it is "not fair" that same-sex marriage is not legal in Japan. "Everyone deserves that human emotion of love and why shouldn't you be able to tell the world legally and have the same benefits," she said.

Shinya Yamagata, another TRP co-representative, said it was his dream to bring the Japanese group to New York. As he was waiting to leave for the start line he said he was overwhelmed by the atmosphere: the floats, the amount of participants, and the rainbow flags on everything from shirts to business windows.

The first New York City Pride March on June 28, 1970 was dubbed the Christopher Street Liberation Day to commemorate the riot that followed a routine police raid on a mafia-run illegal gay bar in the city's Greenwich Village a year before.