Japan's Abe denounces attacks on tankers near Strait of Hormuz

Japan "resolutely denounces" attacks on two oil tankers near the Strait of Hormuz, regardless of who is responsible for them, Prime Minister Shinzo Abe said Friday after speaking with U.S. President Donald Trump by phone.

Abe, who returned to Tokyo in the morning from a two-day visit to Tehran, did not name any country suspected of being behind the attacks, while the United States has already pointed fingers at Iran.

Amid escalating tensions in the Middle East, Abe instead said Japan will work closely with the United States and the international community for peace and stability in the region.

"I believe that all parties concerned should exercise restraint to prevent from causing unforeseen situations and refrain from any action that could escalate tensions," Abe also told reporters at his office in Tokyo shortly after the phone conversation that lasted about 30 minutes.

While Thursday's attacks on the tankers, including one operated by a Japanese company, have raised fears of a new confrontation between Washington and Tehran, Abe said, "U.S. President Trump expressed appreciation for my visit to Iran and efforts (toward easing tensions)."

According to the White House, Trump thanked Abe for his effort to facilitate communication with Iran. They discussed Abe's recent trip to Tehran and the circumstances surrounding the attacks on the two tankers.

The two leaders also touched on negotiations for a Japan-U.S. trade agreement and Trump's visit to Japan for a Group of 20 summit slated for June 28 and 29 in Osaka, it said in a brief statement. 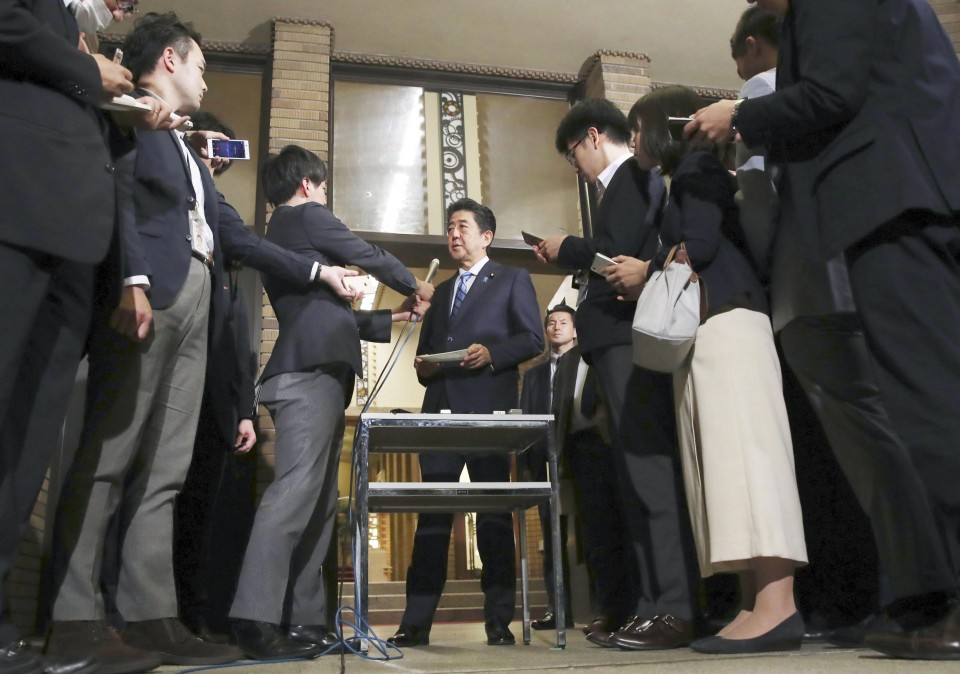 The United States has released footage purportedly showing an Iranian Islamic Revolutionary Guard Corps patrol boat removing an unexploded mine from the Japanese-operated Kokuka Courageous in the Gulf of Oman, one of the world's most important sea lanes. But Iran has denied the allegations.

U.S. Secretary of State Mike Pompeo said Thursday that Washington's judgment is based on "intelligence, the weapons used, the level of expertise needed to execute the operation, recent similar Iranian attacks on shipping, and the fact that no proxy group operating in the area has the resources and proficiency to act with such a high degree of sophistication."

During his visit to Iran, Abe sought to broker dialogue between the two foes, tapping into Tokyo's traditionally friendly ties with Tehran.

"I do not consider Trump as a person worth exchanging any message with and I have no answer for him, nor will I respond to him in the future," Khamenei, who ultimately decides on Iran's policy direction, told Abe, who became the first sitting Japanese prime minister to visit the country in 41 years.

Khamenei also said in a statement, released after meeting with Abe, that Iran believes "problems will not be solved by negotiating with the United States, and no free nation would ever accept negotiations under pressure."