Tokyo reluctantly accepted Friday the International Olympic Committee's abrupt decision to move the marathon and race-walking events at the 2020 Games to Sapporo from the Japanese capital.

"After considering the importance of the success of the Olympics, though we still do not agree we will not obstruct the decision made by the IOC, which has the authority to have the final say," Tokyo Gov. Yuriko Koike said. "If I have to say so, it is a decision reached without an agreement."

Her remarks were made at the third and final day of a four-party meeting between the Tokyo metropolitan government, the IOC, the Tokyo organizing committee and the Japanese government, and the end of a much-publicized feud over the decision out of concerns about heat and humidity.

Koike, who had vigorously opposed the IOC's Oct. 16 announcement to relocate the road events to the northern city of Sapporo, said she received an email from IOC President Thomas Bach on Friday morning proposing a post-Games "Olympic celebration marathon" in Tokyo.

"He said he feels the need for the IOC to show sincerity to the people of Tokyo. Of course I'll be in touch with the IOC to discuss details," Koike said.

Earlier, Koike criticized the IOC's "unprecedented" decision that was made without consulting the city first, and Sapporo Mayor Katsuhiro Akimoto said he was not contacted by anyone from the IOC before the announcement. 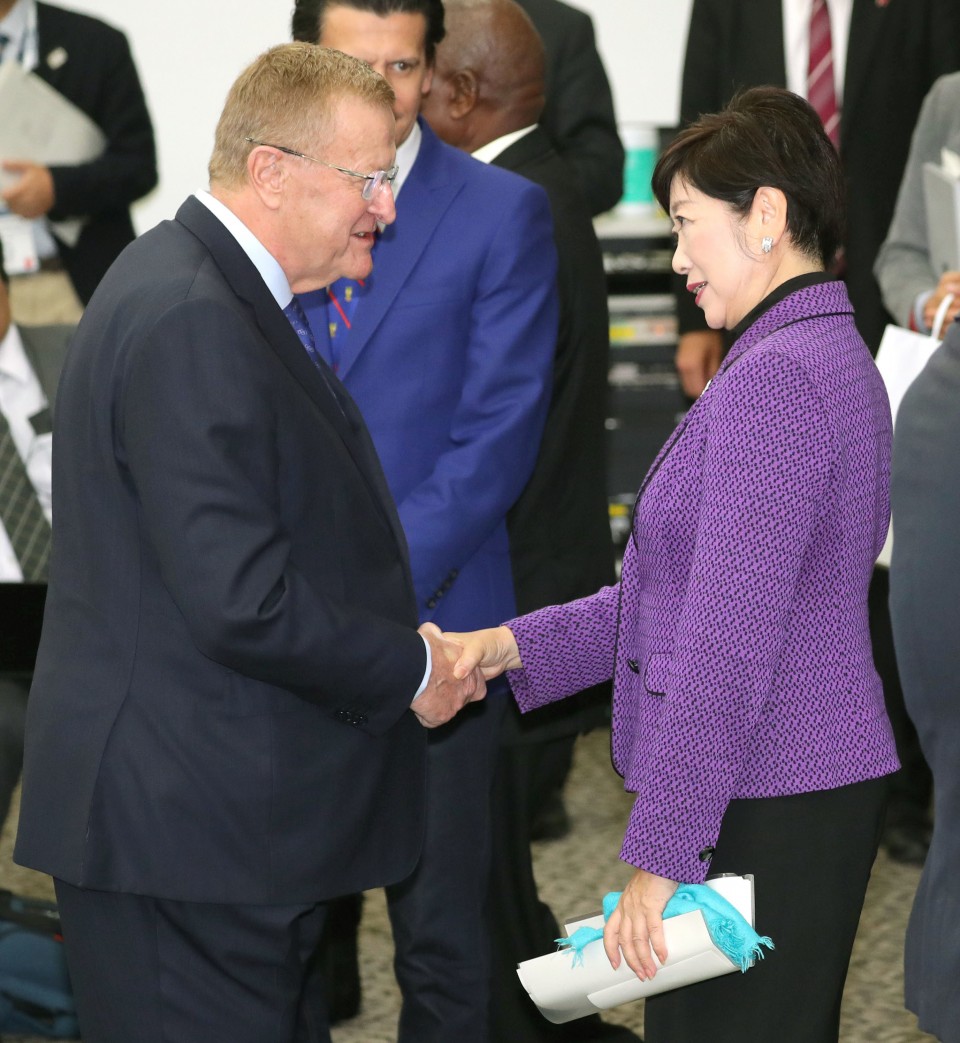 (Koike shakes hands with Coates before the four-party meeting)[Pool]

A day after the announcement, Coates apologized for the "surprise," saying the IOC's decision was influenced by the disastrous world athletics championships in Doha last month, where many runners failed to finish the women's marathon held in extreme heat and humidity.

Coates opened Friday's meeting by confirming that the IOC and Tokyo have agreed on four key points, the first of them being the mutual understanding that the IOC has the authority to make the decision on the venue change.

The two sides also agreed that Tokyo will not bear the costs for the venue change. The IOC will not move any other events out of Tokyo, Coates said.

Olympic officials said the plan to move the events is aimed at sparing athletes from having to compete in Tokyo's extreme heat and humidity in early August.

The move to Sapporo will make the Olympic marathons the first to be held outside the host city.

Mori applauded Koike's decision and called it "wise," saying "I would like to express my deepest respect."

At a press conference after the meeting, Coates said he sympathized with people in Tokyo, particularly children, who would be disappointed by the relocation of the marathon, but said the move was about putting athlete safety first.

He reiterated that the IOC was determined to avoid a repeat of the calamitous scenes at the Doha world championships, where 28 of the 68 starters in the women's marathon dropped out, many with severe heat exhaustion, despite the race having been held in the middle of the night.

"Sure we want to have good memories (of the marathon) for the children, but we also didn't want bad memories," the Australian said.

"With all of the good work that's gone into your preparations, we didn't want Tokyo being remembered...by some of the scenes we saw in Doha. So, health of the athletes, and good memories, were very much in mind for us."

Relaying a message from Bach, he said the decision on moving the road races had to be made quickly in order to give athletes long enough to modify their preparations.

Following an inspection of games venues, Coates said he was "very impressed" with the New National Stadium, while also praising the Oi Hockey Stadium which has been constructed for the Olympics.

"The permanent grandstand is outstanding. You're right on top of the (field) and it's going to be a wonderful legacy for hockey in this country."

He said the IOC had "no worries" about all venues being completed in time for the July 24 to Aug. 9 Olympics.

At a separate press conference, Koike said the Tokyo government had considered legal action to prevent the marathon being moved, but did not proceed after being advised it was unlikely to win its case.