The western Japan city of Kobe on Tuesday marked the 28th anniversary of the magnitude 7.3 earthquake that took 6,434 lives, with its first ceremony in three years at a pre-pandemic scale.

Residents and victims' families observed a moment of silence at 5:46 a.m., the same time the Great Hanshin Earthquake struck the port city in Hyogo Prefecture and neighboring areas on Jan. 17, 1995. 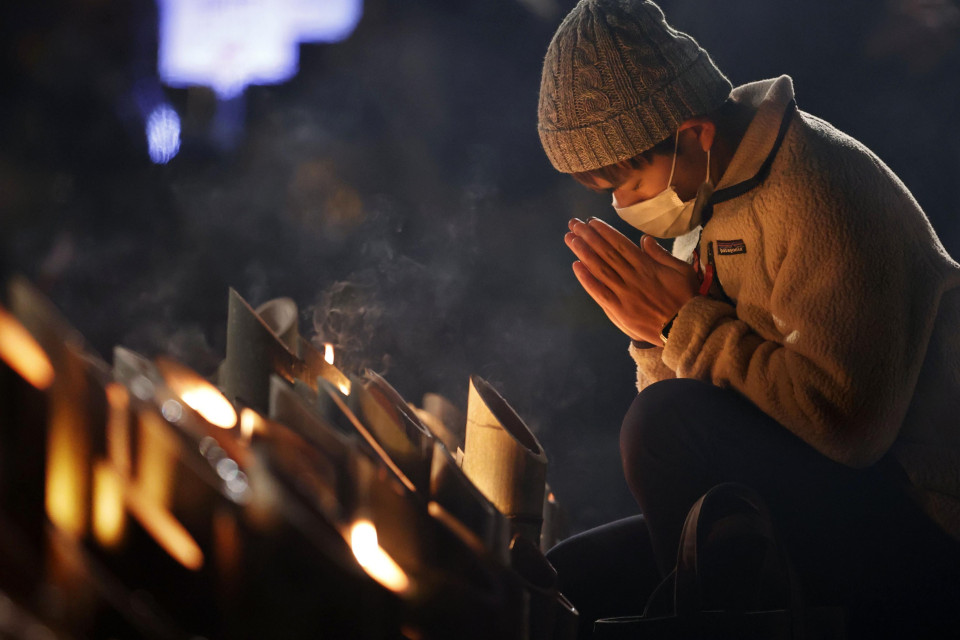 A resident prays by lanterns in a park in Kobe, Hyogo Prefecture, on Jan. 17, 2023, the 28th anniversary of the Great Hanshin Earthquake. (Kyodo)

The ceremony, which came after memorials were reduced in scale or canceled in 2021 and 2022, saw participants light thousands of candles forming "1.17, 1995," the date of the disaster, and this year's message, "musubu," meaning to be bound together.

Under pandemic limits, commemorations at Higashi Yuenchi, a park in Kobe's Chuo Ward, had used around half the number of candles at a normal-scale event. This year's pre-dawn event saw some 10,000 bamboo and paper lanterns lit to mark the anniversary. 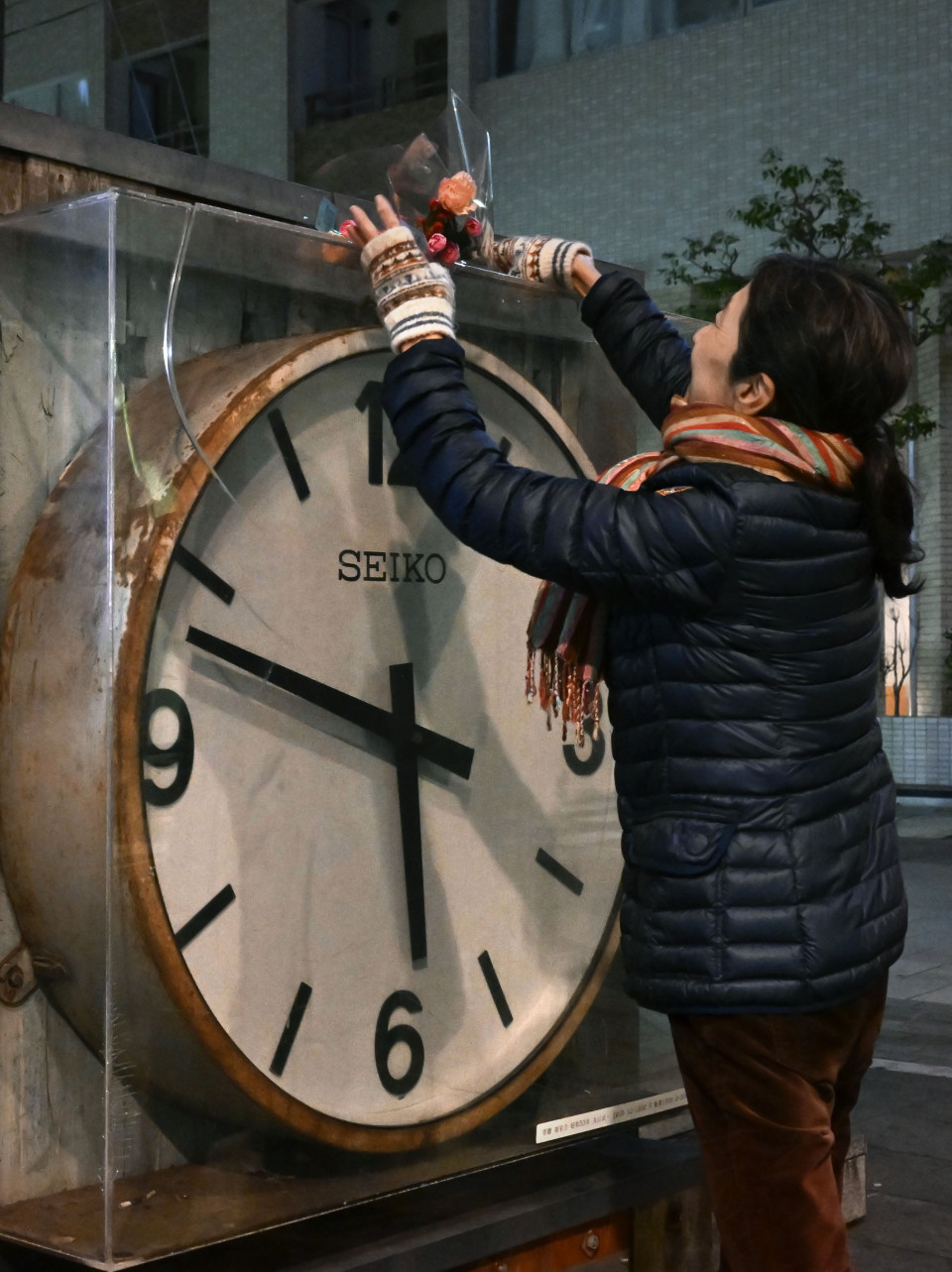 A woman offers flowers in Nishinomiya in Hyogo Prefecture on the early morning of Jan. 17, 2023, on top of a clock that stopped working when the 1995 Great Hanshin Earthquake struck the western Japan city and its vicinity 28 years ago. (Kyodo) ==Kyodo

Masashi Ueno, who lost his 20-year-old daughter Shino in the quake, spoke at the park on behalf of the victims' relatives. Reflecting on the pain of Shino's death at the very start of her adult life and the shock of finding her body, Ueno said, "We must make use of the lessons learned from the disaster."

Others like Noriko Morisaki, 55, attended local events such as a memorial event held by residents in Kobe's Nagata district, where more than 900 people died in the disaster. "I've been waiting for today because, with the coronavirus, there weren't any memorial events," she said.

Elsewhere, Kiyoko Takeuchi, 50, whose parents' home in Kobe's Kita district was affected by the disaster, said she had come to pray "with feelings of admiration for how people here have rebuilt their lives."

With nearly 30 years passed since the quake struck and the scaling down of memorial activities in recent years, the city and residents face increasing challenges in passing on the memory and lessons learned from the disaster to future generations. 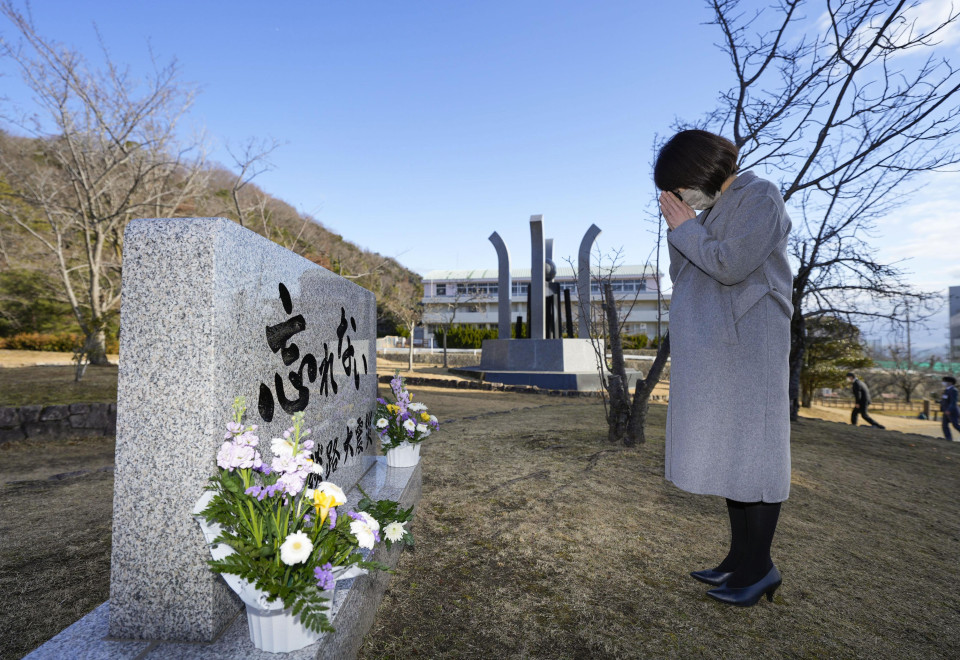 A woman prays in front of a monument commemorating the victims of the 1995 Great Hanshin Earthquake in Takarazuka in Hyogo Prefecture on Jan. 17, 2023. (Kyodo)

Noting that an increasing number of residents were not born when the earthquake struck, Kobe Mayor Kizo Hisamoto said the city will work to "ensure the experiences and lessons of the quake do not fade" and that they are passed on to the next generation.

During a memorial event hosted by organizations such as the Hyogo prefectural government, Hyogo Gov. Motohiko Saito stressed the importance of vigilance in his remarks, saying, "We must at all times work to prepare for the next natural disaster."

At a press conference in Tokyo, Chief Cabinet Secretary Hirokazu Matsuno said the knowledge and experience from the Great Hanshin Earthquake would be "faithfully carried on and used to ensure a full response when disaster strikes in the future." 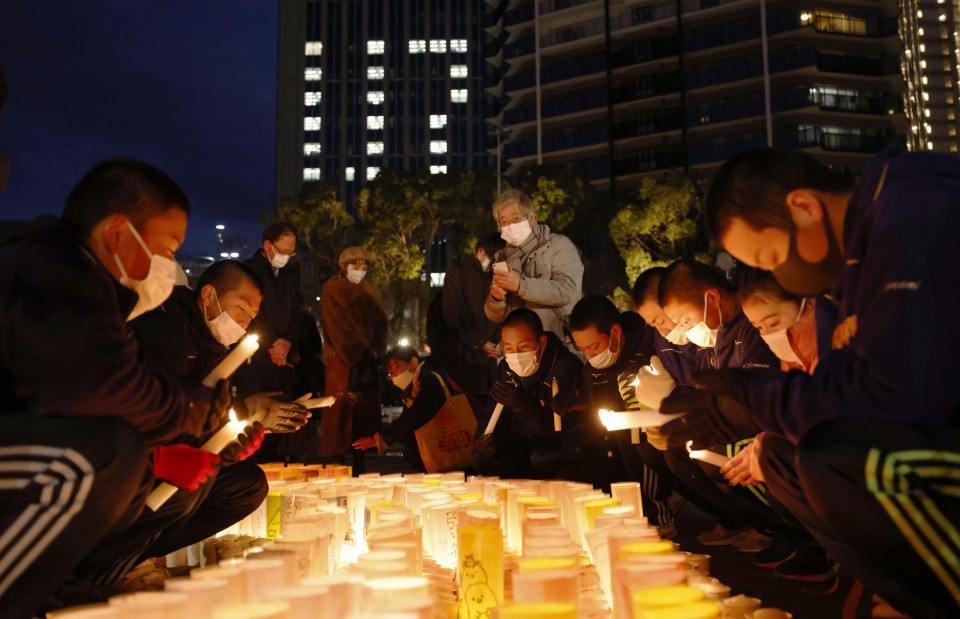 People offer silent prayers besides lit up lanterns at a park in Kobe, Hyogo Prefecture, on Jan. 16, 2023, during an event marking the 28th anniversary of the Great Hanshin Earthquake, which struck the western Japan city and its vicinity killing more than 6,000 people. (Kyodo) ==Kyodo

The earthquake was the first in the country to measure at the maximum of 7 on Japan's seismic intensity scale, which the country's weather agency says would make it impossible to remain standing or move without crawling.

The powerful quake damaged around 640,000 homes, including about 104,000 that were destroyed. The extent of the damage from the earthquake spurred changes to the country's disaster response and earthquake resistance measures for construction.

In addition to the 6,434 killed in the disaster, the quake injured around 44,000 others and forced as many as 310,000 people to evacuate to emergency shelters.

Japan gov't holds disaster drill, scaled back due to COVID-19