Japanese Prime Minister Fumio Kishida on Saturday sought stronger cooperation from ASEAN members in dealing with North Korea's missile and nuclear threats, as he kicked off his eight-day Southeast Asia tour for a series of leaders' meetings.

At a summit of "ASEAN-plus-three" -- the Association of Southeast Asian Nations, Japan, China and South Korea -- in Phnom Penh, Kishida told his counterparts that Pyongyang's recent barrage of ballistic missile launches are a "clear and serious challenge to the international community and can never be overlooked," according to the Japanese Foreign Ministry. 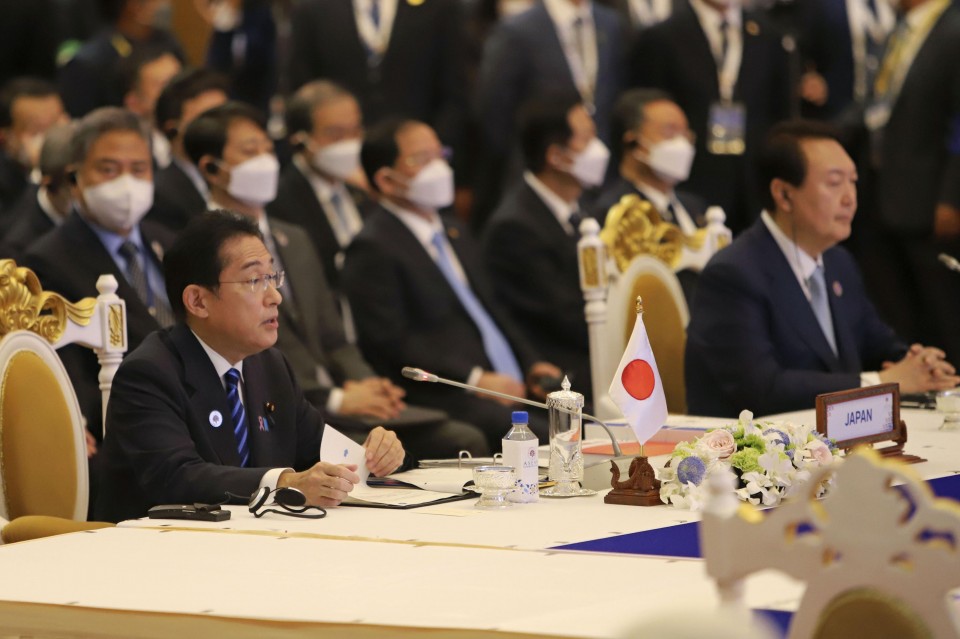 Japanese Prime Minister Fumio Kishida (front, L) speaks at a meeting with his counterparts from the Association of Southeast Asian Nations plus China and South Korea on Nov. 12, 2022, in the Cambodian capital of Phnom Penh. (Kyodo) ==Kyodo

Kishida stressed that the international community must take united action "toward the complete, verifiable and irreversible dismantlement" of North Korea's weapons of mass destruction and ballistic missiles in accordance with U.N. Security Council resolutions, the ministry said.

Some other nations also expressed worries over the raft of ballistic missile firings this year by North Korea and referred to the importance of denuclearizing the Korean Peninsula, according to the ministry.

From China, which has considerable influence over North Korea, Premier Li Keqiang attended the meeting, pointing out Asia has become a global growth engine and peace and stability are needed. Concern has been growing that Pyongyang could carry out its seventh nuclear test, the first since September 2017.

The Cambodian capital is the first destination for Kishida, who will also attend summits of the Group of 20 major economies in Indonesia, and of the Asia-Pacific Economic Cooperation forum in Thailand, during his trip through Nov. 19.

As for Russia's invasion of Ukraine, Kishida was quoted by the ministry as saying attempts to unilaterally change the status quo by force are unacceptable anywhere, including Asia.

At the meeting's outset which was open to the media, South Korean President Yoon Suk Yeol said the war in Ukraine has worsened "the crisis of food and energy security" across the world. 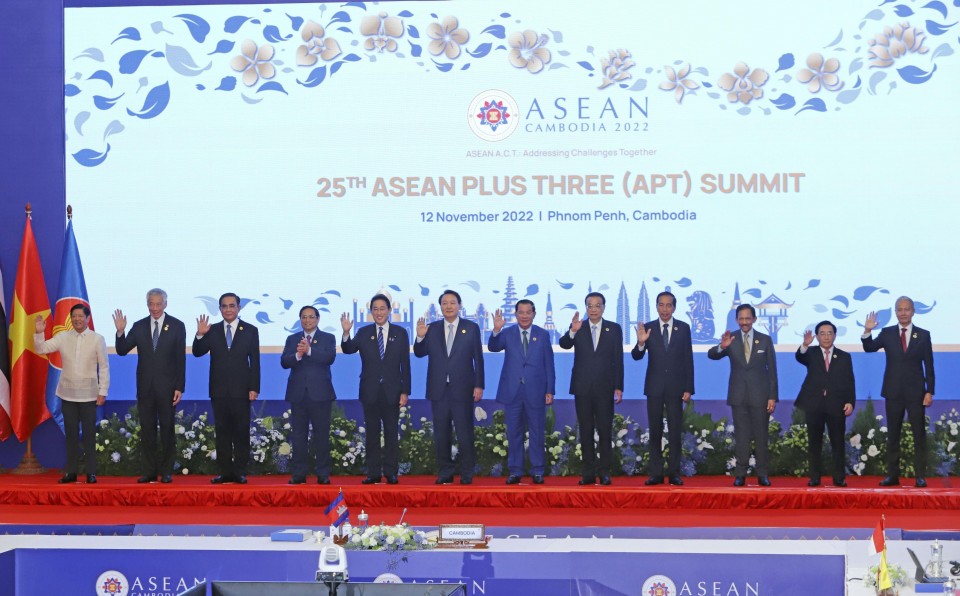 Leaders from the Association of Southeast Asian Nations plus China, Japan and South Korea pose for a group photo at the beginning of their meeting on Nov. 12, 2022, in the Cambodian capital of Phnom Penh. (Kyodo) ==Kyodo

The Group of Seven industrialized nations including Japan, along with like-minded nations such as South Korea, have maintained a series of economic sanctions on Russia over its invasion that started in late February.

Meanwhile, China has refrained from joining the sanctions to isolate Russia. Among ASEAN members, only Singapore has joined the measures, while most others, considering their relationships with Russia, have avoided criticizing it by name.

At Saturday's meeting, the leaders also agreed to promote their cooperation in line with the ASEAN Outlook on the Indo-Pacific, an initiative to maintain peace, freedom and prosperity in the area, according to the ministry.

Specifically, the areas of cooperation include measures to prevent maritime plastic pollution and promote infrastructure investment in the region.

Separately, Kishida and his ASEAN counterparts agreed to hold a summit in Tokyo in or around December next year to commemorate the 50th anniversary of their relationship, a Japanese official said.

Cambodia has asked Myanmar, which has been under military rule since a February 2021 coup, to send nonpolitical representatives to ASEAN-linked summits, but the junta has declined.

After the ASEAN-plus-three summit, Kishida and Li spoke with each other briefly, the ministry said, at a time when relations between Tokyo and Beijing remain tense due to territorial, security and historical issues.

It marked the first in-person conversation since December 2019 between leaders of Japan and China.

Kishida expressed his intention to work together with Beijing "toward establishing a constructive and stable Japan-China relationship," while Li referred to the importance of their ties, according to the ministry.

Also on Saturday, Kishida agreed with Cambodian Prime Minister Hun Sen to upgrade their countries' relations to a "comprehensive and strategic partnership."

Kishida and Philippine President Ferdinand Marcos Jr. confirmed in a short one-on-one conversation that the two governments will arrange his early visit to Japan.