Hanashi's removal dealt a fresh blow to Kishida after another minister was sacked in late October over his suspicious links to the controversial Unification Church, with public approval ratings for the Cabinet plunging recently.

Hanashi, who assumed the post in August, told a political gathering on Wednesday that the justice minister is a "low-key" position and becomes "a top story in daytime news programs only when stamping a seal on documents of execution" in the morning. 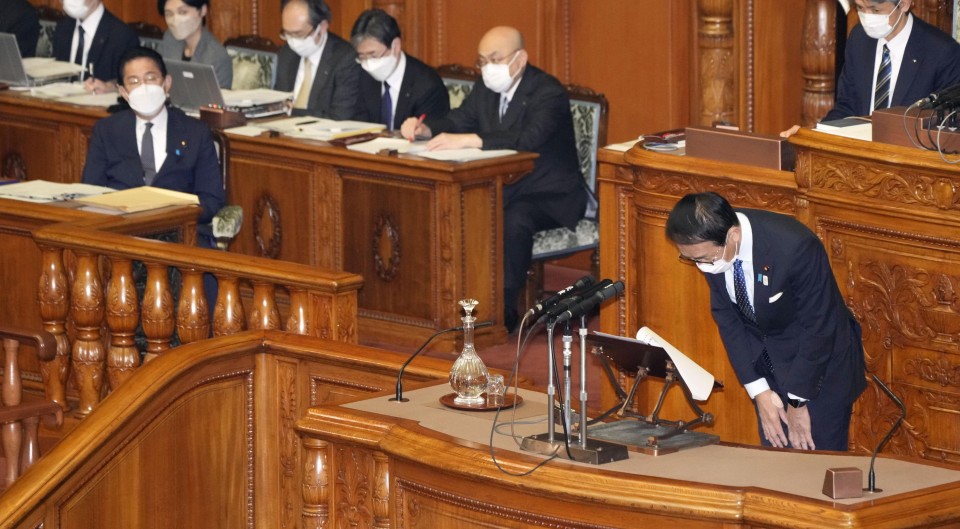 Justice Minister Yasuhiro Hanashi bows in apology during a House of Councillors plenary session in the parliament in Tokyo on Nov. 11, 2022, as Prime Minister Fumio Kishida (far L, front) looks on. (Kyodo) 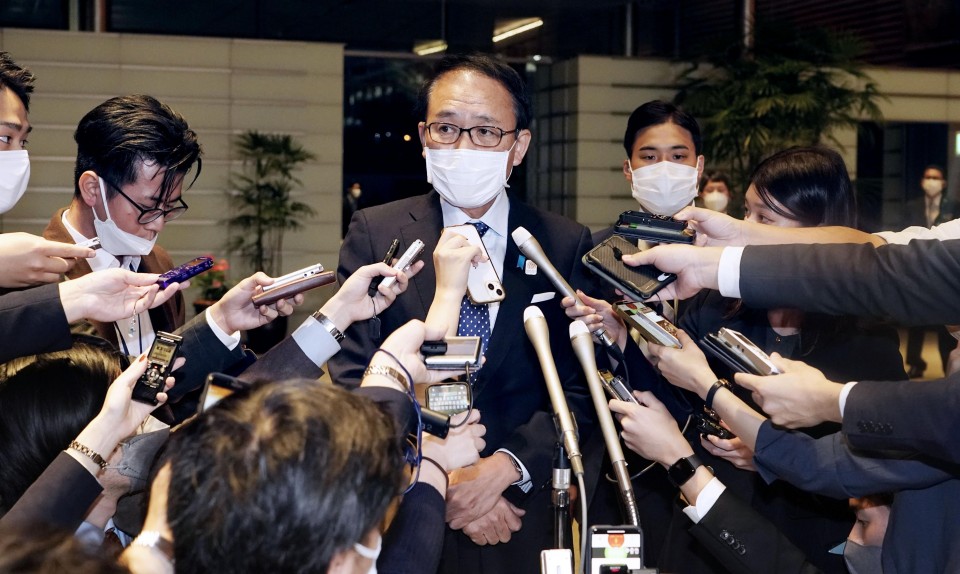 Japanese Justice Minister Yasuhiro Hanashi (C) speaks to reporters after submitting a letter of resignation to Prime Minister Fumio Kishida at the premier's office in Tokyo on Nov. 11, 2022. (Kyodo)

Later Friday, Hanashi told reporters at the prime minister's office that he had submitted a letter of resignation to Kishida, stating, "I'm sorry I treated the death penalty lightly and angered the public."

Kishida, who became prime minister in October 2021, said he has decided to pick former agriculture minister Ken Saito as the new justice minister.

The premier bashed Hanashi for having "hurt public trust," saying he has "seriously" felt responsible for appointing the lawmaker to the post.

Hanashi, who belongs to Kishida's intraparty group within the ruling Liberal Democratic Party, had also said, "Serving as justice minister won't help raise much money or secure many votes," causing critics to lambaste him for disrespecting the post.

The comments came as the approval ratings for Kishida's Cabinet have shown few signs of improvement due to revelations of ties between LDP lawmakers and the Unification Church, as well as scandals related to other ministers.

Late last month, Kishida was forced to dismiss Daishiro Yamagiwa as economic revitalization minister for his close links to the religious group, while internal affairs minister Minoru Terada has been grilled over political fund scandals.

Amid the confusion involving Hanashi, Kishida delayed his departure for Southeast Asia that had been scheduled for Friday afternoon.

Kishida is scheduled to attend Association of Southeast Asian Nations-related summits on Saturday and Sunday in Phnom Penh, and he now plans to depart from Tokyo in the early hours of Saturday.

After Hanashi's remarks were reported Wednesday evening, Kishida continued to defend the minister and reiterated he had no intention of replacing him until shortly after noon on Friday.

Akira Koike, head of the secretariat of the opposition Japanese Communist Party, said Kishida should have sacked Hanashi much earlier, adding the premier "wanted to avoid" taking responsibility for having tapped the lawmaker as justice minister.

Hanashi's controversial comments, which he retracted the following day, triggered criticism from the opposition bloc and the ruling camp. He made similar remarks about "stamping a seal" during several other meetings. 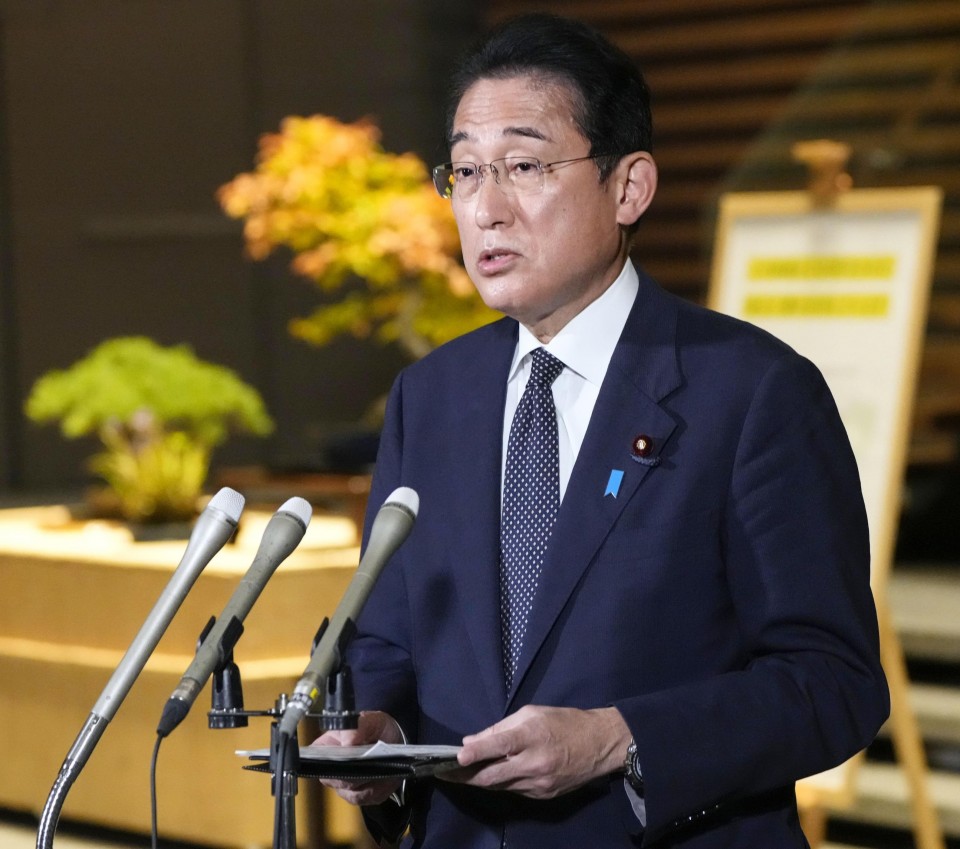 Japanese Prime Minister Fumio Kishida speaks to reporters at the premier's office in Tokyo on Nov. 11, 2022, as he dismissed Yasuhiro Hanashi as justice minister after criticism over remarks widely seen as making light of his role in authorizing executions of death-row inmates. (Kyodo) ==Kyodo 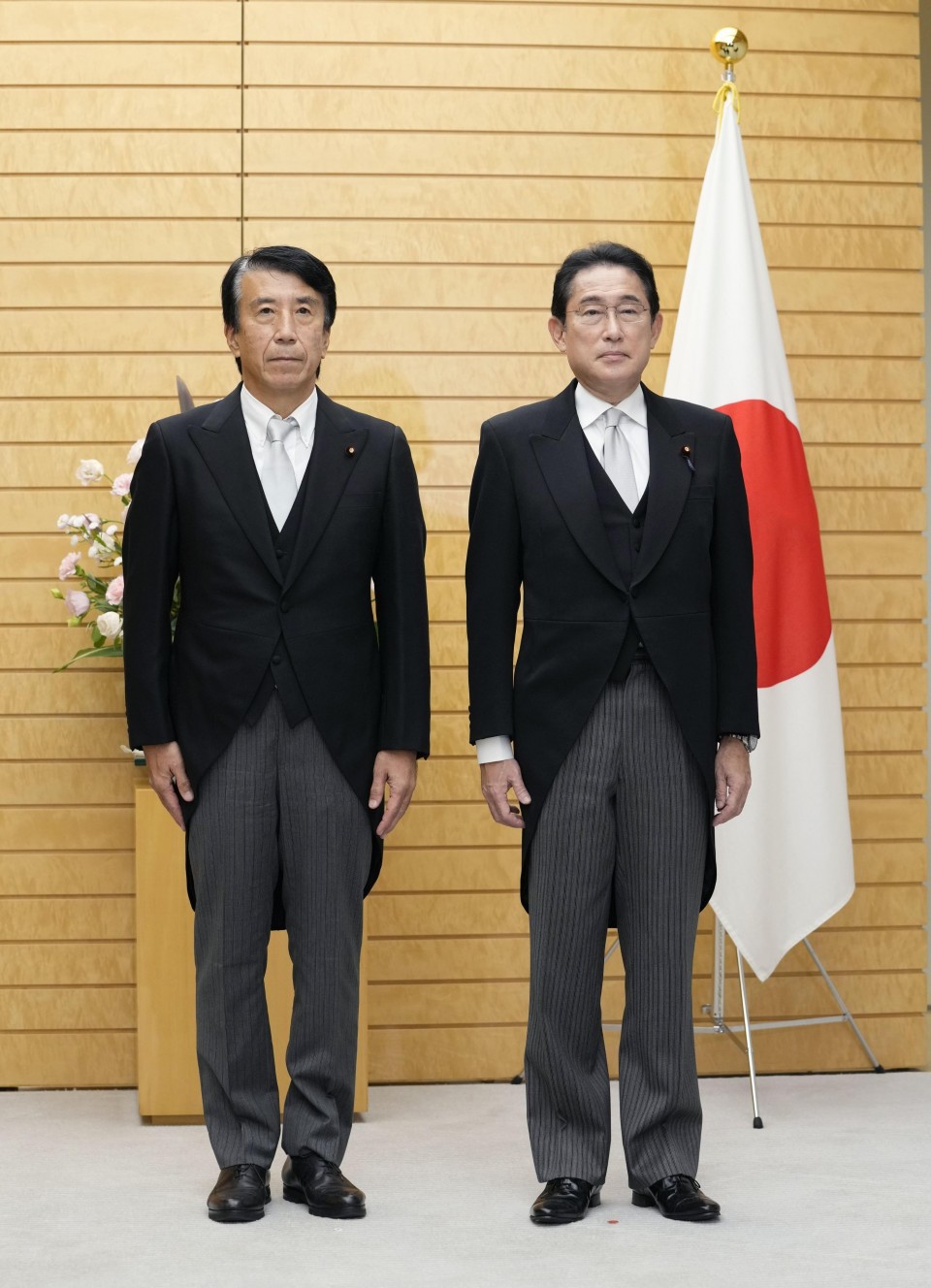 Japanese Prime Minister Fumio Kishida (R) and new justice minister Ken Saito pose for a photo at the premier's office in Tokyo on Nov. 11, 2022, after attending an attestation ceremony with Emperor Naruhito at the Imperial Palace. (Kyodo) ==Kyodo

A former police bureaucrat, Hanashi had not authorized any executions as justice minister.

Japan's capital punishment system has long come under fire, with opponents calling for greater transparency in the timing of executions as death-row inmates are typically notified just hours before or not given prior notification at all.

They also claim the procedure deprives death-row inmates of opportunities to reflect on their crimes.

Japan was among 18 countries in the world that carried out executions last year, the rights group Amnesty International said, adding that a total of 108 nations did not have the death penalty as of the end of the year.