Japanese Prime Minister Fumio Kishida appears to have failed to make the diplomatic impact he was hoping for at the just-ended Group of 20 summit to help turn around his declining political fortunes at home.

Kishida had envisioned pitching his vision of a "world without nuclear weapons" at the G-20 gathering in Indonesia, a theme behind his choice of Hiroshima as the venue for the Group of Seven summit that Japan is to host next year. 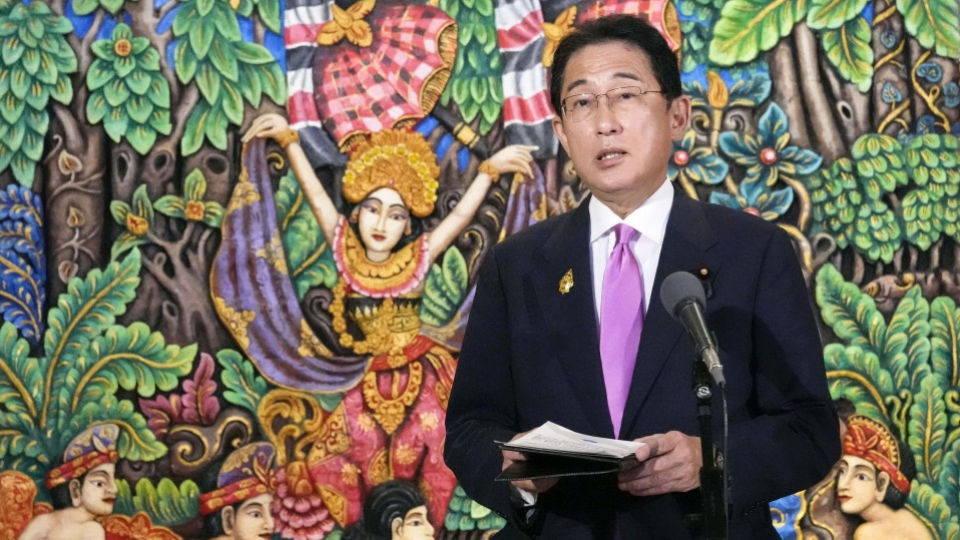 Japanese Prime Minister Fumio Kishida speaks to reporters after the conclusion of a G-20 summit on the Indonesian resort island of Bali on Nov. 16, 2022. (Kyodo) ==Kyodo

Russian President Vladimir Putin was expected to attend the two-day G-20 event until just days before it started Tuesday, and Kishida viewed the opportunity to speak out against nuclear brinkmanship in front of Putin as a way to boost Japan's presence in the international response to Russia's invasion of Ukraine, his close aides said.

The gathering came as fears mount that Moscow might use a tactical nuclear device for a limited strike in the war.

Kishida, who served as foreign minister for around five years before becoming premier in October 2021, represents Hiroshima, a western Japan city destroyed by a U.S. atomic bombing in August 1945, in the House of Representatives.

With the approval ratings for his Cabinet recently nearing what is widely seen as the "danger level" of 30 percent, due in part to several scandals involving his ministers, Kishida hoped effective diplomacy could prop up his public support, the aides said.

Within the ruling Liberal Democratic Party, headed by Kishida, there were hopes that his experience in the foreign-policy field would help him in his bid to shore up his administration.

The prime minister "has to promote various policies" such as security through overseas trips, Toshiaki Endo, chairman of the LDP General Council, the party's decision-making body, said last week. "We should unite to support the Kishida administration to satisfy the public."

Kishida's hopes for a diplomatic win, however, were spoiled when Russia sent Foreign Minister Sergey Lavrov to Indonesia on behalf of Putin.

In the end, with a missile hitting Ukraine's western neighbor Poland on the same day the summit began, Japan was unable to make an impression amid an escalating rift between Russia and Western democracies centering on the United States over how to describe the war in Ukraine in a summit declaration.

During his stay in Indonesia, Kishida reiterated Japan "will never tolerate Russia's threat to use nuclear weapons" against Ukraine, but his remarks drew little attention from major global media outlets, a Japanese government source said.

"I think Japan was out of the spotlight at the G-20 summit. I cannot say the prime minister yielded results," the source added.

Kishida left Japan last Saturday for Southeast Asia for a series of international gatherings including the G-20, with his justice minister having just resigned after coming under fire for remarks seen as making light of his role in authorizing executions. 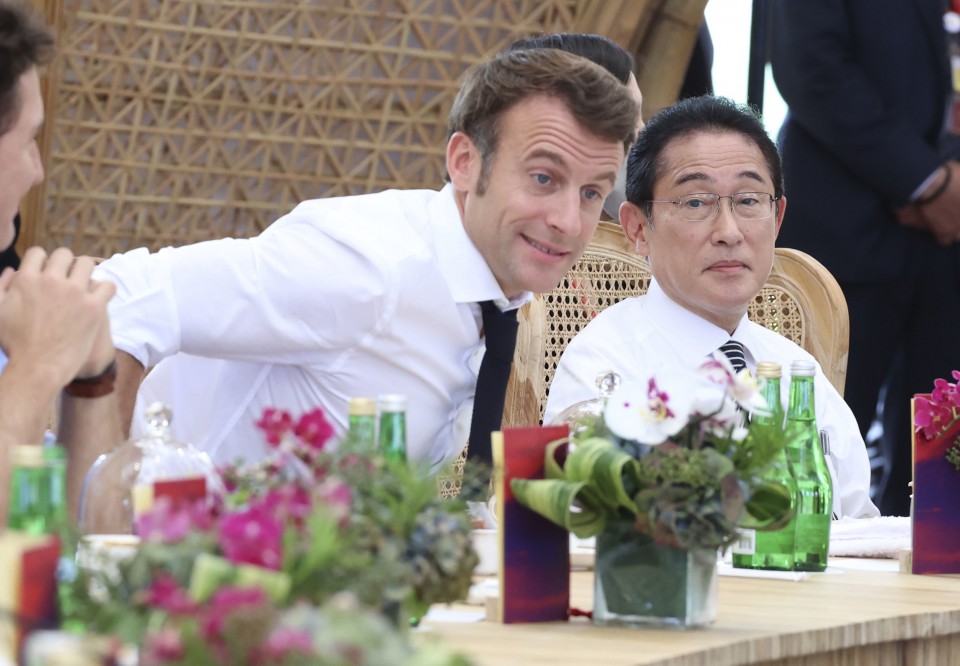 Yasuhiro Hanashi, a lawmaker belonging to Kishida's intraparty group within the LDP, had said a justice minister only drew attention when "stamping a seal" on execution orders, calling it a "low-key" post. 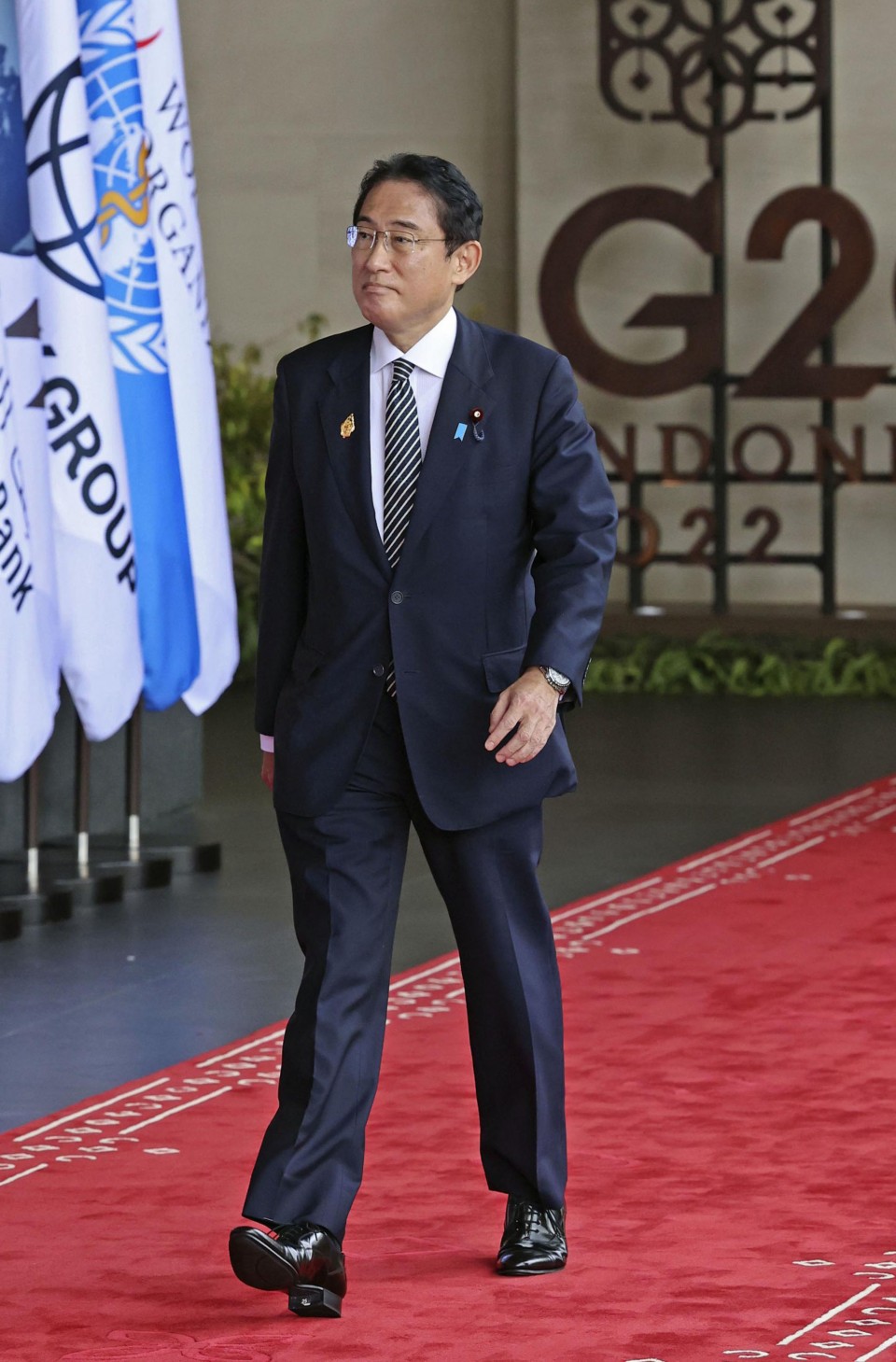 Japanese Prime Minister Fumio Kishida arrives at the venue of a G-20 summit on the Indonesian resort island of Bali on Nov. 15, 2022. (Pool photo) (Kyodo) ==Kyodo

Because of the effective dismissal Friday, Kishida delayed his scheduled departure for Cambodia, forcing him to cancel some official bilateral summits on the sidelines of Association of Southeast Asian Nations-related meetings.

Former Foreign Minister Katsuya Okada, now secretary general of the main opposition Constitutional Democratic Party of Japan, criticized Kishida for having been "rude" to other leaders by skipping summit talks due to a domestic political issue.

After he returns to Japan on Saturday, Kishida is set to have his leadership called into question as he is grilled by opposition parties about his responsibility for appointing Hanashi as justice minister.

In late October, Kishida was also eventually compelled to bow to the opposition's calls to replace Daishiro Yamagiwa as economic minister for his close links to the Unification Church, a religious group founded by a staunch anti-communist in South Korea in 1954 that is often labeled as a cult.

Kishida's LDP scored a sweeping victory in the July 10 upper house election. The triumph seemed to promise Kishida a firm government for what was dubbed a "golden three years" free of national elections unless he chooses to dissolve the lower house.

But Tomoaki Iwai, a professor emeritus of political science at Nihon University in Tokyo, said one resignation setting off a domino effect of further resignations of Cabinet members is "certain to weaken" the basis of Kishida's administration.

Nevertheless, other analysts said Kishida may be able to regain public trust if he can successfully hold the G-7 summit in Hiroshima in May 2023, praising him for choosing the city as the venue of the gathering.

Tsuneo Watanabe, a senior research fellow at the Sasakawa Peace Foundation in Tokyo, said the world is concerned about "Russia's use of nuclear weapons against Ukraine."

"Hiroshima is the most suitable place to appeal for the maintenance of the nuclear nonproliferation regime and the ultimate goal of nuclear abolition," he added.

In their bilateral meeting on Sunday in Cambodia, Kishida won backing from U.S. President Joe Biden for holding the G-7 summit in Hiroshima, according to the Japanese government.

The White House said Biden told Kishida that he "looked forward to visiting the Prime Minister's home town of Hiroshima."

But the Japanese government source expressed uncertainty about whether Kishida would still be prime minister by the time the Hiroshima summit takes place.