Leaders of the Group of Seven industrialized nations and members of the North Atlantic Treaty Organization on Wednesday affirmed their close cooperation following a deadly missile strike in NATO member Poland's territory amid Russia's ongoing war in Ukraine.

After a hastily convened meeting on the Indonesian resort island of Bali on the sidelines of a Group of 20 summit, U.S. President Joe Biden appeared to try to tamp down tensions, telling reporters it is "unlikely" that the missile that landed in Poland was fired from Russia.

According to Poland's Foreign Ministry, a Russian-made missile hit Przewodow, a village in eastern Poland near the border with Ukraine, on Tuesday, killing two citizens. Massive shelling was taking place across Ukraine, with key infrastructure being targeted by the Russian military at the time, it said. 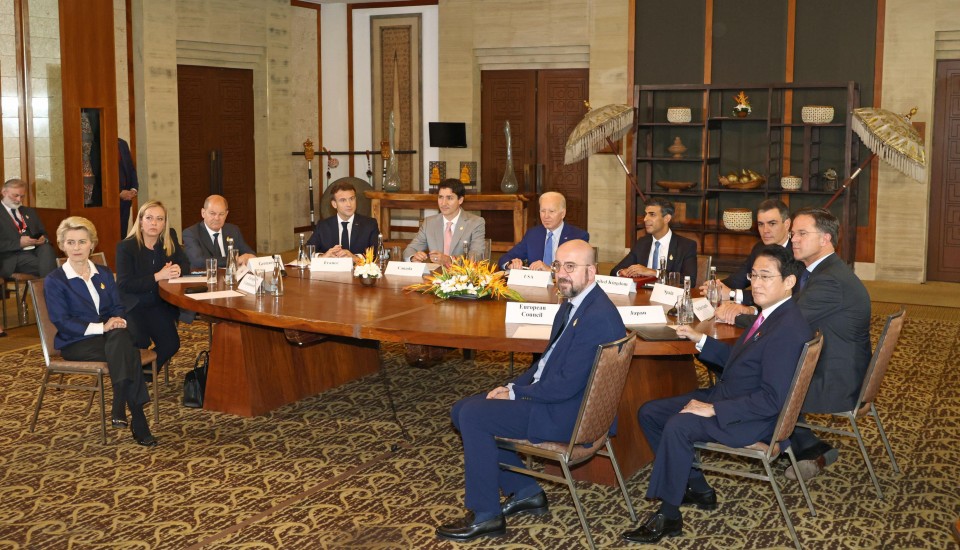 Leaders of the Group of Seven countries and some members of the North Atlantic Treaty Organization gather for an emergency meeting in Bali, Indonesia, on Nov. 16, 2022, after a missile landed in Poland amid Russia's war in Ukraine. (Pool photo)(Kyodo)

It was the first time since Russia's invasion began in February that Russian weapons came down on a NATO country, which Biden has vowed to defend. Russia's Defense Ministry has denied its military was performing strikes targeting the Ukrainian-Polish border zone, according to the country's Tass news agency.

During the emergency meeting of G-7 and NATO leaders, Japanese Prime Minister Fumio Kishida expressed his deep concern over the incident while reiterating his view that the situation surrounding Ukraine is a matter that affects fundamental elements of the international order, which is inseparable from the security of the Indo-Pacific region.

"Especially in this kind of time, I hope we can work together even more closely with the G-7, NATO and like-minded nations," he was quoted as saying, according to the Japanese Foreign Ministry.

In a joint statement issued after the meeting, the leaders of the G-7, Spain and the Netherlands said, "We condemn the barbaric missile attacks that Russia perpetrated on Ukrainian cities and civilian infrastructure on Tuesday."

They also agreed to offer "full support" for Poland's ongoing investigation and to "remain in close touch to determine appropriate next steps as the investigation proceeds," the statement said, while reaffirming their steadfast support of Ukraine as it fights back against Russia's aggression. 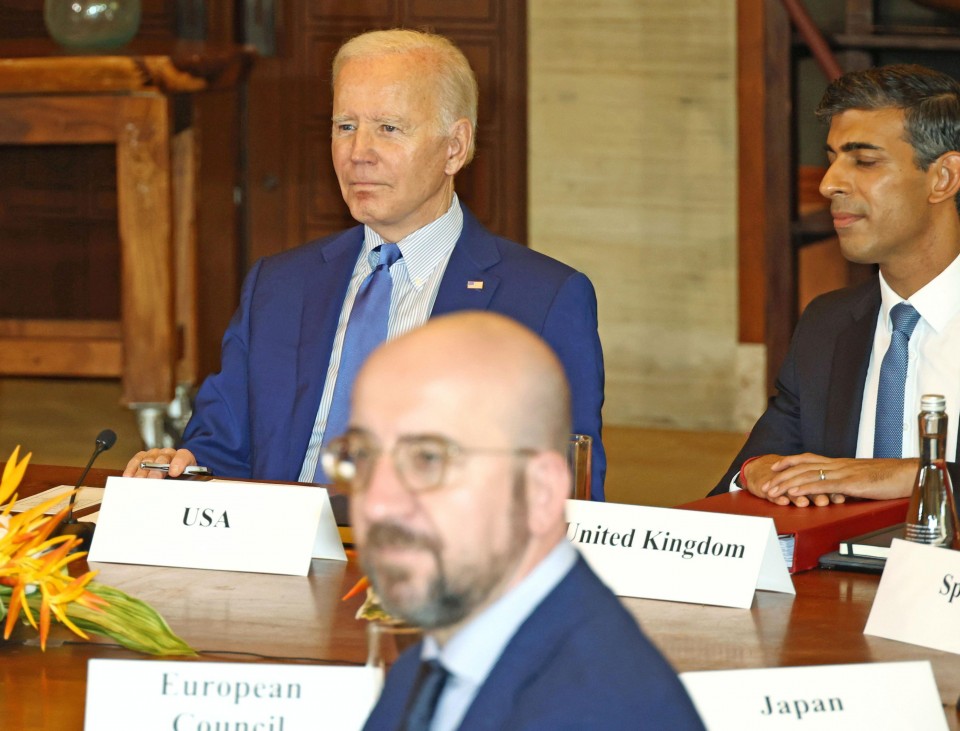 U.S. President Joe Biden (back L) attends an emergency meeting with fellow leaders of the Group of Seven countries and others in Bali, Indonesia, on Nov. 16, 2022. (Pool photo)(Kyodo)

At the outset of the bilateral meeting between Biden and British Prime Minister Rishi Sunak later Wednesday, the two doubled down on their criticism of Russia, condemning the country as "barbaric."

"At a moment when world leaders here in Bali are seeking to make progress on global peace...(Russian President Vladimir) Putin is striking civilian targets and children and women. I mean, it's just...barbaric, what he's doing," Biden said.

Kishida met in person with Sunak for the first time since the British premier took office late last month.

The two-day G-20 summit meeting from Tuesday was their first gathering since Russia invaded Ukraine, with the global economy roiled by the war, including through higher energy and food prices.

Putin skipped the meeting, with Foreign Minister Sergey Lavrov attending on his behalf.

The United States, its allies and partners have provided military equipment and other assistance to help Kyiv defend itself against Russia's aggression. The Biden administration, meanwhile, has refused to put U.S. troops on the ground in Ukraine amid fears it could be drawn into direct conflict with nuclear-armed Russia.

But Washington has vowed to defend "every single inch" of NATO territory based on the principle of collective defense -- meaning an attack on any member of the alliance is considered an attack on the alliance as a whole.

Russia began its military aggression after asserting that its security was under threat from NATO's eastward expansion and the possibility of Ukraine joining the security alliance.