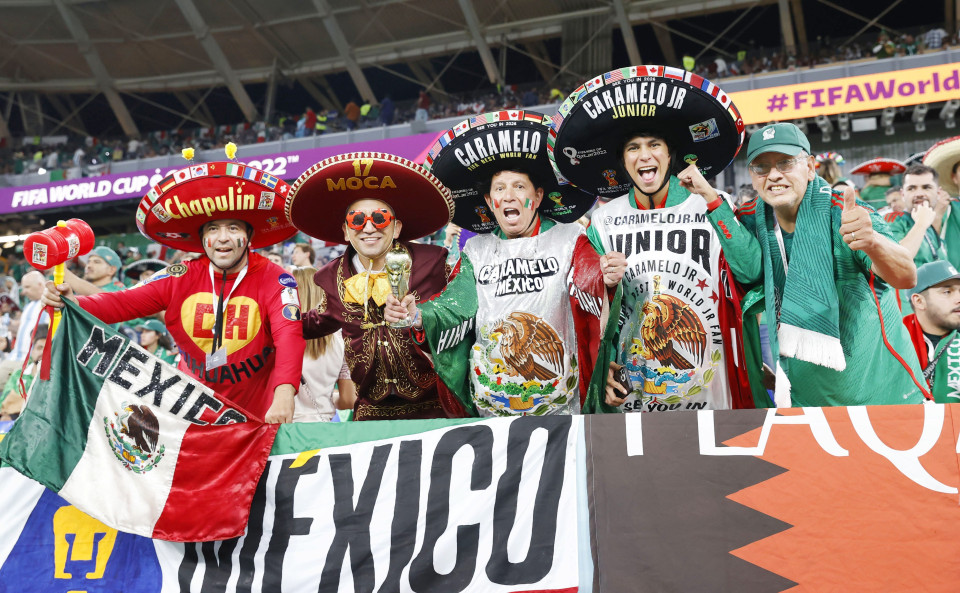 Mexico fans wearing sombrero hats pose for a photo before the start of a World Cup Group C football match against Poland at Stadium 974 in Doha, Qatar, on Nov. 22, 2022. (Kyodo) ==Kyodo

Jiang, who became the ruling Communist Party chief in 1989, oversaw an unprecedented expansion of China's economic and military might, guiding its long march toward major power status through the first years of the new millennium.

TOKYO - A Japanese court on Wednesday ruled the government's ban on same-sex marriage as constitutional, but at the same time laid further groundwork for more favorable future rulings.

While it also dismissed damages sought by plaintiffs, the Tokyo District Court pointed out the absence of a legal system to enable homosexuals to constitute a family is in a "state of unconstitutionality" and "is a grave threat and obstacle" to people's humanity.

The Shenzhou-15 spaceship was launched the previous night atop a Long March-2F Y15 carrier rocket from the Jiuquan Satellite Launch Center in China's northwest province of Gansu. It docked with the front port of the Tianhe core module at 5:42 a.m. Wednesday Beijing time, the official Xinhua News Agency said.

Questioned by Tokyo prosecutors on a voluntary basis, a secretary of Sonoura has admitted that a portion of the revenue from fundraising parties has gone unreported. They are investigating whether the fifth-term House of Representatives lawmaker, who has served posts such as a prime minister adviser, himself was aware of it.

TOKYO - Yakult Swallows closer Scott McGough will leave the Tokyo-based baseball club in a bid to pitch in the major leagues, a club official said Wednesday.

Yakult accepted the 33-year-old's departure after talk of taking a shot at the majors came up when the two sides were discussing plans for next season.

TOKYO - A Japanese court on Wednesday awarded 970,000 yen ($7,000) in damages to a woman who left a Tokyo high school after being admonished by its principal to do so in 2019 for violating a school rule that banned dating by its students.

The Tokyo District Court ruled the admonishment by Horikoshi high school was unlawful, saying it was beyond educational discretion and it effectively forced the woman to drop out of school. However, it also ruled the regulation itself was valid.

SYDNEY - Australia's parliament on Wednesday censured former Liberal Prime Minister Scott Morrison, after an inquiry deemed his secret accumulation of multiple ministries during the pandemic "corrosive of trust in government."

While it is symbolic in nature, the move marks the first time a former prime minister has been censured by parliament. The motion was passed by 86 votes to 50 in the country's lower house.

DOHA - Stephanie Frappart of France will become the first woman to referee a men's World Cup game during an upcoming match between Germany and Costa Rica, FIFA said Tuesday.

Frappart, who was also the first woman to referee a French Ligue 1 and UEFA Champions League game, will officiate the Group E match at the Al Bayt Stadium on Thursday.