The yen briefly breached the symbolic level of the 150 line against the U.S. dollar on Thursday, for the first time since August 1990, following a sharp rise in long-term Treasury yields and the prospect of aggressive interest hikes by the Federal Reserve.

The yen's continued slide, weakening about 35 yen against the dollar since the beginning of this year, also reflects the tepid economic growth experienced by Japan as it grapples to recover from the coronavirus pandemic.

The yen has been sold heavily in recent weeks, in defiance of implicit intervention warnings by Japanese policymakers, as unlike the Fed, the Bank of Japan is determined to keep its ultraloose monetary policy. 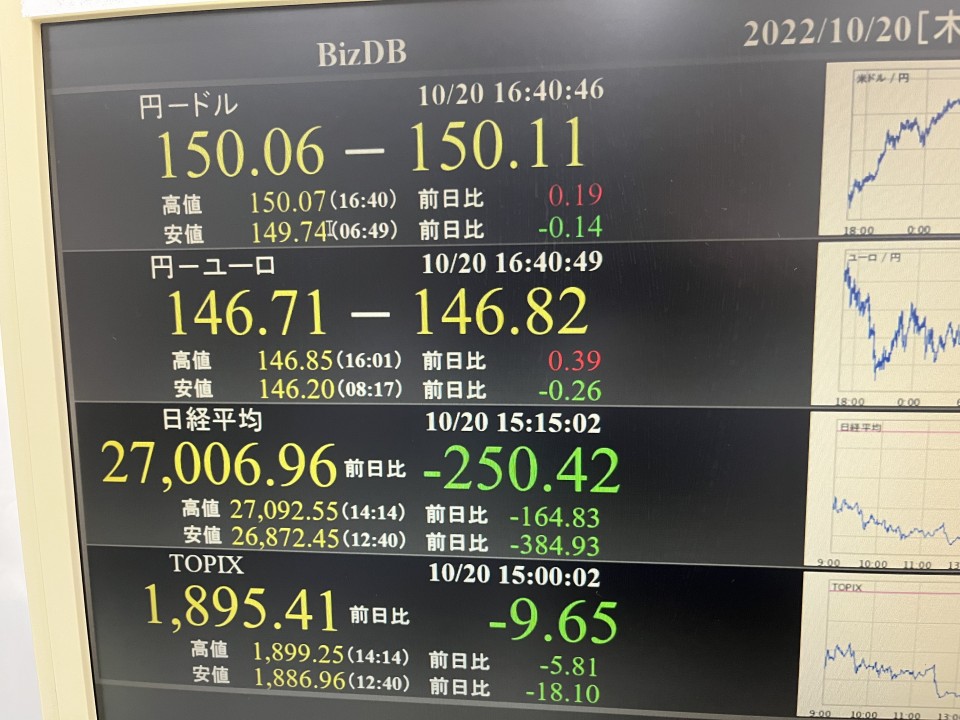 As such the interest rate gap between Japan and the United States is further widened, making the dollar more attractive.

After hitting a new 32-year low of 150.09 in Tokyo, the Japanese currency soon rebounded to the upper 149 range. But the yen's weakness, resulting in higher import prices that put a damper on private consumption, is expected to last for some time, dealers said.

The value of the yen to the dollar has almost halved from its postwar high of 75.32 hit in 2011. While the dollar briefly plunged to the lower 140 yen range following Japan's intervention in the market on Sept. 22, the yen has since depreciated, causing the dollar to soar by nearly 10 yen in under a month.

"After breaching the 150 zone, the yen is likely to test new lows. Therefore, the possibility of Japan conducting an intervention on Friday has increased," said Yuji Saito, head of the foreign exchange department at Credit Agricole Corporate & Investment Bank in Tokyo.

Earlier in the day, the yen hovered just below the 150 line as investors were wary over a possible intervention by Japan with a fresh warning from the Japanese finance minister early Thursday.

Finance Minister Shunichi Suzuki warned the government will take "appropriate steps" against excess volatility in the market, saying such fluctuations are "absolutely intolerable."

Last month, the yen's volatility spurred Japanese authorities to intervene in the currency market for the first time in 24 years after it dropped into the 145 zone against the dollar, but the move provided only a short respite.

On Thursday, the yen weakened further in Tokyo after the 10-year U.S. Treasury yield climbed to its highest level in more than 14 years, mirroring the market's view that the Fed will continue to tighten monetary policy, dealers said.

On the top-tier Prime Market, decliners were led by precision instrument, electric appliance, and glass and ceramic product issues.

Technology shares met selling on expectations of a decline in the Nasdaq index later in the day, as shares of Tesla Inc. plunged during after-hours trading Wednesday after the electric car maker's sales failed to meet market projections.

The yield on the bellwether 10-year Japanese government bond was unchanged from Wednesday's close at 0.250 percent. It briefly hit 0.255 percent, rising above the 0.250 percent upper limit set under the BOJ's low rate policy for the second consecutive day.

Japan dangles threat of "decisive" steps as yen slips past 150

Yen falls to fresh 32-year low in lower 149 zone vs. dollar in London